The Amazon.com Inc. fulfillment center in Bessemer, Ala., is pictured on March 28, the day before the deadline for employees to vote in the union election.
Photographer: Patrick T. Fallon/AFP via Getty Images

A National Labor Relations Board officer has recommended a do-over election at the warehouse in Bessemer, Ala.—a stunning reproach of the e-commerce giant for allegedly manipulating the initial election earlier this year.

The Retail, Wholesale, and Department Store Union held an election last spring to represent Amazon workers at the Bessemer fulfillment center. The organizing drive attracted global attention because it would have been the first Amazon warehouse in the U.S. to unionize—an achievement that could have opened the floodgates at warehouses nationwide.

But things didn’t go as planned for the RWDSU. The union got routed, thanks to Amazon’s heavyweight legal team led by former Republican NLRB member Harry Johnson.

RWDSU wasted no time filing a legal challenge alleging that Amazon may have broken the law.

(2) What’s the deal with that mailbox?

The union’s complaint centered around what might seem like an innocuous object: a standard U.S. Postal Service mailbox.

While union elections are usually held in person at the workplace, the Amazon election was one of many that took place via mail due to the Covid-19 pandemic.

As a result, Amazon asked the USPS to install a mailbox near the entrance of the facility, ostensibly so that workers could drop off their ballots. The box was placed in view of company security cameras, and RWDSU said it lent the false impression that Amazon played a role in counting the ballots, coercing workers to vote “no” or not vote at all. 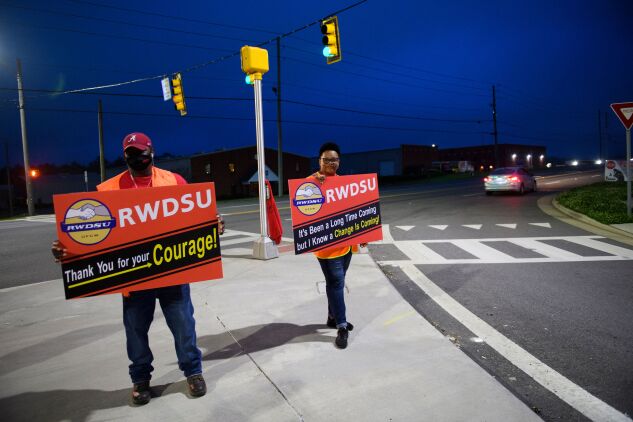 The NLRB hearing officer, Kerstin Meyers, agreed with the union, saying that Amazon’s push to install the mailbox spoiled the “laboratory conditions” necessary for a free and fair election.

“The Employer’s conduct in causing this generic mail receptacle to be installed usurped the National Labor Relations Board’s (Board or NLRB) exclusive role in administering Union elections,” Meyers wrote in her recommendation. “Notwithstanding the union’s substantial margin of defeat, the employer’s unilateral decision to create, for all intents and purposes, an onsite collection box for NLRB ballots destroyed the laboratory conditions and justifies a second election.”

(3) What exactly did the NLRB officer do?

After weighing the arguments on both sides, Meyers recommended that the NLRB order a second election. Again, that’s a recommendation—the final decision will be up to the NLRB regional director in Atlanta.

In addition to the mailbox, Meyers found that Amazon influenced the election results by distributing “vote no” paraphernalia in front of supervisors and managers as a means of polling employees.

Although Meyers’ recommendation isn’t ironclad, it’s still a big deal. A federal official is now on the record saying Amazon’s conduct was beyond the pale, validating the union’s claims of tampering.

(4) So will there be a new election in Bessemer?

Maybe. The decision is up to the NLRB regional director in Atlanta, and depending on how it goes, Amazon could appeal to the full board. The whole process could take weeks or months to sort out, but for now, things are looking in the union’s favor.

That would be the full five-member NLRB in Washington. This is where RWDSU has an advantage: By the time an appeal would get to the board, three Democrats will hold the majority, including two union attorneys recently appointed by President .

Needless to say, they’d be more sympathetic to the union than the pro-business attorneys appointed by former President Donald Trump. And that might just be enough for the union to prevail.

Amazon Access to Mailbox Could Be Grounds to Overturn Union Vote