Boxes move along a conveyor belt at an Amazon fulfillment center on Jan. 20, 2015, in Tracy, Calif.
Photographer: Justin Sullivan/Getty Images

The union loss against in Bessemer, Ala. marks a stinging defeat for the U.S. labor movement, one made all the more painful by its familiarity.

In recent decades, top nonunion American companies have been virtually impervious to organizing efforts, particularly those that come down to elections overseen by the National Labor Relations Board. That trend continued at Amazon’s warehouse in Bessemer, where workers voted 1,798 to 738 against joining the Retail, Wholesale, and Department Store Union. While 505 disputed ballots remain unopened, they won’t reverse the outcome, announced Friday.

“Today’s announcement,” RWDSU President Stuart Appelbaum told reporters after the ballots were tallied, “may not be what we wanted, but sadly it is one that many have come to expect.”

The election had signaled a massive shift in Amazon’s labor relations. A few years ago, collective action by Amazon employees was , but the safety issues into high relief by the Covid-19 pandemic, in tandem with increased funds and focus from unions, have strikes and protests at the company’s warehouses more common. The #BlackLivesMatter movement and organizing efforts by Alabama poultry workers also helped RWDSU sign up thousands of Bessemer employees. It wasn’t enough.

Amazon may well spend years battling the union over the legality of the tactics it used to win in Bessemer, but whatever happens there, the election outcome will be cited as vindication for the company’s employment policies for a long time to come. In a statement, the union accused Amazon of “corrupting” the election through tactics such as pressuring the U.S. Postal Service to install a mailbox on the company’s property and pushing workers to cast their mail-in ballots there. “Our system is broken, Amazon took full advantage of that, and we will be calling on the labor board to hold Amazon accountable for its illegal and egregious behavior,” Appelbaum said. An Amazon spokesperson said the mailbox was a “simple, secure, and completely optional” way to make voting easier.

The organizing effort may have suffered from some of RWDSU’s strategic choices, such as agreeing to Amazon’s push that they accept votes during the seven-week election from hundreds of additional employees, including temps. But the bigger challenges were the structural that face workers trying to organize at any major nonunion company in the U.S.

Companies are allowed to force workers into group meetings and one-on-one discussions that include predictions of dire consequences in the event of unionization. (Employees Amazon did so in Bessemer; the company says it hosted “information sessions” so employees could “understand the facts.”) “Being under the watchful eye and control of the employer all day long—and subject to the messages of the employer, for which there’s no equal time for the union—detracts from it really being a fair and free election,” says , a former chair of the National Labor Relations Board. 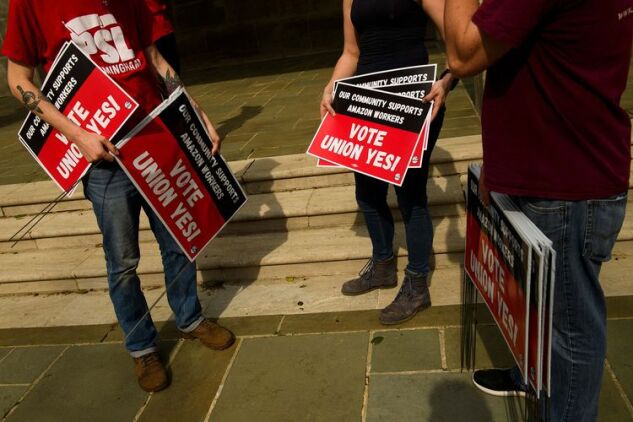 Employers also have incentives to illegally punish or fire activist workers, which labor board prosecutors have accused Amazon of doing at other warehouses. (An Amazon spokesperson says the company has “zero tolerance” for retaliation.) If a company is found to have broken the law in such a manner, it may have to provide workers with back pay and to post signs promising not to repeat the illegal behavior, but it will pay no punitive damages and managers face no personal liability.

On the flip side, employers legally compelled to complete a union contract in a specified period of time, so about half of workers who win union votes won’t have a union contract a year later. Some companies simply shut down operations that unionize. Several Bessemer workers this prospect weighed on them during the election.

Given these headwinds, union organizers sometimes eschew standard labor board elections in favor of what they call comprehensive campaigns, a mix of workplace protests and pressure from consumers, politicians, and the media. The idea is to force company executives to agree to more favorable terms for unionization and contract processes. RWDSU’s parent, the United Food & Commercial Workers International Union, succeeded with such an approach at Smithfield Foods Inc. in 2008. After a campaign that included lobbying Oprah Winfrey to keep Smithfield ham off her show, the UFCW reached a deal with the company that restricted union busting and won a vote to organize about 5,000 North Carolina slaughterhouse employees.

Such victories, however, have been rare. Yearslong union-backed campaigns targeting Walmart and McDonald’s, for example, helped get workers raises and win better treatment for pregnant employees, but won unionization. At Amazon, neither labor board elections nor multipronged pressure campaigns have secured any formal union foothold in the U.S.

Amazon abandoned its plan to put a second headquarters in New York after RWDSU pressuring local politicians to condition development on the company agreeing to curb union busting. The $15 minimum wage, which Amazon credited critics like Senator Bernie Sanders with helping persuade it to , is now a talking point the company’s public relations team uses to rebut the senator’s claim that its workers need a union. There are also legal limits on just how comprehensive a comprehensive campaign can get. Federal law restricts unions from involving business partners in a dispute with a particular company—such as by picketing Amazon suppliers to demand they cut off the company—and states from trying to create local, stronger versions of the National Labor Relations Board.

Unions have failed to reform federal labor laws for most of the past century, stymied repeatedly by fervent Republican opposition, Democratic ambivalence, and the Senate filibuster. Joe Biden campaigned on a sweeping pro-union reform bill, the PRO Act, and the U.S. House passed it in March. Among other things, the legislation would ban employers from holding mandatory anti-union meetings, let the National Labor Relations Board fine companies that break the law, and employ arbitrators to ensure that unions can secure contracts. But it faces long odds in the Senate, where not all Democrats are sold on the bill or on abolishing the filibuster to pass it.

Some labor advocates say the legal system needs to be overhauled if labor organizing is ever going to rebound, while others argue that only a huge upsurge in labor activism can drive such changes. A surprise win in Bessemer might have proven a rallying cry for reform efforts. Now organizers have to hope their defeat there can serve that role instead. “The history of the labor movement has been about failing forward,” says Janice Fine, a labor studies professor at Rutgers University. “Even when they lose,” she says, “they’ve framed a moral dilemma for the community that they’re organizing in—or for the country.”

To contact the author of this story:
in San Francisco at jeidelson@bloomberg.net