The Transportation Security Administration is a revolving door for more than 8,000 screeners at 10 of the busiest airports in the U.S., data obtained by Bloomberg Law suggest.

The TSA hired nearly as many agents at some sites as left their jobs between 2012 to 2016, according to information provided by the agency in response to a Freedom of Information Act request. The TSA doesn’t separate the data by why an employee left, so the numbers include those who quit, were fired, or retired.

The high turnover adds to an already difficult work environment and can have a long-term effect on aviation security and airport service during a time when air travel is at an all-time high, sources said.

An annual survey of thousands of federal employees may shed some light on why so many agents are leaving. The Department of Homeland Security, of which the TSA is a part, ranked last among large agencies in the 2017 Best Places to Work survey of federal employees, and it has been in the basement for a number of years.

The TSA employs a total of about 11,700 screeners at the 10 airports. The turnover rate across those sites ranged from 30 percent to more than 80 percent over the five years analyzed. Turnover among federal employees overall has hovered around 15 percent during the past three years, Hausknecht said.

A spokeswoman for NASA, the top-rated agency in the same federal employee survey, told Bloomberg Law that the retention rate was 4.9 percent over the last five years.

In the two most recent years of the survey, the TSA showed improvement “across every survey category, including a three-point increase in the Employee Engagement Index, a key Office of Personnel Management metric focusing on engagement and morale. We believe this is a very promising trend,” she said.

“As does any federal agency, TSA experiences the ebb and flow of employees,” Farbstein said. “Yet there is always room for greater improvement and job satisfaction, and we are continuing to commit to our people.”

So, what’s behind the turnover?

“Part of the problem is it can be a mind-numbingly boring job,” Jeff Price, professor of aviation and aerospace at the Metropolitan State University of Denver, said. Agents may come in wanting to serve their country but leave the first day wondering what they got themselves into, he said.

Full- and part-time staffers receive health insurance, retirement benefits, and paid leave. The starting annual salary can range from $34,000 to $45,000, depending on location. The job entails standing for long hours, potentially dealing with threatening situations, and day-to-day monotony. All of that can contribute to frequent departures, Glen E. Winn, an aviation security specialist, said. 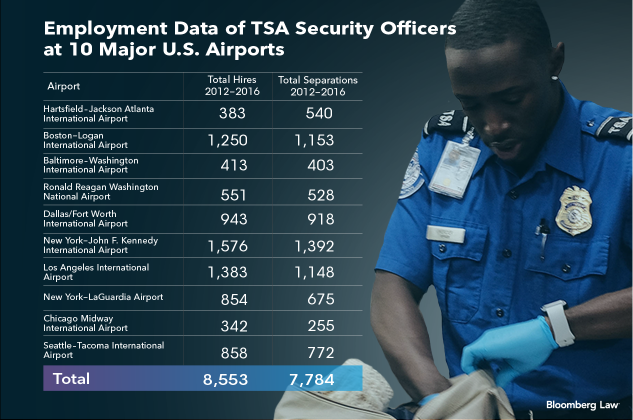 Becoming a security officer is a months-long process that includes an English language competency exam, interview, background check, medical evaluation, and training. Officers must also be trained to read an X-ray machine.

After that, many officers jump ship before the end of the usual two-year probationary period because the job is far tougher than what the pay makes up for, said Hydrick Thomas, president of the American Federation of Government Employees Local 2222. That local represents TSA agents in New York and New Jersey.

LaGuardia and Kennedy International airports in New York are both among the 10 examined for turnover rates. The others are in Atlanta, Baltimore, Boston, Dallas, Los Angeles, Chicago (Midway), Washington (Reagan National) and Seattle-Takoma.

Security officers don’t work a traditional 9-to-5 schedule. Staffing is required during early mornings, late nights, weekends, and holidays. Newer employees are likely to work the tougher shifts to start, according to a video for potential candidates on the TSA’s website.

Agents must stand, bend, and lift heavy bags. They repeatedly give travelers instructions, check the ID of potentially thousands of people a day, and must address the needs of angry passengers. All things that take a special kind of patience, Price and Winn said.

There’s also a very real threat of danger. Approximately one in 200,000 travelers brought guns to checkpoints nationwide in 2017, and 84 percent of those guns were loaded, according to the TSA.

“If you’re the new guy on the block and have never been faced with that before, it could be a little scary,” Winn said.

Agents also leave for other opportunities. The TSA hires entry-level officers who often use their experience “as a gateway to other federal jobs within Homeland Security,” Farbstein said.

Turnover in any workplace comes with a price as employers have to hire and train new workers. A high turnover threatens stable operation, Hausknecht said.

Over the years, the agency has gotten better at listening to employee feedback and is holding itself accountable for making improvements, Farbstein said.

The TSA marked a record-breaking summer travel season in 2018, screening 253 million travelers and airline crew—the busiest in TSA history, it said. With the ever-rising number of passengers hitting the skies, the agency runs the risk of longer waits and angrier passengers if retention isn’t improved, Winn said.

The agency’s main mission of aviation safety at busy airports is also at risk.

“All of that institutional knowledge is walking out of the door,” Price said.

(Updated to include comments inadvertently omitted that describe recent survey results showing improved engagement and morale at the TSA.)