A ruling in favor of the airlines in any of the lawsuits could mean flight crew or ground crew workers across the country lose access to sick leave benefits. If state and city laws were to prevail, airlines would face a complex patchwork of compliance for employees nearly always in transit.

Flight crews present the biggest problem. A Boston-based flight attendant who routinely crosses several states for work might start out at Logan International Airport where they’d get 40 hours of paid sick leave per year under Massachusetts law. But if the worker jumps on the Eastern Seaboard shuttle—flying between LaGuardia, John F. Kennedy, or Ronald Reagan National airports—they’d have to figure in New York City’s paid sick leave for anyone working in the city at least 80 hours per year. And the District of Columbia’s requirement that any worker who spends more than 50% of their work time in D.C. gets seven days of paid sick leave, or 52.5 hours, each year.

Add O’Hare or Midway airports to the mix, and Chicago’s paid sick leave for anyone who works at least 80 hours over 120 days comes into play.

“This position is unworkable for airline operations because 36 state and local jurisdictions have enacted paid sick leave laws and regulations, and many of these laws have varying or even conflicting provisions,” a spokesman for Airlines for America, the plaintiff in lawsuits in Massachusetts and Washington, told Bloomberg Law. “Airlines cannot operate their nationwide systems properly if flight crews are subject to the employment laws of every state in which they are based, live, or pass through.”

Airlines for America, a trade group that represents various air carriers including and filed lawsuits in Massachusetts and Washington in June 2018, arguing that state laws violate federal rules governing air travel. In 2019, American Airlines sued New York City after the Department of Consumer Affairs cited the airline for violating its sick and safe leave law.

To date, however, courts haven’t weighed in on whether airline workers should be exempt from state and paid sick leave laws.

And though many airline workers are covered by collective bargaining contracts that include time off for illness, local laws increasingly are requiring more generous benefits than those negotiated.

“Typically our contracts have been better than state laws,” said Sara Nelson, president of the Association of Flight Attendants-CWA. Recently, however, local activity and grass-roots movements for state laws are passing paid sick leave bills that “fill gaps that might exist in our contract,” she said.

With employees constantly traveling around the world, airlines already must track scheduling, weather, and other “irregularities” every day, Nelson added. “So for them to argue that this is too complicated is really pretty absurd.”

In the lawsuits filed in Massachusetts and Washington, an unnamed carrier said it had to close a flight attendant base because compliance with a local jurisdiction’s paid sick leave law led to a rapid increase in the number of worker sick calls, which disrupted the airline’s operations.

American also cited service disruptions caused by sick leave mandates, claiming the NYC law interferes with its nationwide attendance and reliability policies. The airline’s lawsuit followed a lawsuit by the NYC Department of Consumer and Worker Protection July 25 when it sued the air carrier for violating the city’s paid sick leave law for workers at JFK and LaGuardia airports.

After an investigation into American Airlines’ practices, the agency alleged the airline violated the law by assigning disciplinary points for each sick day used by ground crew workers, thereby retaliating against employees for using sick leave.

“American Airlines employees enjoy generous sick leave and benefits, including those set by union contracts with terms that are often more generous than required by the New York law,” an American Airlines spokesman said.

“It’s a decades-old problem with the airlines,” said Sherry Leiwant, co-president of workers’ rights advocacy group A Better Balance. It boils down to whether state and local paid sick leave laws affect airline routes, part of the federal Airline Deregulation Act, Leiwant said. “Giving them a few hours of sick leave won’t do that.”

Eleven states, the District of Columbia, and 22 localities have passed paid sick leave laws. They generally say that individuals working within the city or state must be able to accrue paid sick leave for hours worked, and can take that leave without fear of retaliation. 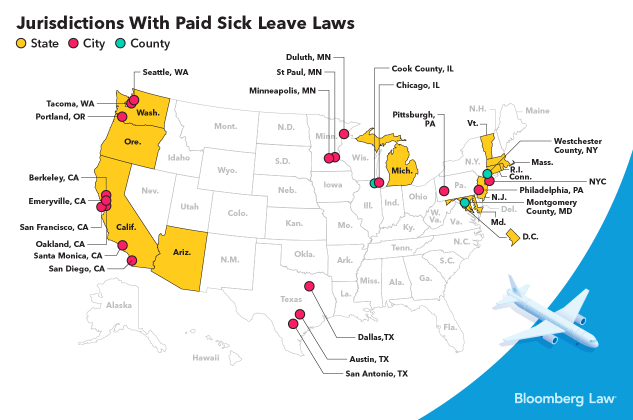 But in some jurisdictions, airline employees already may be exempt from the rules.

California’s paid sick leave law has a carve-out for flight crews, specifically. The 2014 law states workers for an air carrier flight deck or cabin crew members who receive compensation time off equal to the amounts in the new statute are exempt from compliance.

Several state and local laws allow for workers under a union contract to be exempt from sick leave laws if the contract expressly waives coverage under the ordinance, or the labor agreement can modify sick leave benefits. Jurisdictions with a waiver option or bargaining option include Arizona, Seattle, Tacoma, Austin, San Antonio, and Dallas.

Flight crews may be the focus of the lawsuits against state and city paid sick leave laws, but ground crews at airports across the country also should have exemptions, the airlines argued in the lawsuits.

These workforces may not have the same travel complexities for compliance with paid sick leave laws, but the leave regulations undercut some collective bargaining agreements, the carriers said in court documents. Ground crews are covered by separate, nationally bargained union contracts, and the sick leave benefits in each contract may differ from paid sick leave laws in states and cities.

“When it comes to their policies, they’ve bargained with these employees and they’ve agreed to a certain benefit,” said Jackie Gessner, an employment law attorney with Barnes & Thornburg in Indianapolis. “The states disrupting those agreed-upon benefits is another level of complexity and frustration.”

How courts rule on the issue could reach beyond just the travel industry.

Airlines aren’t the only employers trying to figure out, “What laws do I have to comply with and do they cover me?” Gessner said. “If you have people located in different places you’re at a loss as to how to adopt a policy that can fit with all of these jurisdictions.”

There are hints about how courts could rule in previous decisions involving flight crews and wage and benefits rules.

The U.S. Court of Appeals for the Ninth Circuit said flight attendants could sue airlines based on state and local minimum wage and employment laws. The appeals court found that the Railway Labor Act didn’t preempt Washington’s sick leave law, and a flight attendant could use sick leave to care for her child. While sick leave care for a child wasn’t designated in the employee’s collective bargaining agreement, it was specified under state law.

In April, the Supreme Court declined to review the appellate court’s decision.

The high court again sided with workers when it declined to review a decision from the Seventh Circuit allowing a class action involving flight attendants’ state wage-and-hour class action to move forward.

To contact the editors responsible for this story: at csaenz@bloombergtax.com; at mmuellerneff@bloomberglaw.com