Longtime AFL-CIO official has been selected president of the nation’s largest union federation, becoming the first woman to serve in a role regarded as the leader of the U.S. labor movement.

Shuler, who previously held the No. 2 spot as the federation’s secretary-treasurer, was tapped Friday by the AFL-CIO executive council to serve out the last 10 months of late President Richard Trumka’s term, making her the instant front-runner in next year’s race for the federation’s presidency. Trumka died of an apparent heart attack at age 72 on Aug. 5.

Shuler served as Trumka’s second-in-command for more than a decade. She headed the federation’s efforts to adapt to technology, green energy, and to marshal a younger and more diverse population of union workers—endeavors she vowed to further during her history-making tenure.

“We are half the labor movement—not many people realize the labor movement is the largest organization of working women in the country,” Shuler said Friday in an interview on Bloomberg TV. “I intend to stand on the shoulders of those giants, the women who have come before me, the women who have led those strikes and are on the picket lines, and also the quiet strength of women in the workplace who have been leaders in every workplace around our great country.”

Shuler pledged to keep fighting to abolish the Senate filibuster to break the logjam on labor law reform, and to keep organizing grassroots campaigns in all 50 states to pressure lawmakers.

“We are laser focused on continuing that fight on Capitol Hill, but, more importantly, in the streets,” she said. 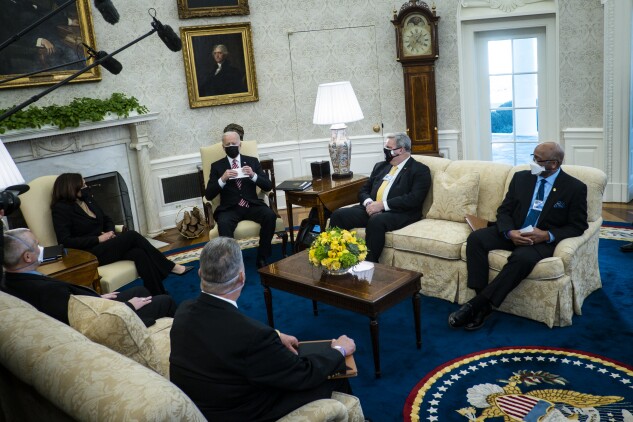 
The daughter of an Oregon power worker, Shuler quickly rose in the male-dominated International Brotherhood of Electrical Workers before Trumka selected her as his running mate in 2009. Their victory made her the highest-ranking woman in the federation’s history, a distinction she welcomed with tongue-in-cheek humor.

“Some things you’ve become accustomed to in your secretary-treasurer are going to change,” Shuler said in a speech at the convention that year. “I am totally committed to never, never, never grow a mustache.”

Shuler will now have to compete for a full four-year term at the AFL-CIO convention in June 2022. She was believed to have been considering a run if Trumka had decided to step down.

Shuler was the only candidate nominated Friday after Association of Flight Attendants President Sara Nelson, long seen as an anti-establishment contender, decided not to run. Shuler was chosen by acclimation—meaning there was no roll call vote—after her candidacy was seconded by American Federation of Teachers President Randi Weingarten, according to a person with knowledge of the decision.

Shuler’s status as an incumbent and close ties to building trades unions will give her a distinct advantage in next year’s election.

Nelson hinted she might run in 2022, saying through a spokesman Thursday that there’s “no doubt this next year leading up to an open convention provides a basis for lively discussion and debate about how to make unions and the rights that come with them accessible to all working people.”

Shuler is expected to further Trumka’s philosophy of using the AFL-CIO’s resources to wield political influence for organized labor in Washington—an idea that’s been challenged by left-leaning factions of the federation—Nelson included—who believe leadership should invest more in new organizing campaigns.

To succeed in that aim, Shuler will have to maintain Trumka’s relations with the Biden administration—a difficult task, given his close personal bond with the president. Trumka brought Shuler to the Oval Office to meet with President in February, which some interpreted as Trumka preparing her to take his place.

Shuler views grassroots efforts as one way to maximize the federation’s influence in the Senate, which has stalled on the Protecting the Right to Organize Act, a sweeping piece of pro-union legislation approved by the House in March.

“The law is not working for working people—it’s working for big corporations” Shuler said during the Bloomberg TV interview. “And we need to use those levers.”

(Updated with comments Shuler made on Bloomberg TV, in paragraphs 4-6 and 17.)