The broad retirement savings bill enacted last year has raised a boatload of logistical questions from tax practitioners, but there are a manageable number of “must dos” on which they expect government guidance soon.

The Setting Every Community Up for Retirement Enhancement (SECURE) Act is a package of tax breaks featuring effective dates that stretch from over a decade ago to four years down the line. The bill rewards companies that offer employer-sponsored retirement plans and gives account holders more time to grow their nest eggs.

About one-third of SECURE’s changes are mandatory, meaning administrators must abide by them to retain the tax-preferred status of their retirement plans. Most of the bill’s provisions took effect Jan. 1, less than two weeks after it was signed into law. Industry professionals hope that quick turnaround will spur equally speedy delivery of relevant guidance documents.

Practitioners say one way to cut through the immediate confusion would be for staff at the Treasury Department, Internal Revenue Service, and Employee Benefits Security Administration to clarify how plan sponsors can implement the law’s mandatory provisions in short order. Administration officials could then move on to explaining voluntary modifications under the law that employers can adopt at will. 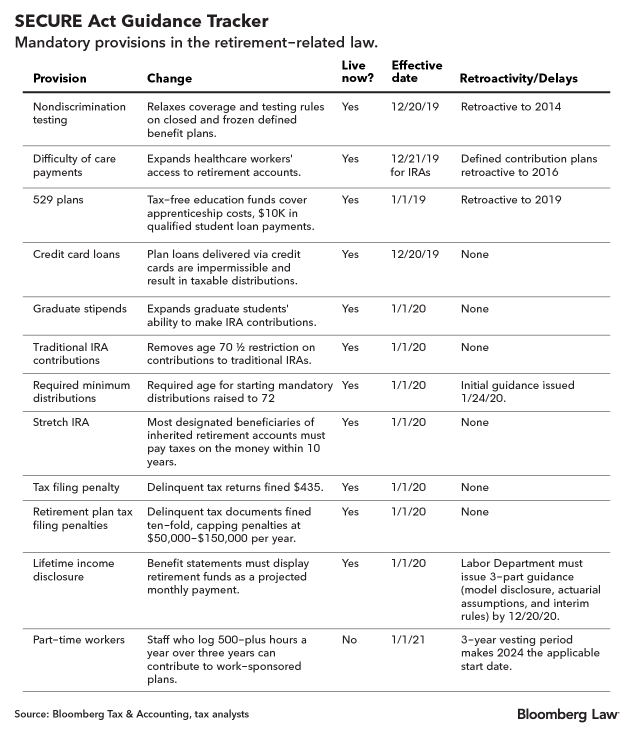 The Treasury Department didn’t respond to repeated requests for comment about its regulatory agenda. Administration aides have previously said that working through the particulars of President Donald Trump’s 2017 tax cut and his benefits-related executive orders remain their top priorities.

Treasury attorney-adviser William Evans in late January told tax conferees, without offering any details, that the agency plans to roll out SECURE Act-related guidance in phases: near-term (spring), interim (summer), and long-term (end of the year).

The IRS took its first action on the SECURE Act in late January, issuing a quickie fix to save retirees younger than 72 from prematurely drawing down their accounts. Pre-SECURE Act policy required people over 70½ to begin paying taxes on their lifelong savings, and plan administrators had until Jan. 31 to notify people reaching that age in 2020. The IRS notice said it will overlook faulty statements sent to retirees caught between the old and new age limits as long as plan administrators issue corrected statements by April 1.

“The task of interpreting and applying the SECURE Act and resolving unanswered questions raised by the legislation will involve a substantial amount of work for both EBSA and Treasury/IRS,” he wrote in an email. He’s now a senior fellow at the Brookings Institution.

Practitioners have been peppering government officials with SECURE-related questions for months.

Trump signed the law Dec. 20, and it took hold in January, leaving employers little time to retool their retirement plans. Prioritizing the SECURE Act’s mandatory provisions for regulatory guidance appeals to tax professionals whose clients are asking what’s most important to change now. Treasury officials don’t typically reveal how they plan to distribute guidances, but they have indicated they’re listening to the practitioners’ requests.

Veena K. Murthy is a former legislation counsel for the Joint Committee on Taxation turned partner at Crowe LLP, where she is the Compensation and Benefits Tax Services Leader in the firm’s Washington National Tax Office. She discussed on Bloomberg’s “Talking Tax” podcast the merits of tackling first the handful of mandatory provisions in the SECURE Act. In her former job, she provided tax technical and policy advice to the House of Representatives Ways and Means Committee and the Senate Finance Committee. Murthy helped lawmakers craft the Secure Act.

That’s among the areas where IRS officials said they’ve received the most questions. Employers can opt to allow workers to withdraw up to $5,000 without penalty for a new birth or adoption. But if they do, employers must also accept repayment of those funds into perpetuity under the new law.

“Once an employer allows that type of distribution, they mandatorily must allow that employee to recontribute those amounts until the end of time,” Murthy said. That repayment feature could lead to “a lot of potential errors” and “potential disqualification.”

“I’m wondering if people are gonna do it, frankly,” she said.

Another change where tax professionals are seeking immediate guidance involves extending retirement account access to part-time staffers. Under the new law, workers who log more than 500 hours a year over three years can contribute to employer-sponsored retirement plans.

That requirement doesn’t take effect until 2021. The three-year vesting period, in practice, extends the date to 2024, which Murthy said is “the most reasonable effective date.”

The law also requires people who inherit IRAs to cash out fully within 10 years, which has spawned a host of questions from estate planners. “Stretch IRAs” were a tactic used to pass money from generation to generation without accruing tax. The SECURE Act effectively ended that option.

Murthy downplayed the “hullabaloo” about the change. She noted that prior law permitted some withdrawals of passed-on retirement accounts within five years.

“It’s really just affecting incredibly wealthy people who do estate planning,” she said. “But for the average person, it’s probably doing nothing.”

One change that raised a lot of questions even before it was mandated involves telling retirees how much they can expect per month in their benefits statements. Labor Department officials put out feelers in 2013 about requiring benefit statements to include snapshots of expected monthly payments, but the project was never completed.

Finishing it now will be a three-part process for EBSA. They’ll issue a model graphic illustrating how the monthly distribution should be presented to account holders. They’ll also prescribe the uniform economic data that actuaries should use to calculate the monthly payment projections. And they’ll issue interim rules explaining what the income projection means. All of that must be completed by Dec. 20.

“I don’t think this is a heavy lift for them,” he said. “They’ve done a lot of work already.”

(Editor’s Note: The information Murthy provided on the podcast and for this story is not—and is not intended to be—audit, tax, accounting, advisory, risk, performance, consulting, business, financial, investment, legal, or other professional advice. The information is general in nature, based on existing authorities, and is subject to change.)