The headquarters building of the U.S. Securities and Exchange Commission in Washington, Dec. 22, 2018.
Photographer: Zach Gibson/Bloomberg via Getty Images

The YouTube video encourages “real Americans” to urge Securities and Exchange Commission Chairman Jay Clayton to clamp down on proxy advisory firms that, they say, are imposing a liberal agenda on corporate America.

“We’re seeing abortion, climate change, sanctuary cities, gun control,” Holly Turner, a frequent guest on Fox News, says on the video, sitting next to her conservative-activist husband, Chris Turner. “These are all issues now that these companies are being forced to deal with.”

The SEC has received more than three dozen comment letters backing a proposal targeting proxy firms since the Turners posted the seven-minute advocacy tutorial on YouTube on Jan. 3. At least two letters reference the video, which has more than 700 views, and several more recall some of the language in it.

The video, and response to it, comes after Clayton said he was looking into allegations that the 60 Plus Association, an advocacy group for seniors, helped write and send questionable comments supporting new rules for proxy firms such as Institutional Shareholder Services Inc. and Glass, Lewis & Co.

The firms advise institutional investors how to vote on proposals made by shareholders at public companies’ annual meetings. Those proposals have increasingly covered such issues as climate change and gun control, though no companies in the Russell 3000 index voted on proposals focusing on abortion or immigration last year, Bloomberg data shows. 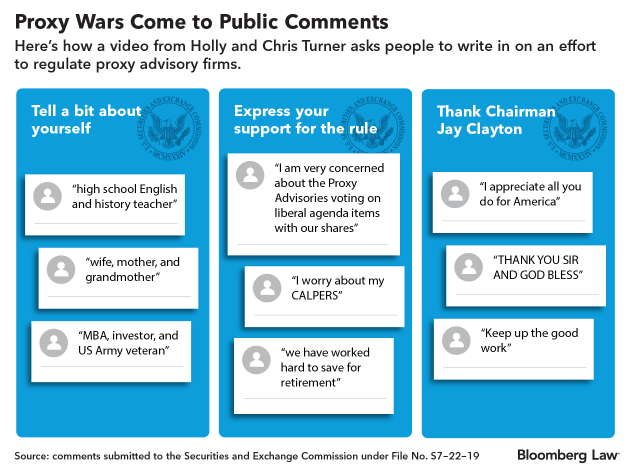 Clayton cited some of the letters from the 60 Plus campaign while announcing proposed rules, but some people whose names were on the letters said they didn’t send them, Bloomberg News reported. The SEC has also gotten messages from certain email addresses that sent a different templated letter indicating the email address’s owner didn’t submit it. Those almost 5,000 letters, which appear to be organized by an environmental group, oppose related rules to curb shareholder activism.

Letters submitted since the video posted have been signed by teachers, veterans, and retirees, many of whom identify as conservatives. Some don’t mention proxy advisers.

Melissa Sharpley, who cited the video in a letter to the SEC, told Bloomberg Law she knows Chris Turner, and he alerted her to the issue. The 80-year-old retiree from Raleigh, N.C., said she then sent the video to friends and other people she knows.

“They suggested sending it to everyday Americans,” Sharpley said.

Thomas Terramani, who also wrote to the agency, couldn’t remember how he came across the video, but said it was informative.

“I never would have known how to contact the SEC,” the 54-year-old physician from San Diego told Bloomberg Law.

Holly Turner, an attorney, previously worked for the Trump administration as a regulatory reform officer at the Small Business Administration. She has appeared a number of times for discussions on Fox News and in other news outlets, including a Bloomberg podcast. Chris Turner sits on the board of the American Conservative Union.

The Turners run Stampede Consulting, which conducts what its website calls grassroots campaigns for conservative candidates and causes. The Republican National Committee is among the firm’s customers, according to Federal Election Commission records.

Nell Minow, a shareholder advocate who used to work at ISS and in the federal government, called the video “insane.”

“This is just another example of bad actors taking well-intentioned systems put in place for democracy and abusing them,” said Minow, vice chair of ValueEdge Advisors, which works with institutional investors on corporate governance.