Legislation that would require most U.S. businesses to offer their workers basic retirement benefits could add a new generation of first-time savers to the economy while forcing millions of small employers to navigate the costly world of benefits on their own.

The House Ways and Means Committee’s bill, part of a $3.5 trillion tax-and-spend plan Democrats are developing, has drawn a clear line in the benefits industry between companies that would stand to gain and those that could lose money. Straddling that fence are more than 62 million workers who still aren’t saving for retirement.

Data from Pew suggests that workers are most likely to save for retirement if their employers give them the option. Automatically setting up plans, escalating contributions, and investing early retirement assets takes pressure off first-time savers afraid of going it alone.

But tax credits and simpler, pooled plan arrangements lawmakers rolled out recently haven’t made a substantial dent in the number of small employers that don’t offer simple 401(k) or individual retirement account benefits. Only about half of private-sector businesses with 100 or fewer employees offer workplace retirement savings, compared to 94% of companies with 500 or more workers, according to the U.S. Bureau of Labor Statistics.

“American retirement savings are woefully inadequate,"said Susan Lubow, a partner at Baker & Hostetler LLP in Columbus, Ohio. “Maybe this goes too far, or maybe it doesn’t go far enough, but, ultimately, I think it’s a good place to start.” 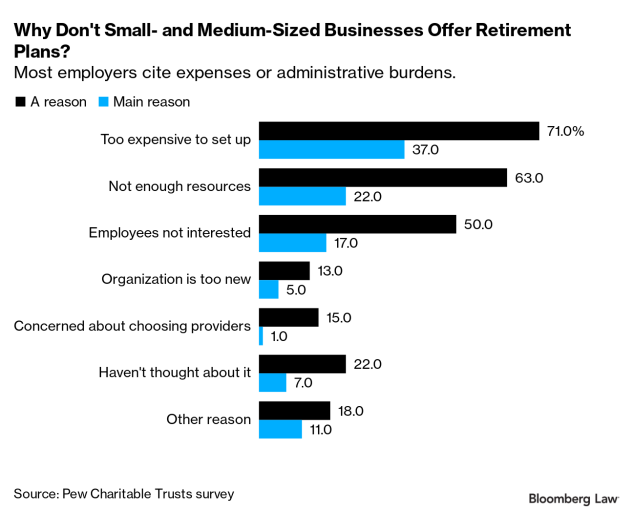 House Democrats’ retirement proposal would require businesses more than 2 years-old that employ five or more workers to set up savings plans that automatically enroll participants and escalate their contributions. Tax credits for employers would help them cover the cost of starting a plan and refundable tax credits for their workers would act as a match on yearly contributions.

That would mean a monumental change for millions of businesses, said Lubow. Companies would have to individually contract with businesses that specialize in holding and investing employee assets—a windfall for the financial services industry.

“I think you’re going to see a huge influx of cash in the investment arena,” she said.

As much as $7 trillion could be added to total retirement assets under management in just 10 years, the single biggest jump in savings ever recorded, according to the Federal Reserve Board.

Low-cost 401(k) and IRA providers could be best positioned to take in those new savers, said Paul Richman, chief government and political affairs officer at the Insured Retirement Institute. Pooled plan arrangements that group employers under joint plans are a low-cost solution Congress put in place to meet a rise in demand such as Democrats’ proposal would produce.

“We are absolutely in a position to fill this gap,” said Edward Gottfried, a product management director at Betterment, a digital financial advising and cash management company that specializes in low-cost workplace savings plans. “We’re in a far different position than we were just five or 10 years ago when 401(k)s were for deep-pocketed employers. Technology has allowed us to democratize access to retirement savings.”

Employers who fail to set up retirement savings plans under the Democrats’ proposal would face a steep $10 daily tax per employee. Those who opt in would have to pay for retirement services at scale, which don’t come cheap, said Chantel Sheaks of the U.S. Chamber of Commerce.

Small businesses would be left covering a benefit employees already can access on their own.

Setting up a plan can involve new payroll costs, because it’s a new pre-tax deduction. It can mean fees for attorneys and financial advisers; for recordkeeping and third-party administrator support costs; and for investment management or advice.

Since costs tend to decrease at scale, small businesses offering the cheapest, baseline benefit tend to pay a higher net cost, according to the Government Accountability Office.

“The current legislation doesn’t solve for the problem,” said Sheaks, the Chamber’s vice president of retirement policy. “Retirement plans are too costly and too complicated for employers. And instead of simplifying retirement, this legislation would make it more complicated.”

Pooled plans have been in place for less than a year, so there’s no guarantee that they will serve the purpose Democrats are betting they will, she added, and tax credits have so far done little to change the savings trajectory.

Caught in the crossfire of the debate are workers, many of whom stand to gain a lot if they begin saving for retirement for the first time.

Similar auto-enrollment and auto-escalation provisions that Ways and Means approved in May would deduct 3% of workers’ pre-tax pay, but Democrats’ budget plan would start at double that and increase over time to 10% or even as much as 15% of monthly income.

Lubow said she is concerned that starting first-time savers out at such a high contribution rate may scare them into opting out at the beginning, when it’s most important to illustrate the importance of regular savings.

“If a worker can’t afford at 6%, they’re just going to opt out, rather than making the proactive decision to contribute at a lower rate,” she said. “I think this is something you have to ease workers into.”

But beyond the starting amount, Democrats’ retirement proposal relies on an assumption that most workers don’t save because they choose not to, but other factors are certainly at play, she added. What everyone will be watching is whether moving the needle at the employer level would be enough to kick-start savings among those who need it most.