Dead, delayed, renegotiated -- at least $87 billion worth of deals have been thrown into chaos this year in the midst of the world’s economic and pandemic upheaval.

The unprecedented disruption in mergers and acquisitions has swept across a myriad of industries, from travel, retail, real estate and energy to even seemingly sheltered sectors such as finance and technology. In dollar terms, dealmaking has slumped by more than 70% in the U.S. and some 55% globally compared with a year ago, according to compiled by Bloomberg.

The weak M&A environment -- the $199 billion in deals in April, May and June was the lowest since at least 1998 -- underscores how corporate executives have retreated to the sidelines in the face of the drastic change in economic outlook. The only positive sign is that deals started to creep up in June, albeit from a weak prior month. 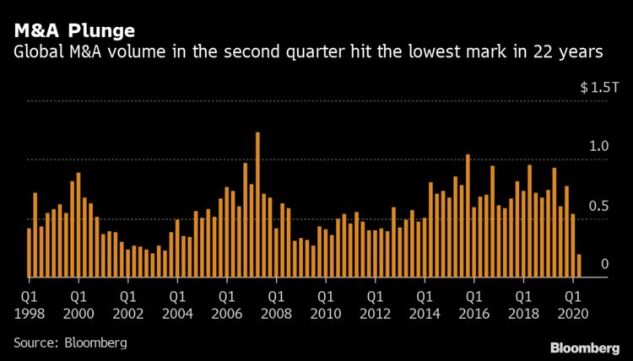 “This is a major seismic shock,” said , global co-head of M&A at Citigroup Inc. “It feels like there’s more disruption this time than I recall in the financial crisis 12 years ago.”

Here’s a look at the various ways deal-making has come to a halt.

More than 10 agreed deals worth about $20 billion have been terminated by mutual consent by buyer and seller. and ’s $6.4 billion merger was the biggest announced deal to be called off. The transaction would have created one of the world’s largest aerospace and defense suppliers.

The latest significant addition to the list is , which last week its $2.65 billion deal to buy the subprime credit card lender CardWorks Inc., citing “unprecedented economic and market conditions resulting from the Covid-19 global pandemic.”

Another dead deal in the financial services area: Texas Capital Bancshares and agreed to their $3.1 billion merger in May. The lenders’ boards pointed to the “significant impact of the Covid-19 pandemic on global markets and on the companies’ ability to fully realize the benefits they expected to achieve through the merger.”

At least 15 deals worth more than $20 billion are in dispute as buyers and sellers argue over the future of their transaction.

The latest is mall landlord , which wants to abandon its $3.6 billion deal for rival The pair announced a merger in February, a few weeks before the coronavirus shut down much of the U.S. economy, forcing stores to close as shoppers stayed home under lockdown orders.

Simon this month said it wants to the tie-up because Taubman breached the merger agreement by not taking steps to mitigate the damage from the pandemic. Taubman is holding firm, accusing Simon of “a classic case of buyer’s remorse.”

And in May, co-founder sued the company’s biggest investor, SoftBank Group Corp., for its decision to a $3 billion investment in the workplace provider. The investment was part of a rescue package agreed after WeWork’s initial public offering was shelved last year.

A handful of deals are in dispute but haven’t yet reached litigation stage. Britain’s is from its C$2.15 billion ($1.6 billion) purchase of Canada’s , saying the target breached the terms of their merger agreement and was unwilling to correct the situation. Cineplex has threatened litigation.

It’s a similar situation for and , which had agreed on a $4.2 billion tie-up in January last year. In April, Boeing said it would abandon the deal, weeks after Chief Executive Officer Dave Calhoun warned that the company would need to adjust to a “new reality” as travel demand evaporates. Embraer has said it would seek damages.

More than $6 billion worth of deals have been renegotiated this year, with engineering services company BorgWarner Inc.’s $3.3 billion transaction for the biggest. BorgWarner in March said that Delphi’s decision to tap out its credit line without permission breached their agreement. The companies in May agreed to for their deal, with shareholders of automotive parts maker Delphi taking a small cut to the ownership ratio initially proposed. The deal was approved by shareholders last week.

After a campaign that lasted more than six months, decided to its $35 billion hostile bid for , the COVID-19 pandemic made the macroeconomic and market outlook too uncertain.

This is just one of a number of transactions dealmakers say have been put -- some less publicly -- by companies waiting for the world to ride out the health crisis. They are for the second half of the year, predicting at least some of those deals will come back as the economy recovers.

One bright spot: a small recovery in M&A activity in June, compared with declines in both April and May. Volumes globally climbed 87% to $93.3 billion as of June 26, the worst June since 2002.

To contact the reporter on this story:
in New York at nahmed54@bloomberg.net