Beef shipments to the U.S. from the proud South American ranching nation jumped to 1,290 metric tons in April, the latest U.S. Department of Agriculture data show. A year ago, U.S. importers bought a measly two tons.

April is the same month that outbreaks of Covid-19 among U.S. meatpacking workers triggered a wave of shutdowns that tightened local supply and sent prices rocketing. 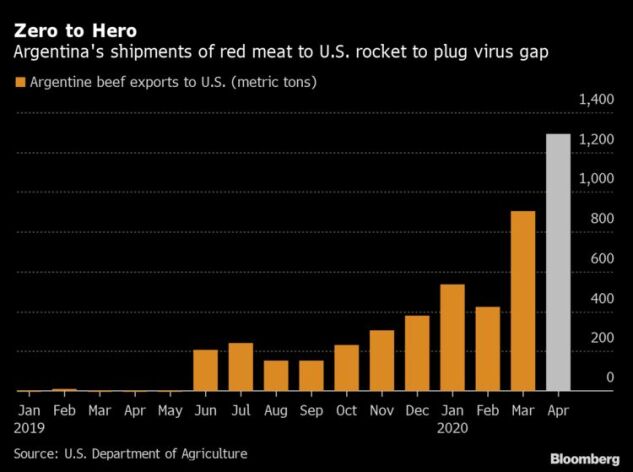 To be sure, Argentine beef exports had already begun to under President , who left office in December. Macri negotiated access to the U.S. market, which to Argentina in late 2018, ending a ban that began in 2001 after an outbreak of foot-and-mouth disease.

Shipments started flowing in the second half of 2019, but they surged in April amid the American processing logjam. While U.S. plants have reopened, they are yet to return to full capacity. Argentina accounts for just 1% of total U.S. imports.

“Argentina was able to take advantage of the supply shortfall,” Schiariti said. “This could be an opportunity to plant a flag.”

Even under President , who prefers intervention over Macri’s free-market approach, the nation’s beef export boom seems set to continue.

Some anecdotal evidence lies in the arrival this week of almost a hundred rabbis from Israel to certify Argentine plants as kosher, Infobae. Exports of Argentine beef climbed 18% in the first four months to 162,000 tons. China is the biggest buyer.

Neighboring Uruguay also benefited from shortages in the U.S., said Marcelo Secco, head of meatpacker group . Shipments that cleared customs in April were 3,760 tons, the most since July 2019, according to the USDA.

While Brazilian shipments to the U.S. doubled in May, the volume was still small at 277 tons compared with a record 83,942 tons shipped to China, according to Economy Ministry data. Still, exports to the U.S. may keep growing given Brazilian fresh meat only recently regained access after safety concerns dating back to 2017.

To contact the reporters on this story:
in Buenos Aires at jgilbert63@bloomberg.net;
in Montevideo at kparks8@bloomberg.net