Covid-19 cases continued to climb in a number of U.S. states over the weekend, threatening recent efforts to relax restrictions and revive businesses after months of lockdowns.

Texas and Florida, two of the most populous U.S. states, reported record numbers of new Covid-19 infections on Sunday. The recent surge in illnesses in those states and others, including Arizona and North Carolina, has led to concern among public-health officials that reopening the economy has come at the cost of spreading the new coronavirus. 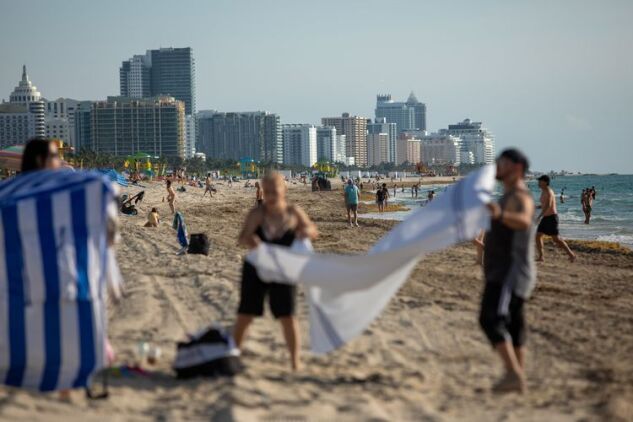 People walk along the beach in Miami Beach on June 10.
Photographer: Jayme Gershen/Bloomberg

Rising infection rates could jeopardize early efforts to revitalize the economy after a period of lockdowns, which were adopted in most states to stem the virus’s spread but also crushed businesses large and small and sent unemployment soaring. The U.S. has nearly 2.1 million confirmed Covid-19 infections and more than 115,000 deaths, according to data compiled by Johns Hopkins University.

While it’s difficult to determine the precise cause driving the latest virus numbers, one thing is clear: Americans are moving around and interacting more than they did before. That’s likely at least in part a result of reopening policies, as well as weariness with staying home, and it poses a real threat to public health. Because the virus transmits person-to-person, experts warn that more close and in-person interactions could allow the disease to spread more easily.

“We can’t always predict where the virus is going to spread, so the local ability to test and trace, and the local willingness to respond to outbreaks, are critical,” John Williams, chief of the Division of Pediatric Infectious Diseases at UPMC Children’s Hospital of Pittsburgh, said in an email last week. “The greatest concern is that locations will have a delayed response to increasing cases.”

State authorities are also bracing to see whether three weeks of demonstrations across the country against police violence following the death in Minneapolis of George Floyd could cause spikes in cases. It can take weeks for an individual to develop symptoms and then seek testing or medical care, so experts say it’s still unclear what the effect of those protests on the virus’s spread will be.

, director of the National Economic Council, downplayed the spikes in an interview on Fox News on Monday, calling them “relatively small .”

Increases may be due to individuals not taking basic precautions like social distancing and mask-wearing, Jeffrey Morris, director of the division of biostatistics at University of Pennsylvania’s Perelman School of Medicine, said Monday.

“The key is figuring out what is going on at places with upticks and figure out how to deal with it,” Morris said in an email. That may point to a path forward for the U.S. that promotes health while causing less economic damage.

In New York, once the epicenter of the U.S. virus outbreak, Governor residents that restrictions could be reinstated if businesses and people don’t follow recommended precautions. New York City, the last region in the state to begin reopening, allowed some businesses like construction to resume last week.

The prospect of a renewed wave of sickness interrupting the reopening of the economy has begun to darken the mood on Wall Street, where stocks opened down on Monday. On Thursday, as more states began to report rising rates of illness, the Dow Jones Industrial Average tumbled nearly 7%. It was down 0.5% at 12:21 p.m. The benchmark S&P 500 Index dropped as much as 2.5% Monday before paring its drop to 0.3%.

Virus data reported over the weekend are likely to continue to cast a pall. Total U.S. cases rose on Saturday and on Sunday, at or slightly above the average daily increase of 1.1% over the past week, but confirmed illnesses rose at higher rates in states like Texas, Florida and North Carolina. On Monday, Florida reported a 2.3% rise in new cases.

New cases are ticking up in more than 20 states, according to a Johns Hopkins virus tracker measuring the three-day moving average in each state, though the trend is particularly pronounced in fewer than 10 states.

(Updates with chart of states with increasing numbers)