For every job Kelly Hardwick has posted since March, there seem to be fewer and fewer applicants.

“That has been real surprising to me,” said Mississippi’s top government-hiring manager. “Generally what happens is that the number of applications go up as unemployment rises.”

The phenomenon is occurring across America. Neogov -- which runs governmentjobs.com, the largest government hiring website in the country -- said April applications plunged 54%, to 339,240 in the first part of the month compared with 735,756 a year earlier, even though the number of jobs available fell only about 13%.

The data so befuddled Neogov Chief Executive Officer that he commissioned a study. At a time of , he couldn’t understand why people weren’t seeking work.

After surveying about 8,000 people with profiles on the website, Evangelist said the best answer he could come up with was: is changing the calculus.

“It looks just like people aren’t coming; they’ve stopped searching for jobs,” he said. “And what they’re saying is that they don’t believe jobs are available.” 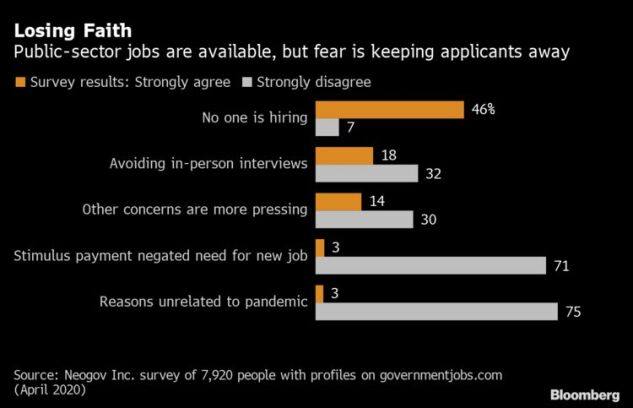 The out-of-work are so troubled by headlines about the and looming state-budget deficits, they’ve stopped going after openings that do exist. Almost 95% of people Neogov surveyed said they are looking for a new job, and about half said their employment status changed because of the coronavirus. But 40% said they’d recently slowed down or stopped their search, with most citing the fact that organizations aren’t hiring.

That’s worrying government managers, because it’s not true. Their average employee tends to be older than average private-sector workers, according to Evangelist. He said there’s a “silver tsunami,” with older people retiring faster than new workers can fill their spots. So even though budget cutbacks have affected some roles, states and cities still are hiring.

Hardwick’s counterpart in Nebraska, , has been struggling, too. The number of job seekers there has been falling for weeks, and he had to ask the labor department to advertise openings to people filing for unemployment benefits. That’s a first for the state as far as he knows.

Nebraska and Mississippi are emphasizing that public positions are relatively secure from economic downturns. Neither has had any layoffs related to the economic effect of the coronavirus.

Hardwick said he’s especially having problems filling positions in corrections and direct care; he suspects applicants are worried they’ll get the Covid-19 disease in these jobs. Jackson said he hasn’t had as much difficulty with roles at prisons, but that’s partly because some people are told directly about available government roles in Nebraska when they seek unemployment benefits. The state received 80 applicants through that method the first week it was used, he said.

The second most-popular reason respondents in the Neogov survey curbed a job search was fear of in-person interviews. About 18% strongly agree they don’t want to participate in a face-to-face process. Another 14% said they couldn’t apply now because they had more pressing concerns. Fewer than 3% said the security of receiving the stimulus check had made a difference.

There’s some reason to believe applications will rebound when social-distancing measures are relaxed. More than 40% of those surveyed said they’d start applying again when the strictest rules are lifted. And once they do, job seekers may have new priorities. Typically, Neogov data show salary is the No. 1 concern, according to Evangelist. That’s now been replaced by “stability.”

To contact the reporter on this story:
in Los Angeles at kgilblom@bloomberg.net