A new round of Covid relief was a bridge too far for lawmakers this week. Even the expiration of supplemental unemployment payments couldn’t prompt compromise, and there’s little telling the prospects for next week. The paralysis continued as virus outbreaks surged around the country and the economy’s second-quarter contraction broke records.

Catch up on the ways the coronavirus outbreak continues to change the world.

We’ve taken down our paywall to give you access to all of our tax and law coronavirus coverage.

The Senate recessed on Thursday for the weekend, ending chances for Congress to compromise this week on a coronavirus-relief measure somewhere between the Republicans’ new $1 trillion package and the House’s $3 trillion bill (H.R. 6800) passed in May.

The notion that Congress would pull at least one rabbit out of its hat at the very last moment—at least passing an extension of the $600 a week supplemental unemployment benefit, which expired Friday—didn’t pan out this time.

Treasury Secretary Steven Mnuchin said leaders would keep talking this weekend toward a deal. If the Senate were to approve one next week, House members (who will be out next week) could be called back quickly to vote on it. As of Friday, however, a compromise hadn’t emerged.

A number of Republicans are proposing unemployment supplement plans with less than the $600 weekly amounts. Democratic leadership so far is rejecting stand-alone unemployment measures, insisting instead on a comprehensive relief package.

The week started with Republicans finally introducing the Senate bills, eight of them, that constitute their economic aid package. Among the major provisions is a second round of economic impact checks, the payments of up to $1,200 per person disbursed directly by the IRS. The House bill contains a second round, too, but adds more money for dependents.

Thus it appears that, assuming lawmakers settle on an aid package at some point, the IRS will be sending out more payments, even as millions of intended recipients haven’t yet received their first payments, authorized by the CARES Act (Public Law 116-136) in May. People most in need are often not on the IRS’s radar screen, and they may be unaware of their eligibility or any mechanism to seek the funds. And the IRS’s phone-help system has frustrated callers. (The agency’s Taxpayer Advocate Service will be able to help with some of these problems soon, chief Erin M. Collins said.)

Once the biggest conflicts are overcome—among them a liability shield for businesses that Republicans want and aid for state and local governments that Democrats want—it shouldn’t be difficult to win bipartisan support for a good number of business provisions, including an expanded employee retention tax credit, which offers businesses an advance credit on payroll tax contributions. Both House and Senate packages expand the credit, albeit in different ways.

There is a possibility lawmakers would also agree to let businesses deduct expenses like rent and utilities even if these payments are covered by Paycheck Protection Program loans. The IRS said in May that such a “double tax benefit” wouldn’t be allowed, since PPP loans that qualify for loan forgiveness aren’t considered taxable income. Whether the Trump administration would agree to the deduction provision isn’t known.

Country by Country: More than 100 groups see the pandemic as a reason to push U.S. legislation (S. 1609) requiring large multinationals to disclose country-by-country financial information, including taxes. “Increasing tax transparency through public disclosure will force large corporations to clean up the most questionable tax practices—boosting revenues to combat the economic and health ramifications of the virus,” the groups wrote to Senate Banking Committee leaders.

The pandemic’s blows to jobs and income have spurred more states to expand their earned-income tax credit, one of the tools that have proven powerful at the federal level in relieving the burden of poverty.

California and Colorado lately broadened their EITCs to taxpaying non-citizens. Iowa, New Jersey, and Virginia modified their credit programs this year, appropriating funds to boost EITC participation through outreach, education, and tax preparation assistance. Other states are taking EITC-related steps, too. A New York budget provision, for example, allows eligible taxpayers to get the credit even if they haven’t applied. 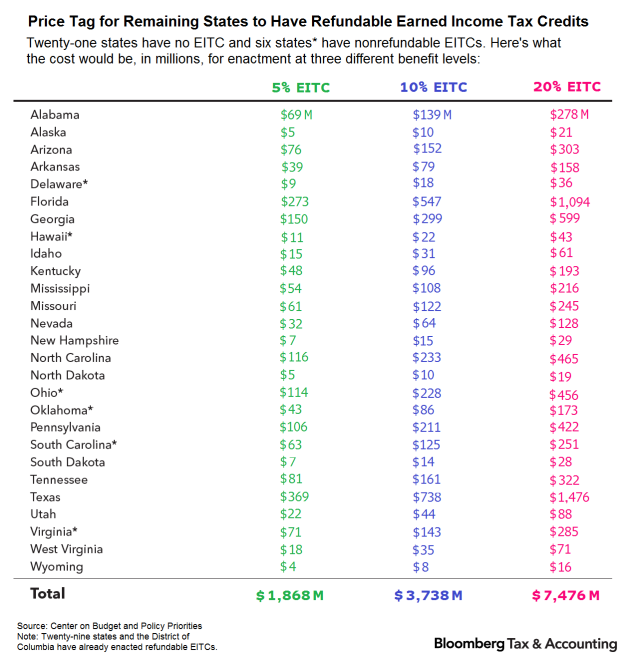 Heading South: It appears that the New York-to-Florida migration has been spurred further by Covid-19. The virus is surging in the Sunshine State, but still it feels to some city dwellers like a better place to be stuck, if one must be stuck, than a Big Apple apartment. The supply of available properties is dwindling as wealthy New Yorkers shift to the lower-tax locale.

Bloomberg Tax has a state-by-state roadmap logging all virus-related developments as they happen.

U.K.: The virus’ monster hit to retailers has prompted Chancellor of the Exchequer Rishi Sunak to consider online sales taxes to offset cuts in business-rate taxes that are based on the rental value of premises. Officials will examine options in an October report from a Parliament committee, which included a 2% tax on physical goods sold online. The Treasury said it will look at replacing the business-rate tax with one based on the capital value of land and premises, and levying it on the owner instead of the occupying business.

European Union: The 27-nation bloc allowed member countries to continue until Oct. 31 a suspension of value-added tax, as well as import duties, on medical equipment used for fighting the coronavirus. It was due to end July 31.

Israel: The Knesset’s Finance Committee approved a Finance Ministry proposal to cut taxes on residential real estate purchases for buyers who already own homes. The taxes were raised in a 2015 temporary measure that was to expire.

Ecuador: President Lenin Moreno issued a decree to collect income tax early from big companies—2019 sales of at least $5 million—whose first-half 2020 was profitable. “Those who have the most, help the most,” he said in a tweet. Proceeds will go to help smaller companies in the crisis. Industries including airlines, hospitality, agriculture, exports, and fisheries are exempt, though. Payments will be due by Oct. 14.

More international news and information on coronavirus is here.

To contact the reporter on this story: in Washington at klarsen@bloombergtax.com