School mask mandates are at the center of a case before the Arizona Supreme Court that could change how lawmakers craft the state budget.
Photographer: Ina Fassbender/AFP via Getty Images

Politicians won’t have the last word on masks in U.S. public schools. Judges will.

A split among states on school mask mandates and by some districts to comply with restrictions is putting the onus on courts to set the landscape for coronavirus safety in the education space.

With the highly contagious Delta variant sending more children to hospitals, a dozen states now require K-12 students to wear masks, while another handful bar such mandates. Litigation is underway in at least five states, with judges in Texas and Arkansas having temporarily blocked bans on school mask requirements.

The diverging policy approaches and mounting legal challenges are shining a spotlight on the limitations of the U.S. political system and how it’s contributed to an already chaotic atmosphere. Classes are beginning. Covid-19 cases are spiking. Kids under 12 can’t be vaccinated. States are going their own way, just as they did last year in the early stages of the pandemic.

Even as President has blasted mask mandate bans, high-profile Republican governors including Florida’s and in Texas are digging in to enforce them, stoking fear and anger among parents.

“These kinds of fissures have never really been seen,” said , executive director of Georgetown Law’s Project on State and Local Government Policy and Law. “We’re in a period of unprecedented polarization. We’re in a period when there’s a distrust of expertise and a distrust of science that’s largely been based on disinformation.”

Because many of the disputes over school masking involve collisions between state and local policymakers, experts see no room for a federal judge to step in and order a nationwide injunction as a quick fix. Instead, varying and potentially conflicting rulings are sure to arise, eventually to be sorted out by state supreme courts. 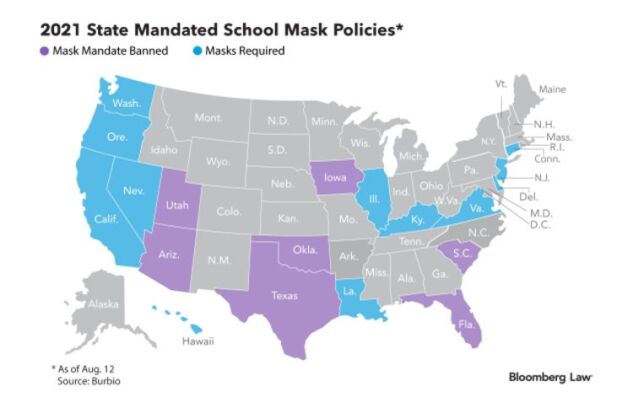 The issue doesn’t stop at masks. States are also split on vaccine mandates at work and in higher education, businesses’ ability to require proof of inoculation, and other Covid policies.

“There won’t be one ruling to settle all expectations, there will be a patchwork of rulings and policies,” said Greg Goelzhauser, a political science professor at Utah State University.

The Centers for Disease Control and Prevention says about half the country has yet to be fully vaccinated. As of Aug. 6, the 7-day average of daily new coronavirus cases was almost 90,000, a 33.7% increase from the week before.

The Biden administration has few tools at its disposal to broadly regulate pandemic safety because the U.S. system known as federalism gives states primary power over public health and safety, legal scholars say.

“Federalism is an agreement to disagree,” said John Kincaid, a professor who directs Lafayette College’s Meyner Center for the Study of State and Local Government. “As much as people might disagree, federalism is designed to accommodate that diversity.” 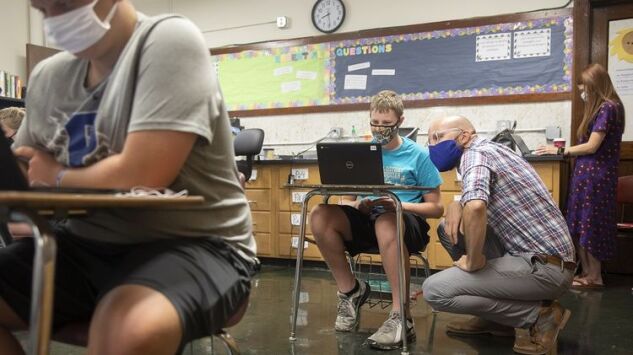 It’s not the same as France, where President in July imposed a strict rule barring access to public places without proof of vaccination or a negative test. About a million people signed up to get vaccinated by the next day, though Macron continues to fight accusations about authoritarian over-reach.

In some states where fights over school masking have broken out, both sides claim to have science on their side.

The CDC recommends masking in schools to prevent the spread of the coronavirus. But in his July 30 executive order, Florida’s governor cited unspecified studies that he said “have shown children are at a low risk of contracting a serious illness due to Covid-19 and do not play a significant role in the spread of the virus.”

“When the CDC says this is the best thing for people’s health and a governor overrules it, trying to figure out where a school comes down in that case, it becomes very politicized,” said Myra McGovern, vice president of media at the National Association of Independent Schools, which represents K-12 schools in the U.S. that are privately run.

The Biden administration has used what authority it has to set a national strategy, mandating vaccines for federal workers and requiring masks on public transportation. But to create uniformity on masking in schools, the administration would have to threaten to take away federal education funding unless states complied with its chosen approach, scholars say.

The administration is unlikely to take that step, however, given the potential for political blowback and court challenges.

As the courts continue to sort out the issue, schools should use CDC guidance as a baseline for safety, listen to state and local recommendations, consult with experts, and be ready for change, said Kathryn Beaumont Murphy, counsel at Saul Ewing Arnstein & Lehr LLP in Philadelphia and co-chair of the firm’s K-12 Schools group.

“As it relates to masks, what I’m telling schools is to be very open with their communities and say this is really fluid and you’re taking everything into consideration,” she said.