A health-care worker prepares a dose of the Pfizer-BioNTech vaccine at a vaccination site in Lake Worth, Fla., in August.
Photographer: Saul Martinez/Bloomberg via Getty Images

Ben Penn: As the Biden administration moves closer to unveiling its vaccine mandate for the private sector, there’s mounting anxiety in corporate America and a greater likelihood of industry lawsuits seeking to thwart the Labor Department’s regulation.

Many in the business community were supportive—or at least not publicly hostile—when President directed the Occupational Safety and Health Administration last month to begin an emergency rulemaking to require workforce vaccinations or weekly testing at companies with at least 100 employees.

Six weeks later, alarm over the supply-chain crisis and fears of losing vaccine-resistant workers have employer groups striking a different tone, according to interviews with eight lobbyists and attorneys.

Big Law workplace safety attorneys are now gearing up to file legal challenges on behalf of business clients, we’re told, and several prominent trade associations are considering serving as a plaintiff—which would provide anonymity for member companies that finance the action.

The National Federation of Independent Business is emerging as the most likely industry group to join the horde of GOP state attorneys general and conservative interest groups that are likely to sue to block the emergency temporary standard.

Elizabeth Milito, who manages litigation at NFIB’s Small Business Legal Center, said the group doesn’t think OSHA can satisfy the “grave danger” threshold the agency is bound by law to meet to justify an emergency rule.

She declined to say if her organization will sue, citing the need to review the rule’s text and assess its impact on members, many of which have more than 100 employees. 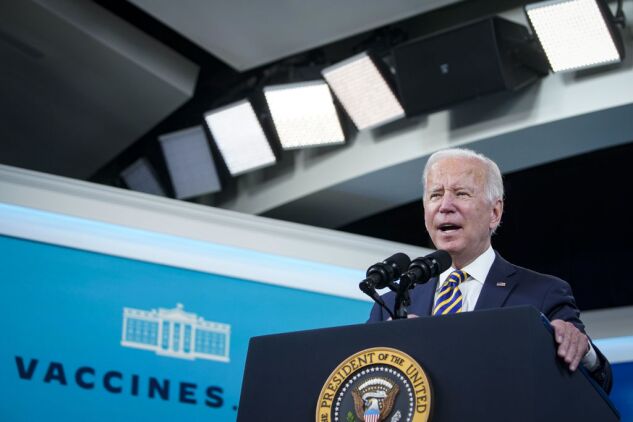 President Joe Biden discussed next steps in the U.S. vaccination campaign during a press event in the Eisenhower Executive Office Building on Oct. 14.
Photographer: Al Drago/Bloomberg via Getty Images

A wave of litigation was expected from the moment Biden announced the coming mandate, but business groups joining the fray would present an increased threat to the administration—even though some of the most powerful industry lobbying organizations, such as the U.S. Chamber of Commerce, are likely to sit it out.

There are several reasons why. For starters, if the White House hemorrhages industry partners, it could hamper Biden’s overall goal of encouraging Americans to get vaccinated.

On the legal front, trade associations have a decided edge over other interested parties in litigating regulations. Many have a record of winning court decisions that strike down Democratic administration rules, and they have deep pockets to pay the elite management attorneys whose practices are devoted to attacking executive branch actions.

NFIB’s legal arm also has a unique advantage compared with other industry players in Washington. Unlike other litigation centers, the Small Business Legal Center is structured as a 501(c)(3), meaning it can accept donations from private citizens, not just member companies.

That means if NFIB sues, anyone who opposes Biden’s mandate could provide financial backing.

Multiple attorneys with experience suing the federal government said that a prominent firm would charge at least $250,000 to $300,000 to initiate legal action over the OSHA rule, and the final tab could approach seven figures.

The agency began enforcing its health-care emergency standard in July, before the administration shifted its pandemic strategy to counter the delta variant. OSHA had cited seven employers through Oct. 15, the most recent date for which citations were available.

The agency has up to six months after an inspection to issue a citation, so it’s too early to know how frequently inspectors are finding suspected violations of the standard.

But we’re beginning to see which issues are likely to trigger citations, including clinics not having a Covid-19 prevention program in place and workers incorrectly wearing N95 respirators.

Proposed fines have been as high as $10,728 for a serious violation. No willful violations, which allow for steeper monetary penalties, were cited as of Oct. 15.

The health-care standard is different than the framework Biden directed OSHA to consider for the private-sector rulemaking. Its core mandate is for employers to implement a plan to thwart transmission of the virus in the workplace.

Specific requirements include screening patients and anyone else before they enter a work site; providing respirators for workers when they will be exposed to people with suspected or confirmed infections; ensuring six feet of separation between people when indoors; and upgrading ventilation systems when feasible.

The standard exempts fully vaccinated workers from masking, distancing, and barrier requirements when there’s no reasonable expectation a person with suspected or confirmed Covid-19 will be present. 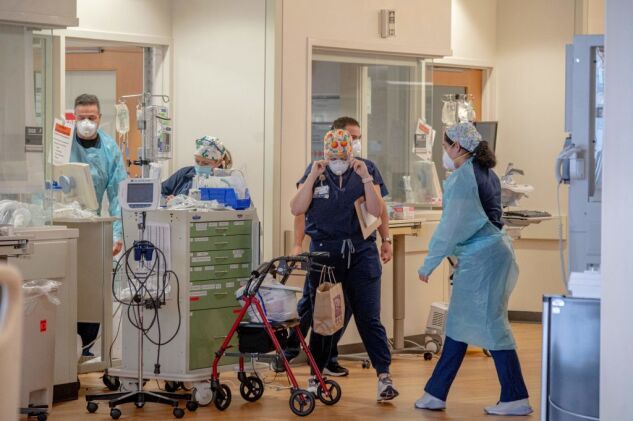 In one example of enforcement action, an inspector observed unvaccinated nurses and other medical staff at a residential care center working at a nursing station within five feet of each other for 15 minutes. That triggered citations for not conducting a hazard assessment to detect potential problems at the nursing station, and for not ensuring workers stayed at least six feet apart when separation was feasible.

In an inspection of a different employer, OSHA determined a nursing home didn’t know which of its employees were vaccinated, thereby making the business ineligible for exemptions to social distancing and barrier requirements.

In yet another example, an inspector noticed several workers wearing a face mask underneath an N95 respirator. The mask prevented the N95 respirator from tightly sealing on a worker’s face. That led to a citation for not adequately training workers on how to use N95 respirators, which offer more protection than a mask.

Some violations were less obvious. One inspection found that a nursing home was using less protective air filters in its air-conditioning system. OSHA specifies that employers use, when compatible with the system, air filters rated MERV 13 or higher, which are effective enough to capture the coronavirus.