A man holds his six-week-old son for the first time on May 14, 2020, while the boy's mother looks on, in Stamford, Conn. On April 1, the woman, then almost 8 months pregnant, was hospitalized with Covid-19. Staff at Stamford Hospital intubated her and performed an emergency C-section to save the child.
Photographer: John Moore/Getty Images

When nurse practitioner Taylor learned she was pregnant in February, the coronavirus seemed to pose little threat in her western Texas town. But by summer, with Covid-19 cases spiking nationwide, Taylor’s managers asked her to move to a clinic that had become a pandemic hot spot.

“There were tough decisions that needed to be made,” Taylor said. “I was walking on eggshells, and left in a very vulnerable position.”

Taylor, who asked Bloomberg Law to use a pseudonym to protect her from retaliation, was nervous about the assignment and asked to treat patients remotely, using existing telehealth options. Her request was denied.

Seven months into a high-risk pregnancy because of a vascular condition, and with colleagues at the new clinic contracting Covid-19 daily, Taylor took on the dangerous new assignment. She felt she had little choice: Quitting—and losing health insurance with a baby on the way—wasn’t an option, she said.

The pandemic has exacerbated such challenges faced by pregnant workers across the country, including those in health care, retail, and classrooms. The women seek workarounds to stay safe, including extra breaks, additional protective equipment, or assignments that would limit their exposure. When those requests are denied, some are going to court.

Public health officials say pregnant women are at high risk if they contract the virus, but federal law makes it difficult to protect pregnancy as a disability on its own, attorneys and advocates say. And while a House-passed measure this year would clarify the rights of pregnant workers, the Senate has failed to act.

Dozens of workers have filed suit around the country since the onset of the pandemic, claiming they were not accommodated or were illegally fired during their pregnancies for complaining about work conditions—or that businesses used the pandemic as a pretext to fire them because they were pregnant. Because of stronger statutes in states, most of the suits have been filed in state courts.

Bloomberg Law reviewed more than 30 cases filed in state courts, as well as several filed in federal court, including by women in Florida, California, New York, and Alabama. The jobs involved ranged from retail and health care to factory and office work.

“As the virus continues to go on, and more employees and businesses are impacted, I expect that we will see Covid litigation in all areas increase and claims by pregnant employees,” said Melissa Camire, a Fisher Phillips partner in New York, who advises companies.

It’s not clear under federal law what an employer must provide when a pregnant worker asks for an accommodation because of coronavirus, attorneys say.

The Americans with Disabilities Act protects expecting mothers if they have a disability that stems from pregnancy. Title VII of the 1964 Civil Rights Act requires that a pregnant worker show they are treated differently than a similarly situated non-pregnant coworker if denied an accommodation, which can be a difficult standard to prove, attorneys say.

In contrast, more than half of the states now require private employers to provide accommodations to pregnant workers. Tennessee was the latest state to pass a stronger law to help fill federal gaps. New Hampshire and Iowa are also poised to enact accommodation laws. 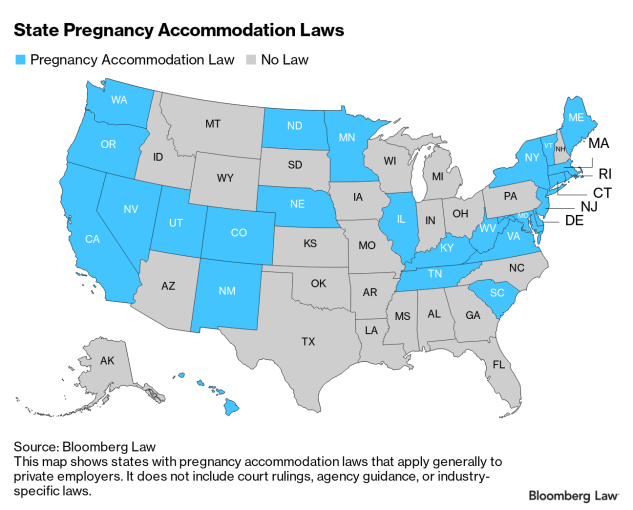 The need for accommodations are starkest for low-wage workers, single mothers, and women of color, who generally have less access to paid leave and other job safety nets, advocates say. Women also make up a large percentage of essential workers, including grocery store cashiers, nurses, and home care workers.

Overall, data show mothers are paid 71 cents on the dollar compared to fathers—and the gap is even larger for mothers of color.

“Women are left with an impossible choice when they don’t have clarity or rights: Lose your paycheck or keep health insurance,” said Sarah Brafman, senior policy counsel with A Better Balance, an advocacy group for families. “Go back into a difficult economic climate without a job or risking your health on the job.”

Taylor, the Texas nurse practitioner, called attorneys and complained to her managers of discrimination. But ultimately she had little choice but to work in the clinic until she delivered her baby, eating lunch in her car to limit the time she was around other people.

Taylor’s family relied on her employer-based health insurance because her husband is self-employed in the construction industry. She couldn’t risk a gap in coverage at any point with very steep hospital bills looming, she said.

Taylor made it through her pregnancy and delivered her son in September, without contracting Covid-19.

Similar stories stemmed from the legal actions filed by other pregnant workers during the pandemic, according to a Bloomberg Law review of cases filed in federal and state courts from March to December. They include:

The U.S. Supreme Court in its 2015 Young v. United Parcel Service decision left open some questions about the rights of pregnant workers. More than two-thirds of courts since the ruling have held employers were not obligated to accommodate pregnant workers under the Pregnancy Discrimination Act, which amended Title VII, according to a Better Balance report from 2019.

The House passed the Pregnant Workers Fairness Act earlier this year, meant to resolve legal ambiguities created by the Young ruling. But the Senate didn’t introduce its own version, and because it wasn’t passed through both bodies, a new version would have to be reintroduced next year.

President-elect has said the bill would be part of his agenda for gender equality. The bill’s sponsor, Rep. Jerry Nadler (D-N.Y.), confirmed he will refile the bill next year.

During debate, House Democrats argued that Covid-19 and the elevated risk for pregnant women point to the need for the new protections. They argued the Supreme Court set “an unreasonably high standard” for pregnant workers to demand accommodations.

The bill passed with bipartisan support and had backing of the U.S. Chamber of Commerce. Major businesses, including , , , , , and are among the large companies that supported the bill.

“I litigate under the current framework and it’s possible for employers to accommodate pregnant workers,” said Kalpana Kotagal, partner at Cohen Milstein Sellers & Toll, who currently represents women in federal lawsuits. “But still, some courts have had a hard time interpreting or understanding what it means.”

“During the pandemic, there is a heightened need to accommodate pregnant workers,” Kotagal said. “That’s a really important part of the puzzle.”

(Updated to add confirmation from Rep. Nadler that the Pregnant Workers Fairness Act will be reintroduced in Congress next year.)