Children ages 12 to 15 years old can safely take the Covid-19 vaccine made by and , U.S. health officials said, opening an important new phase of the U.S. immunization effort.

The ’s Advisory Committee on Immunization Practices voted 14 to 0, with one recusal, on Wednesday to support the two-dose vaccine’s emergency authorization after it was cleared by the on Monday. CDC Director adopted the recommendation after the vote, according to a statement from the agency.

The vaccine could be deployed to teens as soon as Thursday in a move that’s long been anticipated as paving the way for the mass vaccination of middle and high-school students before the next school year begins.

“I’m very excited to have this vaccine approved for this age group,” said Camille Nelson Kotton, a panelist and infectious disease doctor at , following the vote. “This is a really important issue for this summer, and also a very good way to provide better community immunity.”

The vaccine has been in the U.S. for those 16 and older since mid-December. Other shots made by and are only currently available to those 18 and older.

In comments at the White House, President encouraged families to get their teenagers vaccinated now that they are eligible. He said more than 15,000 pharmacies in the U.S. will be able to vaccinate this age group and doses also will be available in the offices of pediatricians and family doctors.

“The bottom line is this: A vaccine for kids between the ages of 12 and 15 is safe, effective, easy, fast and free,” he said. “So my hope is parents will take advantage of the vaccine and get their kids vaccinated.”

He also said that if teens are “on the move this summer, they can get their first shot in one place and their second shot in another.”

Acting FDA Commissioner said in a Monday briefing that pharmacies and other distribution centers can now “extend down to the younger age group” since the clearance is for the same dose and formulation being administered to those 16 and up. Pediatricians, though, will need to make arrangements to deploy the shot given its ultra-cold storage requirements, she said. 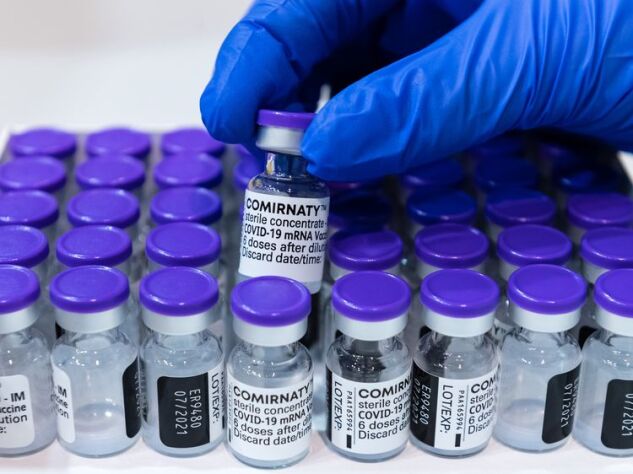 Vials of the Pfizer/BioNTech vaccine.

New York-based Pfizer and Germany’s BioNTech said in March that their two-shot vaccine was 100% effective in the 12-to-15 age group in a final-stage trial. The shot produced antibodies exceeding the level seen in vaccinated young adults, and didn’t result in any new or worrisome side effects.

Nearly 60% of Americans have received at least one dose of a vaccine, according to . But the nationwide campaign to get everyone to take the shot has begun to slow. The U.S. is giving an average of 2.2 million shots a day as of Tuesday, down from 3.37 million about three weeks ago.

Now, the next leg of the campaign is poised to begin. There are almost 17 million adolescents ages 12 to 15 in the U.S., according to the Kaiser Family Foundation, or 5.3% of the U.S. population.

“Socializing is a critically important part of a child’s development,” said , a trained pediatrician who is Pfizer’s senior vice president of vaccine clinical research and development. “Just as the vaccine has proven liberating to adults, I fully expect the CDC to liberate adolescents.”

At the same time, Covid-19 caused more adolescents to be hospitalized than the 2009 H1N1 pandemic, according to Sara Oliver of the ACIP Covid-19 Vaccines Work Group, and the virus is estimated to have been a top-ten cause of death among the age group in 2020 based on fatality data from the previous year.

“There’s a misperception that kids aren’t impacted at all by Covid,” said Lee Beers, president of the , in an interview. “Thankfully, death in children has been a rare event, but we’re seeing kids who have long-haul symptoms, and some with cardiac symptoms after being infected.”

During the ACIP meeting, the CDC suggested a multipronged approach to vaccine implementation designed to improve access and equity. Those at the forefront of vaccination campaigns should use existing provider networks, they said, including mass vaccination sites and public health facilities while tapping both pediatric providers and family doctors.

Previously, the CDC has said people should wait two weeks between getting a Covid-19 shot and other immunizations based on an “abundance of caution,” rather than any specific negative outcome. On Wednesday, that recommendation changed, drawing some debate.

The CDC’s Kate Woodworth said Covid-19 vaccines can be co-administered with other shots, an adjustment that could help boost adolescent immunization rates that have fallen during the pandemic. When non-Covid vaccines are given at the same time as other shots, extensive data has shown they work just as well and have similar adverse effects as when they’re administered individually, Woodworth said.

However, it’s unknown whether people will react more strongly when Covid shots are combined with other vaccines. And some panelists said the policy shouldn’t be changed without seeing data specific to the Covid vaccines, particularly since the Pfizer shot and the vaccine made by Moderna Inc. use new technology.

The CDC responded by saying providers could consider whether the patient is behind or at risk of becoming behind on recommended vaccines, as well as the reaction profile of the vaccines.

The trials in the 12-to-15 age group were designed to focus on evaluating the immune response generated by the vaccine, rather than overarching efficacy, which is determined by comparing the number of Covid-19 cases accrued in the vaccine arm of the study to those seen in the placebo arm.

Pfizer’s large, final stage study of those 16 and older included more than 40,000 participants. The adolescent trial of 12-to-15 year olds, in comparison, included 2,260 participants. That’s in part because the trial was powered to simply assess the immune response generated by the vaccine, rather than how effective it was in preventing symptomatic Covid-19. Many infected children also do not show symptoms of Covid.

However, Pfizer began recruiting the younger adolescents in the late fall, even before it secured efficacy results from those 16 and older. That early enrollment work meant the drugmaker was actually able to evaluate the shot in teens over the holiday season, when new cases of the virus were surging in the U.S., Gruber said in an interview.

No deaths were reported among any of the teen and pre-teen trial participants, and side effects were similar to those noted with adults. The most common were pain at the injection site, fatigue and headache, most of which resolved within a few days.

Pediatric researchers are investigating whether Covid is now that variants are causing localized flare-ups. The rate of cases in young kids and early teens began surpassing that of those 65 and older in early April, and hospitalizations among children aren’t falling as quickly as for those 18 and older.

The CDC is also investigating a rare but serious condition associated with Covid called multisystem inflammatory syndrome, or MIS-C. More than 3,000 cases had been identified by April 1, and the agency will soon update its tally.

“Pediatricians are in an ideal position to be talking to parents about the vaccine,” Beers said, noting she expects pediatricians and family doctors to soon take on a bigger roll in the distribution process. “Vaccine delivery is a really important part of what we do. We have lots of experience answering parents questions.”

Since 12-to-15 year olds will be given the same vaccine as adults, the regimen will be priced the same. In the U.S., the Pfizer-BioNTech vaccine costs $39 for a full course. Currently, the shots are paid for by the U.S. government, with no out-of-pocket cost for vaccine recipients.

Meanwhile, Moderna has said that initial results from its trial of its Covid vaccine in adolescents ages 12-to-17 showed that it was 96% effective, with no serious safety problems identified so far. The company is still collecting data and is in discussions with regulators about amending its emergency use authorization to include teenagers.