Vice President disregarded a Mayo Clinic policy requiring face masks as he discussed the coronavirus outbreak with top doctors at one of the nation’s leading hospitals on Tuesday.

The Centers for Disease Control and Prevention has recommended wearing face coverings in public, and Pence has repeatedly implored Americans to follow public health guidance. But he was conspicuously the only participant in a round-table discussion at the hospital on Wednesday who didn’t wear a mask.

After photographs of Pence talking with masked health workers circulated on Twitter, the Rochester, Minnesota-based hospital tweeted: “The Mayo Clinic had informed @VP of the masking policy prior to his arrival today.” 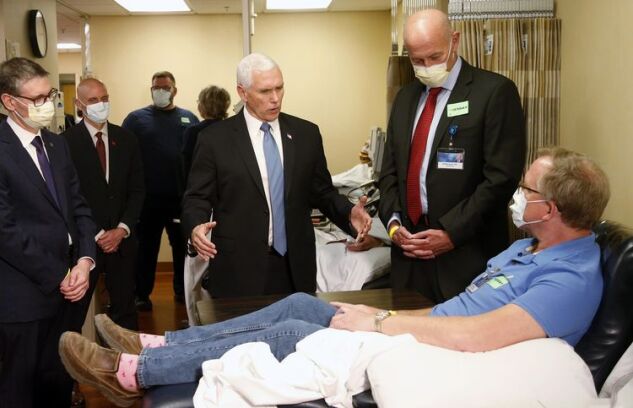 Mike Pence, center, speaks during a tour of the Mayo Clinic in Rochester, Minnesota on April 28.
Photographer: Jim Mone/AP Photo

Pence, when asked at the end of the visit about his decision not to wear a mask, told reporters he doesn’t present a danger to others because he is tested on a regular basis, as is everyone who comes into contact with him.

“Since I don’t have the coronavirus, I thought it’d be a good opportunity for me to be here, to be able to speak to these researchers, these incredible health care personnel, and look them in the eye and say thank you,” Pence said.

As Pence toured the hospital before the discussion, the only people not seen wearing masks were the vice president and some of his staff. Other participants, including Minnesota Governor and Food and Drug Administration Commissioner , were all masked.

, Pence’s chief of staff, followed his boss’s lead early in the day, but was later seen complying with Mayo’s policy.

Pence chairs the White House’s coronavirus task force and is regularly tested for the disease. He plays a prominent role in White House news conferences and frequently encourages Americans to follow guidelines from medical professionals about how to slow the spread of coronavirus.

There have been nearly 1 million cases of covid-19 in the U.S. and more than 57,000 deaths, the largest outbreak in the world.

The Centers for Disease Control and Prevention has recommended people wear face masks in public areas. And at the White House briefings, top medical advisers have explained that wearing a face mask isn’t intended to protect the person who wears it, but the people around them.

But Pence’s boss has likewise declined to set an example for Americans looking for guidance from their leaders on how to curb the outbreak. President has said he doesn’t intend to wear a mask.

The White House has defended the decision by Trump and other senior administration officials to forgo masks by noting that they are tested regularly for coronavirus infection. Members of the vice president’s entourage in Minnesota -- including reporters who accompanied him aboard Air Force Two -- were tested for infection before the trip.

(Updates with Pence comments in fifth and sixth paragraphs.)