A server wearing a facemask takes orders from a table of customers at Eight Row Flint in Houston, Texas, on May 22, 2020, amid the novel coronavirus pandemic.
Photographer: Mark Felix AFP via Getty Images

The is tearing through the U.S. heartland, setting records for hospitalizations and forcing businesses to rethink their plans to reopen as new modeling predicts the virus will kill 180,000 Americans by October.

With the U.S. seeing one of its highest-ever increases in cases Wednesday, some states took drastic measures, imposing face mask orders and internal quarantines. The country recorded more than 34,500 new infections for a second day, rattling markets as numbers neared the peak of 36,188 set April 24, when the virus was coursing through New York.

The resurgence, coming just as the regions first hit by the pandemic start to emerge, reflects the pathogen’s inexorable spread in states that were slow to enforce lockdowns or quick to lift them. It also made clear to places where the disease was late to arrive that there are no magical escapes.

Florida and Texas each hit records for cases Wednesday, with health officials in Houston saying their infrastructure was “overwhelmed.” Arizona, meanwhile, reached a peak in hospitalizations. In California, which also saw an all-time high for new infections, Walt Disney Co. delayed the reopening of its indefinitely, while Nevada’s governor ordered everyone to wear masks in public as some of Las Vegas’ biggest casinos made them a .

New York, New Jersey and Connecticut set quarantines for incoming travelers from the hot zones, and North Carolina put its reopening on ice for three weeks. 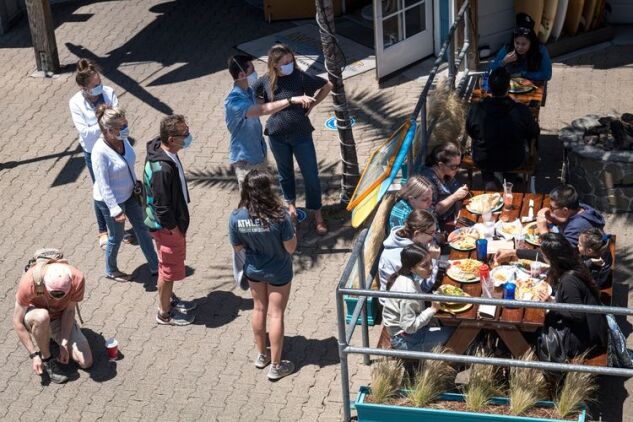 People wearing protective masks wait to be seated at a restaurant on Pier 39 in San Francisco, California, on June 22.
Photographer: David Paul Morris/Bloomberg

Financial markets took note. The S&P 500 2.6%, led lower by energy and airline stocks, while Treasuries climbed. Stocks were down again about 0.2% at the start of trading Thursday, while the 10-year Treasury climbed. And the broader economy remained in a malaise: The number of Americans seeking unemployment benefits was for a second-straight week.

Thomas Giordano, chief of infectious diseases at Baylor College of Medicine in Texas, compared the outbreak to a wildfire that started in the northern corners of the U.S. and slowly spread south.

“As people started emerging and businesses started opening, it was like oxygen for those embers and it’s stoked the fire,” he said. “It’s been burning in Texas and other places in the South without any changes in policy. I do worry that this is going to run wild.”

The fresh estimate of deaths comes from the University of Washington’s Institute for Health Metrics and Evaluation, and is actually about 10% lower than a previous model. But after months of lockdown without a unified national strategy, more than 121,000 Americans have already died. The Trump administration has largely left policy-making to the states, which have followed strategies ranging from tight lockdowns in the Northeast to relative laissez-faire in the South and West.

In California, which was early to enact statewide shelter-in-place rules in March, Governor urged residents to recommit to slowing the pandemic. Newsom, who last week issued an order requiring face masks in public, too many people were letting down their guard against the virus, which has killed more than 5,600 people in the state. California has seen record numbers of confirmed infections and hospitalizations this week, as more businesses open and social justice demonstrations continue.

“We cannot continue to do what we have done over the last number of weeks,” Newsom said at a media conference Wednesday, after the state reported more than 7,100 new cases. “Many of us, understandably, developed a little cabin fever. Some, I would argue, have developed a little amnesia.”

Disney had originally planned to reopen its parks in Anaheim in July, but had to walk those plans because it didn’t think it could get state approvals, or agreements with worker unions in time. 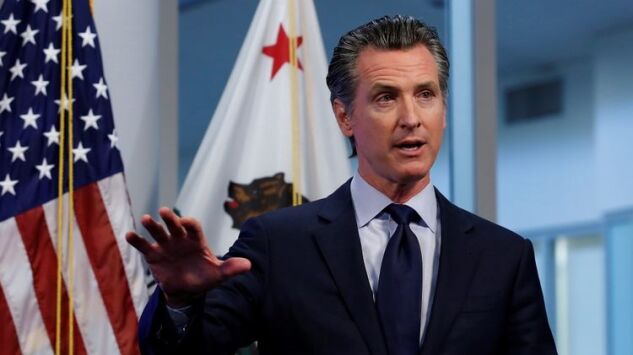 Watch: California Governor Gavin Newsom urges residents to recommit themselves to slowing the spread of the coronavirus as cases climb by record numbers.
(Source: APTN/Bloomberg)

In Florida, leaders rushed to pass mask mandates and crack down on the bars and nightclubs where the pandemic is spreading, including a threat to pull liquor licenses in Orlando. 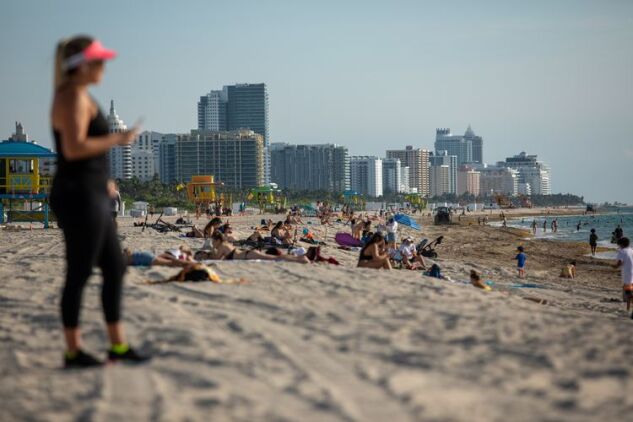 Demand for intensive-care beds there jumped 10% in one day. At the Texas Medical Center, a cluster of hospital systems that together operate the world’s biggest medical complex, the number of intensive-care cases surged to 1,298 in a system with a normal operating capacity of 1,330.

The complex could be out of intensive-care capacity as soon as Thursday, and exhaust its backup capacity in another 10 days, it said.

The fresh surge raised the specter of new shortages of ventilators and gear. In Colorado, “hospitals have increased their capacity by upwards of 20%,” Governor said at a news conference. “If we hit much higher levels, we don’t currently have the supplies in place to handle that. We would enter another kind of crisis.”

The spike in cases comes as states across the U.S. have either already lifted or are easing lockdown orders, many at the behest of President Donald Trump. Some should reconsider, said Ali Mokdad, professor of health metrics sciences at the University of Washington.

Mokdad said states with surging cases should consider requiring masks and closing certain businesses. He said the pre-emptive closures could be for a set period to give businesses more certainty than the previous shutdown.

“I can’t see a possibility of any of the states with the increases you are seeing right now not dialing back,” Mokdad said. “From a public-health standpoint, shutting down faster, you can open faster and earlier and your economy will open faster and much better.”

Indeed, North Carolina Governor on Wednesday halted that state’s reopening after new daily cases hit 1,721, up from 848 the day before. He ordered that masks be worn in public and said the state would delay further decisions for three weeks. “Our increasing numbers show we need to hit the pause button while we work to stabilize our trends,” Cooper said.

The state was among those whose residents were targeted by quarantine orders in the Northeast, which was struck early and has largely quelled its outbreak. The governors of New York, New Jersey and Connecticut said travelers from nine Southern and Western states where more than 10% of tests for Covid-19 were coming back positive would have to seal themselves off for 14 days. New York is threatening thousands of dollars in fines for noncompliance. 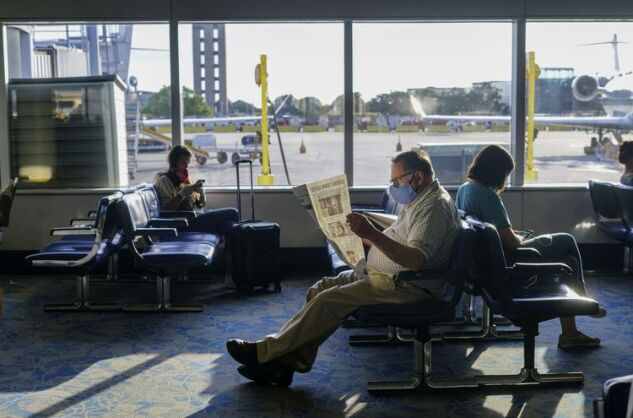 A traveler wearing a protective mask reads a newspaper while sitting at a gate at the Charlotte Douglas International Airport in Charlotte, North Carolina, on June 4.
Photographer: Sandy Huffaker/Bloomberg

In a mark of how the Covid landscape has changed, the list includes Florida and Texas, which both imposed similar restrictions on travelers from the Northeast in March. “We did a full 180 degrees,” Cuomo said.

The other states on the list are North and South Carolina, Arizona, Arkansas, Utah and Alabama, where Governor once scoffed at Covid-19 lockdowns: “Y’all, we’re not Louisiana, we’re not New York state,” she said on March 27.

Nevada’s face-mask order came two days after the state saw a single-day record for cases -- most in the county where Las Vegas is located. Caesars Entertainment Corp. had already said earlier on Wednesday that masks would be required at all of its properties nationwide, while MGM Resorts International said in a statement that it will require masks for all guests and visitors inside public spaces at its U.S. resorts starting Friday.

“Guests who do not wish to comply will be asked to leave the property,” the company said. “Masks have proven to be one of the best ways to curtail the spread.”

America is on track to lose 180,000 lives to coronavirus by the start of October, roughly equivalent to the population of Providence, Rhode Island, according to the University of Washington experts, though they said an embrace of masks would mitigate the damage.

The forecast is predicated on the expectation that the outbreak will pick up in late August and intensify further in September. If more than 95% of Americans start regularly wearing masks in public, that number would drop to 146,047 deaths.

In Houston, Mayor promised a redoubled effort. He said police and fire departments will step up monitoring of taverns and clubs to ensure compliance with occupancy limits and mask requirements.

“We want to create a board of shame for those who are violating the rules,” he said.