Hospitals and medical offices are once again running short on masks and gowns in the midst of a raging pandemic, but the federal government is still drawing up plans to distribute its swelling stockpile.

Federal officials have 44 million N95 masks in warehouses and more than a half billion on order, according to the U.S. Department of Health and Human Services. They’ve also purchased at least 4.6 billion gloves, 6.7 million goggles and 4.8 million face shields. While officials decide how to distribute the supplies, hospitals and nursing homes are again scrounging gear, struggling with soaring prices and dealing with .

The stockpile is part of a plan announced by President in May to build up a 90-day supply of personal protective equipment for future surges of Covid-19. By fall, federal agencies aim to have 300 million N95 respirators on hand, more than 10 times the number available before the virus struck this year.

Trump unveiled the plan when the pandemic appeared to be receding in New York, New Jersey and other states that suffered most during its first wave. Since then, however, cases have exploded elsewhere, with massive outbreaks in California, Florida and Texas. Hospitals and nursing homes once again find themselves rationing and reusing masks and gowns, a practice that can endanger doctors, nurses and patients alike.

“It’s like we’re in the middle of a hurricane here. They should not be stockpiling PPE,” said Bob Gibson, vice president of the 1199 SEIU United Healthcare Workers East, the largest such union in Florida. “It should be given to the frontline health workers. They have been in this fight for five months now, and they are exhausted. At a minimum, the federal government, the state and employers should be giving them the equipment they need.”

The official in charge of the federal cache said in a Friday interview that a plan to distribute the goods will be forthcoming.

“I have no intention of allowing a federal warehouse to fill up with supplies when I can see there are a few nursing homes or hospitals that may not have as many supplies as others,” said Navy Rear Admiral . He said the administration would change supply contracts to free some materiel. 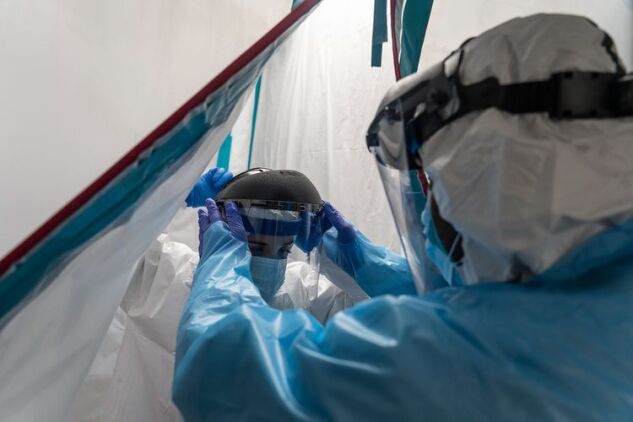 Medical workers prepare to go into the Covid-19 ICU at a hospital in Houston, Texas, on July 28.
Photographer: Go Nakamura/Getty Images

Shortages appear less desperate than this spring, when some California nurses held signs along the street asking neighbors to donate masks and gloves. The sudden emergence of the virus in China, where much of the world’s personal protective equipment is made, caught the U.S. health-care industry without a backup supply.

States are once again competing.

“We actually have a team of procurement specialists that just comb the globe for opportunities for the state to purchase PPE supplies,” Jill Hunsaker Ryan, executive director of the Colorado Department of Public Health and Environment, said on Friday. “Part of what is driving this is some of the other states just have such a large case count right now.”

About 87% of hospital nurses had to reuse at least one type of single-use PPE, according to a National Nurses United survey of about 21,000 nurses in July.

“PPE is not being provided in the quantity or quality that is required,” Ernest Grant, president of the American Nurses Association, told the U.S. Senate Finance Committee on Thursday. 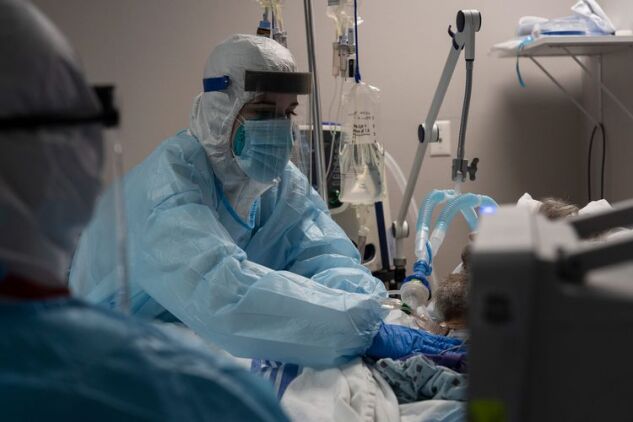 Medical workers treat a patient in the Covid-19 intensive care unit at a hospital in Houston, Texas on July 28.
Photographer: Go Nakamura/Getty Images

In Florida, nurses are being told to wear N95 masks for a week or more, which compromises the integrity of their seals, said Betsy Marville, a registered nurse who is an organizer with 1199 SEIU United Healthcare Workers East. “We’re in a surge and we’re going back to extended use,” she said.

The union represents about 25,000 workers in about 75 Florida nursing homes and 30 hospitals. Almost all are being asked to cut corners on PPE, Marville said. In the past, Marville said, that would have warranted discipline or mandatory infection-control training.

In nursing homes, workers often bring their own masks because the operator either doesn’t have enough or is hoarding them, she said. Supplies that used to be readily available are now kept under lock and key.

In Southern California, nurses at Riverside Community Hospital went on strike in June due to staffing and PPE shortages.

Erik Andrews, a rapid response nurse there, said the hospital issues him one N95 mask a day, “and you have to practically sign your life away. It’s recorded that it’s been dispensed to me.”

The Strategic National Stockpile was created in the wake of the 2001 anthrax attacks to hold supplies needed in the event of bioterrorism, but it has evolved to respond to pandemics as well. Following Trump’s announcement, the U.S. Defense Logistics Agency purchased $594 million in personal protective equipment for the stockpile, spokesman Patrick Mackin said in a statement in early July.

The U.S. Department of Health and Human Services also bought about 600 million N95 respirators in March from Honeywell, 3M, O&M Halyard, Draeger and Moldex that will be delivered over 18 months, according to a statement. O&M Halyard will supply an additional 68 million N95 respirators and surgical masks at a cost of $29.4 million. Honeywell’s award was increased by $20.29 million and Molex’s was increased by $21.4 million, according to the contracts.

Polowczyk said Friday that he’s working on changing deals with N95 manufacturers like Honeywell and O&M Halyard under the Defense Production Act to allow them to delay filling the order “until maybe the end of September.” Instead, those tens of millions of masks would be directed to the commercial market in August and September, where hospitals and nursing homes could buy them, he said.

The federal government would direct where those masks go, based on data hospitals and nursing homes are submitting to the Department of Health and Human Services about supplies on hand, Polowczyk said.

Neither Texas nor Florida have large unfulfilled requests into the federal government, Polowczyk said. Texas asked for 100,000 gloves, and Florida asked for some N95 respirators and surgical gowns. The deliveries will be in the coming weeks, he said.

Many front-line workers say they need the supplies immediately.

GetUsPPE, a non-profit organization, is an online platform that connects suppliers or donors with providers. Demand has soared as the virus spread in hot spot states: Requests from Texas rose 237% from May to June. In Florida, the increase was 240% and in Arizona, 176% for the same period.

Megan Ranney, an emergency-room physician at Brown University in Rhode Island, helped found the organization in March after hearing so many complaints about the lack of PPE. It’s still in too-short supply, she said.

“They should have a stockpile, and they are right to purchase for that,” she said. “However, there are facilities across the U.S. that actually need it right now.”