The Trump administration has doled out roughly $881 billion from the major components of the pandemic relief package signed into law one month ago, and soon will have a half trillion dollars more to shovel into the economy.

The Treasury Department was put in charge of distributing, through multiple channels, nearly half of the $2.2 trillion Coronavirus Aid, Relief and Economic Security Act. While one key piece ran empty within two weeks -- aid to small businesses -- there’s still a lot of money left to work with.

On Friday, President plans to sign into law another $484 billion in rescue money, including replenishment of small business assistance, aid to hospitals and funding for virus testing. Here is a tally of what’s been spent or committed so far from the law’s key programs:

About 20% of the stimulus, or $454 billion, was given to Mnuchin to use as a backstop for Federal Reserve lending facilities. The central bank can leverage that into more than $4 trillion to help stabilize financial markets through loans aimed at companies and local governments.

So far, the Treasury has committed $215 billion from its Exchange Stabilization Fund to Fed facilities.

The central bank has said it will post about who is tapping its facilities on its website. 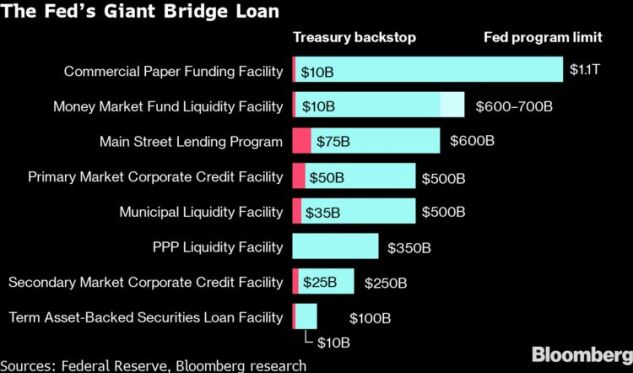 Nearly a dozen airlines have said they would in the payroll assistance program designed specifically for the industry, which comes in the form of grants and low-interest loans. So far, airlines have claimed $21.6 billion of the total $50 billion in aid available.

Payments are being handed out on a “,” according to the Treasury Department. Several airlines have announced that they may ask for more loans but have until the end of September to decide what they will actually take. 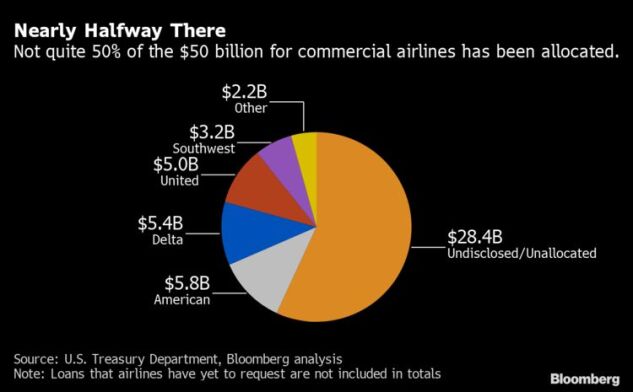 The Cares Act sets aside $17 billion for companies deemed critical to national security. So far, none of that money has gone out. The Treasury released for those funds late Thursday.

The most obvious contender for the funds is , which is away from asking for a piece of this portion of the rescue package.

Mnuchin has so far said this pot of money is for companies that are either major suppliers to the Defense department, or companies with top-secret clearance.

The Internal Revenue Service has sent out more than half of economic impact payments it plans to distribute to to help bolster family budgets as workers face job losses or see their hours cut.

The agency has sent up to $155.9 billion of the total $292 billion it plans to send, according to Treasury Department data released Thursday afternoon. 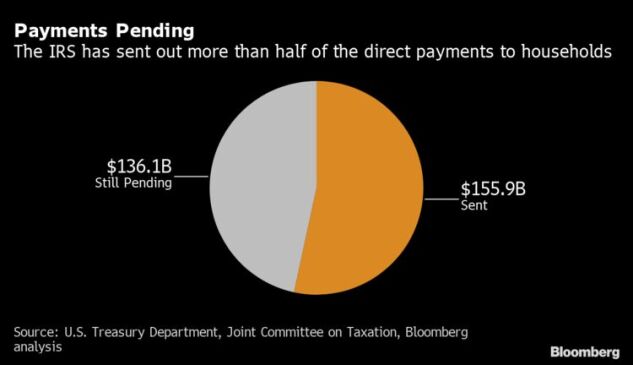 The Treasury has deployed more than $95.2 billion of the $150 billion for state, local and tribal governments.

Municipalities can also seek federal relief through the Fed’s Municipal Liquidity Facility, although the central bank has set . 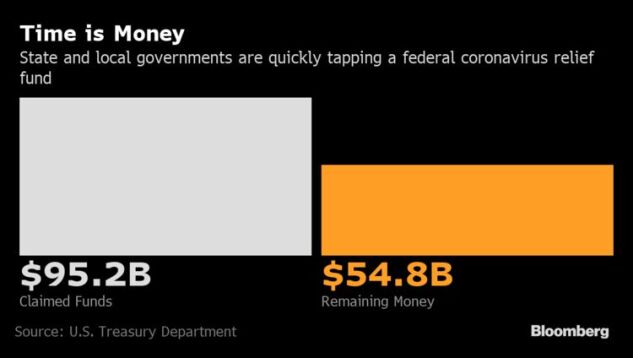 While the latest spending bill from Congress does not authorize any more money for state and local governments, House Speaker Wednesday that there would be a separate “major package” to address the needs of states and localities.

The initial $349 billion for Paycheck Protection Program loans intended for small businesses ran out less than after it was rolled out. The Small Business Administration approved about 1.6 million loans at an average size of $206,000.

Congress has approved another for the program, $10 billion of which is for fees and processing, bringing the total aid package to $670 billion. That latest bill also includes an additional $60 billion for a separate small business economic injury loan program, that Congress initially gave $17 billion.

More than $27.7 billion in unemployment benefits have been paid out so far in April. Congress estimates that expanded benefits package will total about $260 billion, however there isn’t a cap on the amount that the federal government will pay out. More than 26 million Americans have in the past five weeks.