Senate Majority Leader s opposition to Democrats’ calls for billions more in aid to cash-strapped cities and states isn’t stopping many of his Republican colleagues from lining up for a piece of the funding they fully expect to be in the next Covid-19 relief package.

In a series of recent virtual town halls, tweets, and private meetings, rank-and-file Republicans made clear they are ignoring the calls from the GOP leader from Kentucky to “push the pause button” on the aid. They’re now working closely with officials in their home states to make sure they will be in line to get a fair share of what could be hundreds of billions of dollars in the next recovery package.

“The skyrocketing unemployment rate and subsequent decline in tax revenue has left local gov’ts stretched to the limit,” Sen. (R-Ohio), a member of the Senate Finance Committee, tweeted on Wednesday. “As I told Ohio’s county commissioners on our call this morning, I’m working [with] my colleagues to secure additional and more flexible funding.”

McConnell said after the Senate passed a more than $480 billion interim package (H.R. 266) to shore up a small business loan program and boost hospital funding that he’d rather see states declare bankruptcy than give them money to cover lost revenue during the crisis.

The stance invited a tweet Thursday morning from Senate Minority Leader (D-N.Y.): “Republican senators: Raise your hand if you think your state should go bankrupt.” And House Speaker (D-Calif.) noted on Bloomberg TV on Wednesday that it puts McConnell at odds with President Donald Trump.

“The president himself has said, he has tweeted out, that was last night, that he is ready to do state and local,” Pelosi said. 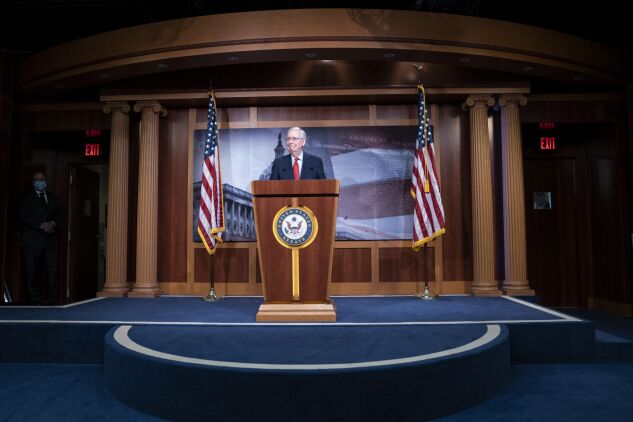 As the leader was delivering that message during a series of appearances on conservative media outlets, others in the GOP were encouraging state and local officials to carefully draw up documents detailing their losses in anticipation of reimbursement down the road.

As Portman was working with state officials, Sen. (R-N.C.) assured a mayor in his home state that talks already are underway in Washington and at the state level on the need to assess damage and determine what North Carolina wants in the next recovery bill.

“The state will be working with local governments much in the same way as you would document the impact of a hurricane,” Tillis said during a virtual town hall. “The local governments should go about the task right now.”

Portman and Tillis didn’t specify the size of any aid package. But Sen. (R-La.) separately has backed a plan to create a $500 billion fund to help state and local governments responding to the crisis. Cassidy said he will introduce the bill with Sen. (D-N.J.) when the Senate returns in May, as both Louisiana and New Jersey have become “hotspots” in the epidemic.

Senate aides said support is quietly building behind the scenes and more Republicans are expected to join Democrats and sign on to the legislation.

“It will bring relief to state and local govts, so they can respond to the public health and economic crisis while maintaining essential services,” Cassidy, who like Tillis is running for re-election this fall, said in a tweet.

McConnell, however, wields enormous power in deciding what measures are brought to the Senate floor so these senators will have to convince him to change his mind over such state and local aid during the next round of negotiations over virus relief money.

Schumer said on the floor Tuesday the next package “must be big, bold, and suited to the needs of a beleaguered country,” and on the scale of the $2.2 trillion Coronavirus Aid, Relief, and Economic Security (CARES) Act () signed by the president in March. That package had a $150 billion set-aside to help state and local governments.

Officials from the National Governors Association recently asked Congress to provide another $500 billion specifically for states to meet budgetary shortfalls. Govs. Larry Hogan (R) of Maryland and Andrew Cuomo (D) of New York, the NGA chairman and vice chairman respectively, said restrictions shouldn’t be placed on the funding that would ban its use for replacement of lost revenue.

The bill Menendez and Cassidy said they will formally introduce soon calls for that $500 billion for a State and Municipal Aid for Recovery and Transition fund. The bill would lower the current threshold for receiving aid from populations of 500,000 to include counties and towns with populations of 50,000 or greater. It also would increase flexibility for states and local government to use funds to plug revenue losses due to the epidemic and targets additional money towards coronavirus hot zones.

Tillis said that local governments in North Carolina should document the funding shortfalls to respond to the virus, but also “the lost revenue as a result of those closings. That’s work the cities, the counties, the towns needs to be doing now so that we can sort out at the federal level and the state level what we can do take the edge off.”

Portman said he’s already working closely with Sen. (D-Ohio), the ranking member on the Senate Banking, Housing, and Urban Affairs Committee, to get more money and flexibility for his state.

The lawmakers wrote to Treasury Secretary Steven Mnuchin on Tuesday asking him to help states determine how they can use existing relief funds as a “revenue replacement.” They said Ohio’s revenue collections are “highly likely to plummet” because of the crisis.

“We also ask that you work with us to ensure that new funding for state and local governments beyond the CARES Act is robust, dedicated, and flexible, allowing governments to provide critical services and address significant budget shortfalls associated with the coronavirus pandemic,” they wrote.