The White House’s coronavirus task force has all but vanished from public view as President pushes Americans to put the outbreak behind them and resume normal social and economic life.

The task force was for several weeks a staple of Trump’s response to the pandemic. From March 4 until late April, the panel held nearly daily, televised briefings at the White House, many headlined by Trump. Its medical experts fanned out across TV networks to share guidance on curbing the spread of the virus.

“I think we’ve done a great job,” he said at the time. 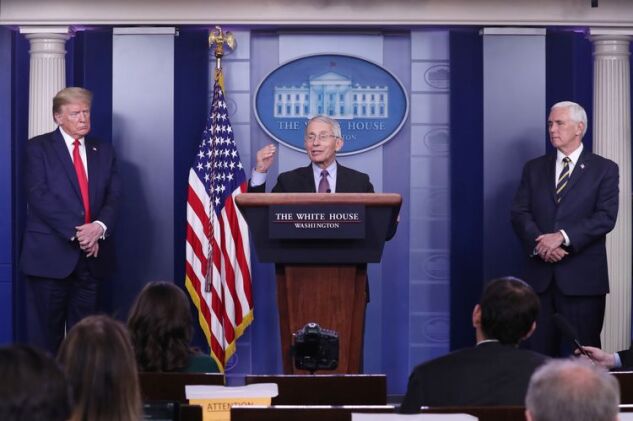 The task force is now reduced to weekly closed-door meetings with Vice President . , the top infectious disease expert in the government, hasn’t spoken publicly at the White House since April 29. In his last task force news conference, a week earlier, he cautioned that the country must “proceed in a very careful, measured way” to reopen.

While it hasn’t been formally mothballed, the task force’s move to the back burner comes as Trump publicly cheers states that are reopening their economies more quickly, and brushes aside a persistently high number of new infections and deaths every day. There were nearly 20,000 new cases of the disease and almost 1,000 deaths on Wednesday, for example, according to data compiled by Bloomberg. 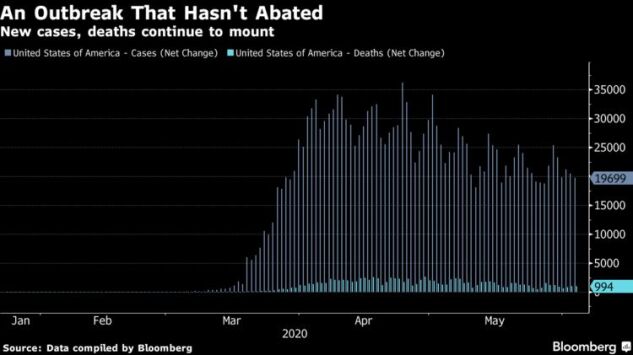 On Friday, Trump said at the White House that he expects the U.S. economy to recover from the coronavirus outbreak even faster than predicted after a surprise gain of millions of jobs. Both Trump and Pence framed the jobs data as a signal that the worst of the virus had passed.

“The strength and the resilience of the American people is shining through,” Pence said. “And this is their day. And congratulations America, the comeback begins.”

Pence and Trump made only passing mention of social distancing and other mitigation measures. The White House positioned reporters’ seating at close together for the first time in weeks, undoing precautionary separation.

Meanwhile, the Republican Party is racing to relocate Trump’s re-nomination convention after North Carolina’s governor, , insisted on reducing crowd sizes and other health precautions if it was held as planned in Charlotte in August.

“There’s almost a sense coming out of the White House that the pandemic is somehow over,” said , director of the Harvard Global Health Institute at Harvard University. “It’s like the third inning of a baseball game, and we’re down 8-2, and the manager concludes the game is over, says we’ve won, and walks out.”

Fauci told CNN this week that he hadn’t spoken with Trump in two weeks. On Friday, he told CNBC that the task force is continuing with a lower profile and fewer meetings.

“Even though numerically the number of meetings might be less, the activity is still really quite intense,” he told CNBC.

A spokeswoman said Fauci declined to comment for this story.

The task force coordinator, , joined the president for an event on reopening last week but doesn’t appear in public as frequently as she once did. White House Press Secretary periodically relays information to reporters that she attributes to Birx -- such as asserting in May that there was a correlation between states reopening and virus caseloads falling.

Even within the White House, employees have visibly reduced how frequently they wear masks during briefings. , the director of the U.S. Centers for Disease Control and Prevention, didn’t speak publicly during any White House event last month and warned lawmakers Thursday that the U.S. is still unprepared for pandemic threats.

Admiral , the assistant health secretary who served as the administration’s testing czar, said Monday that he’ll soon return to his regular job, where he leads a Trump initiative to end the U.S. HIV epidemic.

“I want to reaffirm that HIV remains a priority for me and my office. I expect to be demobilized from FEMA in mid-June and return full time to my former position and responsibilities -- including HIV,” he said.

He told reporters Wednesday on a conference call that he will still remain involved in the coronavirus testing strategy.

An HHS spokesperson, in a statement issued on condition of anonymity, said Giroir will continue to be engaged with coronavirus efforts, while his day-to-day testing duties will be assumed by the office of , Trump’s Health and Human Services Secretary. Giroir wasn’t formally a task force member but joined the briefings regularly.

The White House declined to comment, though one adviser signaled the task force would soon appear publicly again.

“I’d be surprised if there weren’t task force briefings soon,” White House counselor said Tuesday, downplaying questions about its shrinking profile. The administration is “really racing against the clock to keep these therapeutics and vaccines in development,” but has surged enough supplies to states and hospitals in case the outbreak spikes again, she said.

One Democratic governor, of Colorado, said his state’s hospitals are “doing well where we are today” but that he’s concerned about the outbreak resurging from large gatherings and increased socializing.

Trump has often lashed out at governors who criticize him.

“We would deeply appreciate better transparency into what we’re getting and when from the federal government,” Polis added.

“That remains elusive. We’re grateful when we received things. We frequently don’t know until a day or two before,” which he said has sometimes resulted in redundant orders.

The Federal Emergency Management Agency, which is essentially leading much of the response coordinated by the task force, said in a statement that the government and private sector had combined to procure over 90 million N-95 masks, about 150 million surgical masks, about 14 million face shields, about 37 million gowns and over one billion gloves.

As of this week, the government has about 19,800 ventilators in its stockpile, enough that Trump regularly boasts he’s sending surpluses of the machines to other countries, including Russia and Brazil. FEMA declined to say what quantities of other supplies are in stockpile.

There remain several core roles for the federal government to play, Harvard’s Jha said. Chief among them are testing and public guidance. He said he’s spoken with city and state officials who’ve said they don’t have enough information from the government about how to safely reopen and ward off a new wave of infections.

“The message is: You’re on your own -- kind of, Godspeed, and hope you figure it out, but the federal government’s not going to help you. And the little bit of guidance they did get came from the task force,” Jha said.

Pence held a call with governors on Wednesday, focused on the coronavirus response and testing efforts. “The briefing focused on protecting our most vulnerable Americans including nursing home residents and Americans with underlying health conditions, including those in African American, Hispanic, and Native American communities,” Pence’s office said in a statement afterward.

The HHS spokesperson hailed U.S. progress in testing, including the release of a report to Congress on May 24 that largely shifted the responsibility to states. Democrats panned that plan.

“This disappointing report confirms that President Trump’s national testing strategy is to deny the truth that there aren’t enough tests and supplies, reject responsibility and dump the burden onto the states,” House Speaker and other top Democrats said in a joint statement. “The Trump Administration again attempts to paint a rosy picture about testing while experts continue to warn the country is far short of what we need.”

The U.S. has exceeded 400,000 tests per day since May 28, and has performed more than 18 million overall, according to the Covid Tracking Project, which compiles data from states. Public health experts say a long delay in ramping up testing -- the U.S. didn’t exceed 100,000 total tests until March 19 -- contributed to the country experiencing the largest publicly reported outbreak in the world.

“I can’t believe that we as Americans are OK with that,” he said. “And we can’t have the White House task force not exist, we can’t have it not be engaged. I think there’s a lot of good they have done; obviously, I wish they had done more.”

To contact the reporter on this story:
in Washington at jwingrove4@bloomberg.net