Expanding the earned income and child tax credits, a long-time priority for Democrats could be in the mix of provisions for a future virus relief package.
Photographer: Brendan Smialowski/AFP via Getty Images

Democrats are pushing for more long-term financial relief for those most affected by the pandemic, after the government issued checks and expanded unemployment benefits in its initial response packages.

Those familiar with current deliberations say that even a rapid economic recovery from the pandemic will leave lasting aftershocks, especially for low-income individuals and those who have lost their jobs. Expanding the earned income tax credit (EITC) and the child tax credit could help the most vulnerable in the years to come, they say. Such a change could do more for the most vulnerable individuals than the $1,200 checks or the additional $600 per week for those receiving unemployment benefits.

The next pandemic relief bill could be the opening for Democrats to again make the case for tax credit expansions and also call for more cash, unemployment, and food assistance. House Speaker Nancy Pelosi (D-Calif.) and Senate Minority Leader Chuck Schumer (D-N.Y.) have said they want the next package to be “transformative and far reaching,” a sign that Democrats will push for generous provisions.

Republicans historically have had mixed reactions to the EITC, but the unprecedented nature of the pandemic is seen as a new opportunity to open up discussions again. A Republican aide in Congress said that the GOP is focused on helping people directly and keeping businesses afloat. That means cash assistance now, because changes to the EITC won’t help people until they file a 2020 tax return next year at the earliest.

The pandemic is hitting low-income individuals especially hard, and without a strengthening of the social safety net, they may not bounce back, said Dorian Warren, vice president of Community Change Action, a group that helps low income communities and advocates for policies that helps them.

“Some of the old political alignments are being ruptured in this moment. And in that sense, I’m actually optimistic that there could be some new alignments of unlikely suspects that forge common ground about the plight of low income people and workers in this crisis,” Warren said. 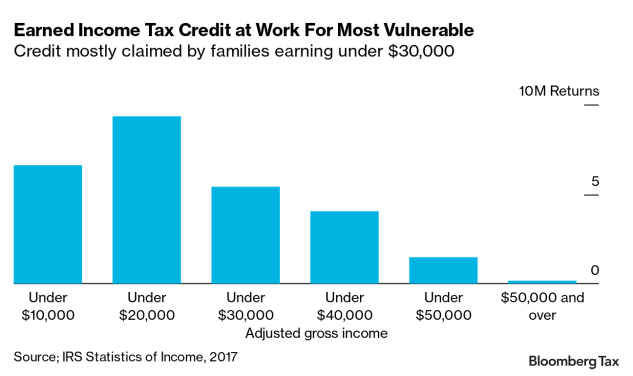 
Any expansion is likely to mirror the bill (H.R. 3300) that cleared the House Ways and Means Committee last year. That bill would lower the minimum age to claim the EITC to 19 from 25 for childless individuals, while raising the maximum childless credit to $1,464 from $529. The bill would also make the entire amount of the $2,000 child tax credit refundable. The changes apply to 2019 and 2020.

The package was shepherded through committee by Ways and Means Chairman Richard Neal (D-Mass.), who is a strong advocate of the tax credit programs. But efforts to attach the measure to a year-end funding bill in December were unsuccessful.

A top Democratic House aide said that Democrats see an expansion of these credits as an important backstop to complement direct cash assistance to taxpayers. The economy is fragile for low-income individuals and the tax code should be leveraged to strengthen the safety net for them, the aide said.

Democrats also want to expand the EITC to help childless couples, to make sure that the earned income that is calculated is based on 2019 income and is applied throughout the country, the aide said.

Elaine Maag, a principal research associate with the Urban Institute, said in a recent piece that targeted tax relief programs like the EITC work well during a recession.

“The EITC is not a perfect policy response to an economic slowdown. But by advancing or increasing payments under the EITC, Congress could use an existing program to target anti-recessionary tax benefits to low- and moderate-income workers, and get the most bang for the fiscal buck,” she said.

Maag said that any change in the EITC to include childless workers would mostly benefit people in the hospitality and retail industry. Changing the child tax credit so that families in very low income homes get the full credit would be another good policy move, she said.

Now that Congress has passed four relief measures without addressing the credits, calls for expansion are likely to grow. A group of progressive organizations panned the third virus relief law (Public Law 116-136) for benefiting restaurant owners but omitting “similar assistance for restaurant workers by failing to fix the EITC and CTC, which would have expanded the credits to millions of low-income individuals and families.”

Jobs for many of those in the restaurant and retail industries have disappeared as a result of the pandemic, and expanding these benefits would help those most affected.

Such changes won’t be easy.

“I can easily see a number of Republicans pushing back against expansion right now under Covid-19 by simply saying that this is not the time to expanding these types of programs,” said former Congressman Charles Boustany (R-La.).

The current round of changes to the Paycheck Protection Program could take the pressure off from doing something in the near term, Boustany, now with Capitol Counsel LLC, said.

“I think Republican interest is going to pivot to how to open up and keep the economy going,” Boustany said. The PPP gives forgivable loans to businesses to keep workers on payroll.

Still, there has been tenuous support in previous years, most noticeable from Republican Sens. Marco Rubio (Fla.) and Mike Lee (Utah) in expanding the Child Tax Credit. Those are encouraging signs in uncertain times, the Democratic aide said.

To contact the reporter on this story: in Washington at kbasu@bloombergtax.com