The spread of the delta variant could force even states that cut off extra unemployment benefits early, like Florida, to offer additional jobless aid, according to President Joe Biden’s U.S. labor chief.

“If Florida has to shut down -- let’s say the numbers continue to climb in the next week or two, and it gets to the point where people are just afraid to go outside their front door,” Labor Secretary said, “then there’s gonna have to be a safety net there for the families that can’t go to work because their industry shut down.”

About half of Florida residents are vaccinated and the state recently reached a record in the 7-day average of cases.

Walsh and Treasury Secretary sent a to Congress earlier Thursday saying that states and local governments can use pandemic-relief funds for additional aid. Federal emergency unemployment benefits of $300 per week and other aid expires Sept. 6, which Walsh and Yellen wrote was “appropriate” given the improved economy. About half of U.S. states have already halted the payments amid a debate about whether the cash disincentivized Americans from looking for work. 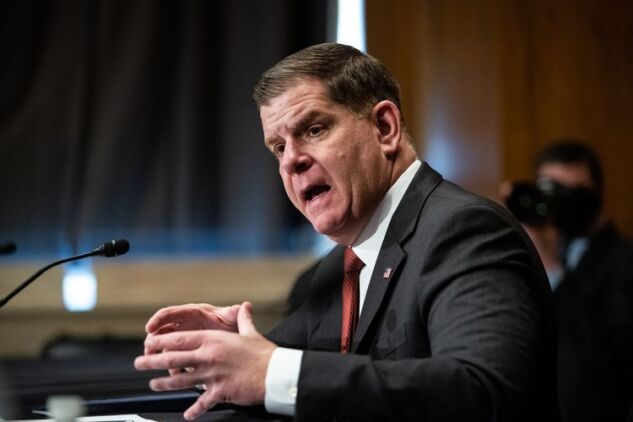 But the delta threat could keep some Americans out of the workforce longer than expected, Walsh said in a wide-ranging interview Thursday with Bloomberg News. “Some governors might have to make the decision of closing down again,” he said. If people aren’t able to work from home, “we’re gonna need those unemployment benefits. So allowing the state to be able to do that is something that’s really important.”

“If I were a mayor today, I’d be watching these numbers really, really closely and if I felt that I could save peoples’ lives and keep people safe by shutting down, I would,” said Walsh, who was previously Mayor of Boston.

The delta variant has upended a smooth labor market recovery, with companies delaying a return to the office, issuing mask requirements and vaccine mandates. The Biden administration has emphasized the need to reopen the economy though cautioned that businesses need to protect workers and consumers.

Walsh supports vaccine mandates, saying that more labor groups and businesses are now listening to science and seeing the rapid increase in Covid-19 cases across the country. The Labor Secretary, who spoke from Boston over Zoom, said that vaccinations and masking should not be a political issue.

In the midst of the pandemic, Congress boosted weekly jobless benefits, extended their duration, and created a program for workers excluded from traditional unemployment insurance like the self-employed. These benefits all expire on Labor Day and will deprive 7.5 million workers of benefits, according to an estimate from the Century Foundation.