Book lovers’ passion for words on the printed page has inspired them to donate millions of dollars to help keep their favorite independent shops afloat and workers paid during coronavirus-prompted closures and restrictions.

In San Francisco, supporters of City Lights Bookstore, home of the beat poets, donated more than $493,000 to a GoFundMe campaign to help the store stay afloat while it was closed.

“After eight weeks of mandatory sheltering-in-place, our booksellers are now allowed back in the store, and boy does it feel amazing to finally be able to get back to work!!” a post on City Lights’ web page said. The renowned destination bookstore reopened May 20.

Authors, publishers, and bibliophiles have donated just under $3 million since March 12 to Book Industry Charitable Foundation, said Pamela French, foundation executive director. The nonprofit foundation, known as BINC, distributed $2.57 million to 470 bookstore and comic book shop employees across the country to help them pay rent, utilities, and insurance, and buy food, she said.

“As it’s coming in, we’re making sure that it gets out to booksellers and stores as quickly as possible,” French said. 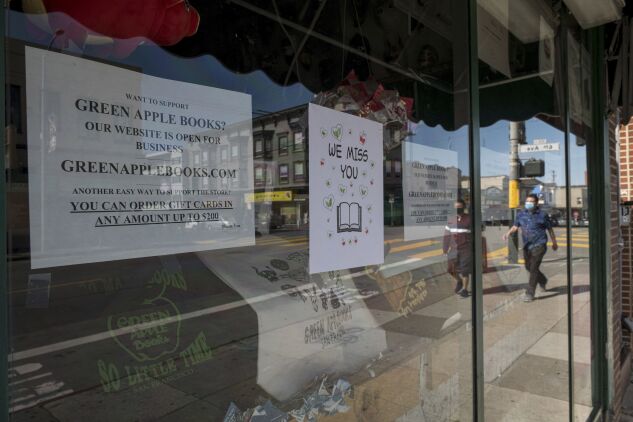 Green Apple Books in San Francisco, which was closed because of the coronavirus, reopened for curbside pickup on May 18.
Photographer: David Paul Morris/Bloomberg

While bookstores have gradually been reopening, browsing in them is a separate issue as owners try to figure out how to make it safe between the stacks for customers and employees.

alifornia retailers, for instance, must develop a Covid-19 prevention plan, including training employees, posting notices about keeping six feet from others, limiting how many people can be in a store at one time, frequently cleaning and sanitizing shared equipment and surfaces, and installing physical partitions.

“It’s never been easy to be an independent bookseller, and (the pandemic) will not make it easier,” said Emily Powell, CEO of Powell’s Books in Portland, Ore.

How many bookstores may close forever isn’t yet known. During the transition to in-store purchases, customers bought books online and picked up their purchases curbside or had them delivered to their homes.

The American Booksellers Association reported a 49% growth in the number of “indie” booksellers in the country to 2,470 in 2018 from 1,651 in 2009, according to a Harvard Business School report in January. Even with more independent bookstores, U.S. book sales dipped in 2019 over 2018, from $10.6 billion to $10 billion, market and consumer data website Statista said.

Book sales this year compared to last year are down 1.5% overall, with sales of about 215 million books, said Kristen McLean, industry analyst for books at market research firm NPD Group.

Given that large sectors of retail closed, buyers looked elsewhere for books, including Walmart and Target, and online sites like Amazon and barnesandnoble.com, McLean said. “It wasn’t demand that shifted. It was where people were buying and what they were buying,” she said.

Buyers’ interests also changed—business leadership books were out, cookbooks and DIY books were selling more as people stayed home. “The big takeaway of this is books have what people in these moments need,” said McLean, who forecasts a “fairly flat” year for book sales even with shelter-in-place orders keeping customers out of stores.

In California, bookstores are reporting 30% or more in lost revenue so far this year, said Calvin Crosby, executive director of the 300-member California Independent Booksellers Alliance, a nonprofit group that supports and promotes independent retail book selling. “I am optimistic that the majority will survive despite circumstances well beyond their control,” he said.

Taxable book sales in the state were already down, with $1.684 billion in sales last year compared to $1.697 billion in 2018, the California Department of Tax and Fee Administration said. Data from the first quarter of this year is expected later this month.

In Portland, Powell said readers’ online purchases helped the small chain, which closed its five stores as the pandemic expanded and then rehired 200 of its 400 employees.

Many online book buyers have turned to Bookshop.org, which has raised about $2.06 million for U.S. independent bookstores since March, said founder Andy Hunter. “One thing that we’ve seen during this crisis is a lot of people are supporting their local bookstores,” he said. Independent bookstores sign up with the platform for online sales and get 30% of the cover price.

“I launched Bookshop because I was worried about Amazon’s growing dominion over the book market and I wanted to give small, independent local bookstores the opportunity to compete with Amazon for their customers,” Hunter said.

Another challenge will come in July and August as stores that received federal financial assistance have to repay loans or ask for forgiveness based in part on how many workers were rehired, and landlords will want rent that was suspended paid, BINC’s French said.

Danbom & Son Books in Denver, which lost about 75% of its business compared to before the city’s shelter-in-place order, is part of the Printed Page co-op so other booksellers who rent space helped pay the bills, owner Dan Danbom said. Denver’s stay-at-home orders went into effect March 24 and lasted through May 11.

“If we wanted to make money we wouldn’t sell books,” said Danbom, whose store reopened May 15 to grateful customers. “These are our friends and these relationships mean as much to us as to our customers. It’s just as important for us to be in the store as for them.’'