Biden speaks in the East Room of the White House in Washington, D.C., on August 3, 2021.
Photographer: Shawn Thew/EPA/Bloomberg

President quelled for now a brewing confrontation with progressive Democrats with a new moratorium on evictions during the pandemic, but the order invites a legal fight with high-stakes consequences for public health that the government may well lose.

The Centers for Disease Control and Prevention’s order on Tuesday, following several days of legal wrangling within the administration, aims to keep tenants who are in arrears from losing their homes until Oct. 3. White House officials hope that’s enough time to stand up a long-delayed $47 billion rental assistance program.

The ban came after Biden’s White House failed to anticipate outrage and finger-pointing from its own party after he called Thursday for Congress to extend a previous moratorium set to expire just two days later. Lawmakers in the House, under lobbying by landlords, failed to act before leaving town for the rest of the summer. 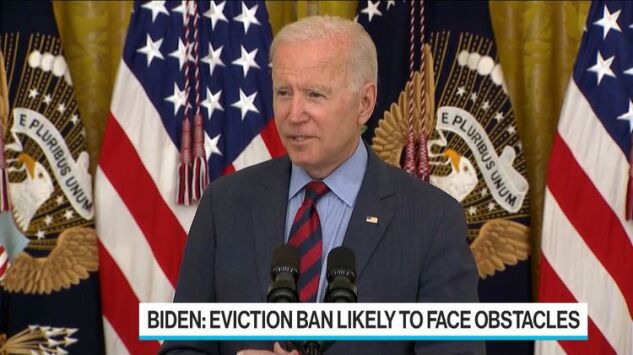 The drama illustrated the White House’s struggle to contain a resurgence of the pandemic fueled by the delta variant of coronavirus, which has the U.S. again recording tens of thousands of infections per day and testing hospital capacity in under-vaccinated states, particularly in the politically conservative South. Biden on Tuesday showed his frustration, chastising Republican governors in seven states for banning mask mandates, including in schools.

Biden warned at the White House that the new eviction moratorium “is likely to face obstacles,” given indications by a majority of Supreme Court justices that further bans would require congressional action. He said his administration is urging states and local governments to more quickly distribute federal aid for tenants and landlords authorized months ago that has suffered bureaucratic delays.

The president said he had consulted constitutional scholars on executive and agency action on a new eviction moratorium, asking them, “What could they do that was most likely to pass muster constitutionally?”

“The bulk of the constitutional scholarship says it’s not likely to pass constitutional muster, number one,” he said. “But there are several key scholars who say that it may and it’s worth the effort.”

Those remarks provoked at least one progressive, New York Representative , who predicted lawyers for landlords would cite Biden in their court challenges against the new moratorium.

“It is odd, I think, to raise issues about the constitutionality of your own executive action shortly before making that executive action,” he said. “That is not the behavior, that is not the commentary of someone who is actually trying to help people. And it’s really frustrating to hear that kind of language come from the president of the United States.”

But in its statement accompanying the latest moratorium, the CDC tried to ground the ban in matters of public health, not politics. Evictions are prohibited in areas of the country with substantial or high transmission of coronavirus, the agency said, noting the country’s slowed pace of vaccinations and troubles getting the rental assistance program operational.

“The emergence of the delta variant has led to a rapid acceleration of community transmission in the United States, putting more Americans at increased risk, especially if they are unvaccinated,” CDC Director said in a statement. “This moratorium is the right thing to do to keep people in their homes and out of congregate settings where COVID-19 spreads.”

The order would cover about 80% of U.S. counties and 90% of renters, a person familiar with the matter said.

Attorney General said Thursday that the Justice Department will “vigorously” defend the renewed evictions moratorium and will also work with state court leaders to find “diversion strategies” to keep people in their homes. He said the potential eviction of millions of tenants could exacerbate the nation’s ongoing health crisis.

Among concerns he cited for the Justice Department was that evictions would lead to more risky encounters between those made homeless and police.

If a legal challenge gets to the Supreme Court before the eviction ban expires, the administration risks conservative justices using the case as an opportunity to curtail broad powers the CDC has exercised during the pandemic, said Lindsay Wiley, Director of the Health Law and Policy Program at the American University Washington College of Law.

The court declined to issue a stay against the CDC’s previous moratorium in June, but by a narrow 5-4 majority. The deciding justice, , said in an opinion that he believed the CDC’s action was unconstitutional and that he would not support an extension beyond July 31 unless it was approved by Congress.

The CDC has used its authority in the pandemic to require Americans to wear masks on airplanes and public transit and to regulate the activity of cruise ships, in addition to halting evictions.

“The court could issue a decision that could adopt a very far-right constitutional interpretation, which could create vulnerability for environmental and financial regulations. There is a spectrum of consequences,” Wiley said. “The White House is right to be careful in pressing this issue.”

Senator , a Pennsylvania Republican, said Tuesday evening on Twitter that the new moratorium “lacks both a legal basis and an economic justification” and that the White House should have focused on “dealing with its failure to get money owed to landlords rather than papering over its failures with illegal actions.” 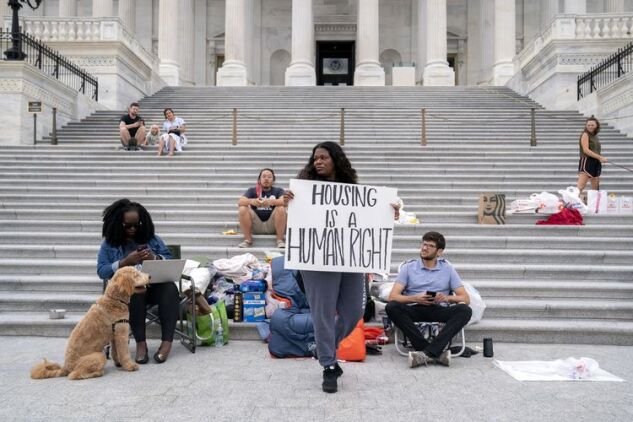 Cori Bush, center, joined by Congressional staffers and activists, protests the expiration of the eviction moratorium outside of the U.S. Capitol on July 31.
Photographer: Stefani Reynolds/Bloomberg

But political concerns -- including the growing anger of fellow Democrats -- and the potential evictions of millions of Americans ended up trumping the White House’s legal qualms. Already angered by the White House’s perceived lack of action on voting rights and climate change, progressive activists grew furious about the lapse of the eviction moratorium.

The White House didn’t call on Congress to try to extend the moratorium until two days before it was set to expire, even though aides had weeks to prepare. Congressional leaders called them on it, leading to a rare blame-game between top House Democrats and the Biden White House.

The executive director of the activist group MoveOn.org, , said pressure from progressive lawmakers had forced the Biden administration to act on a new moratorium. She cited Representative Cori Bush of Missouri, who slept on the steps of the Capitol for several nights beginning on Friday to protest the expiration of the previous ban.

“She showed us the urgency and the substance of this and how it will affect millions of people. This could have quietly gone into the night if she had not organized and protested,” Epting said of Bush, who herself once was homeless.

The White House spent days trying to explain the legal reasoning behind an initial CDC decision that it couldn’t issue another extension and dispatched top officials, including Vice President and Treasury Secretary , to answer lawmakers’ questions.

Earlier Tuesday, Yellen faced considerable anger from House Democrats, who demanded the administration take immediate action to extend the ban on evictions, according to multiple people who participated in the call.

Yellen stressed that the administration was focused on getting states and localities to more quickly distribute the rental assistance Congress has already approved.

Anthony Michael Kris, an assistant professor of constitutional law at Georgia State University, said that if Kavanaugh and the high court’s conservatives wind up striking down the new moratorium, Biden could seize a political opportunity.

“Democrats can put the blame on the Supreme Court, and say, ‘you know, we tried everything we could, Republicans and the Supreme Court just could not let this happen,”’ he said. “That’s a lot better position politically, in terms of strategizing, than just: sit on your hands and do nothing.”