Ramin Sayar, president and chief executive officer at Sumo Logic Inc., reacts at the company's headquarters during the initial public offering (IPO) in Redwood City, California, U.S., on Thursday, Sept. 17, 2020. Sumo Logic opens trading at $26.64/share after its $325.6 million IPO priced at $22 per share, above its $17 to $21 offering range.
Photographer: David Paul Morris/Bloomberg

The pandemic-defined year of 2020 arguably benefited the tech companies of Silicon Valley more than any other industry or region in the country. More than ever, consumers and businesses came to rely on the already enormous Silicon Valley tech companies such as Apple, Alphabet, Facebook, and Netflix to keep them productive and to get them through the isolation and boredom of Covid-19 lockdowns and social distancing. But other companies in Silicon Valley also made significant contributions—including the newcomers to the 2021 Fenwick–Bloomberg Law SV 150 List. 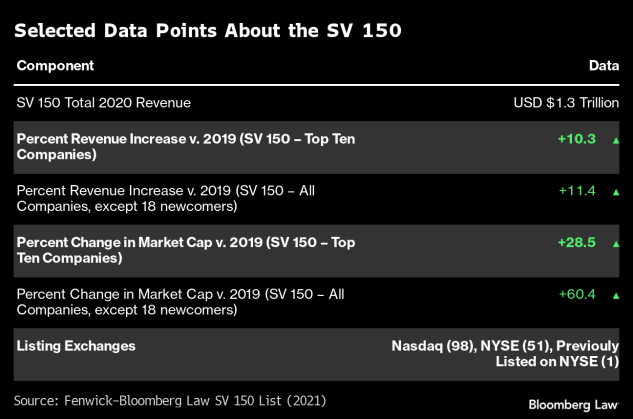 There were 18 new entries landing on the list this year, and half of them arrived after completing a traditional IPO. The other nine newcomers break down as follows: 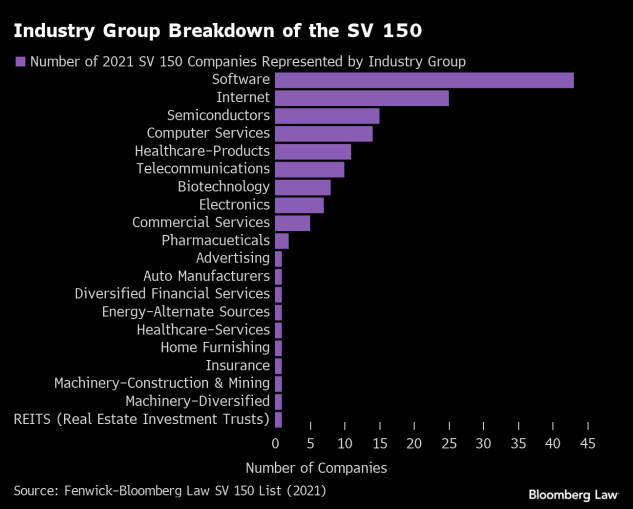 The companies comprising the 2021 SV 150 are diverse, with 20 different industry groups represented. Software companies make up the largest contingent, with 43 companies on the list. Coming in second are internet companies with 25 entries, followed by semiconductors with 15 and computer services with 14 firms.

Featured Newcomers to the SV 150

We now take a closer look at some of the newcomers to the SV 150.

The year 2020 was never short of headline stories. After the pandemic and the presidential election, perhaps the biggest story for equity markets was the ascension of special purpose acquisition companies to become the leading IPO type. It is perhaps apropos that the highest-ranking new member of the SV 150 is Opendoor Technologies, a company that went public via a reverse merger with a SPAC in December. Opendoor’s proprietary algorithm assists its users in flipping homes, a popular investment strategy in hot real estate markets. Earlier this year, it adjusted its platform to help all-cash buyers beat out similarly priced offers.

Besides Opendoor, one other company made its SV 150 debut after going public via a merger with a SPAC. Skillz, an operator of a mobile games platform, went public in December. (SV 150 Rank: 138)

Cloud-data software company Snowflake went public via a traditional IPO in September. The value of its IPO floated in at $3.36 billion, making it the largest initial public offering for a software maker ever. The company sold stock at $120, but shares opened trading at $245—more than double the offer price. Examples like this add more fuel to the fire for those who argue that underwriters often underprice IPOs to the detriment of selling shareholders who receive less—sometimes significantly less—than the true value of their shares.

At the close of its first day as a publicly-traded company, Snowflake’s market value exceeded those of Dell, Uber, and General Motors. Snowflake’s 2020 revenue was $592 million. (SV 150 Rank: 107)

Longtime unicorn Airbnb finally went public in December—and not a moment too soon for its employees. The company had planned to go public in 2020 either via a direct listing or using a traditional IPO. Those plans got washed out by the cyclone that was Covid-19 as the pandemic largely shut down travel worldwide, leading to mass cancellations of Airbnb bookings. It appeared the company would need to delay its IPO, which would have resulted in its longtime employees—who needed the company to go public to take advantage of employee stock options expiring at the end of the year—running out of time and out of luck.

Somehow, someway, Airbnb regrouped, people started using Airbnb for destinations they could easily drive to or work remotely from, the IPO market went gangbusters, and the company put an IPO back on the menu for 2020. Airbnb, like fellow SV 150 newcomer DoorDash, employed a hybrid auction model for its offering, giving it more control over the ultimate price and the distribution of its shares and, it hoped, reducing the chances of a big first-day price pop. But perhaps investor appetite for shares was simply too great, because after the offering was priced pre-trading at $68, the stock began trading at $146. DoorDash (SV 150 Rank: 48) also experienced a significant price pop, with its share price more than doubling in its debut.

Cloud-based log management and analytics services provider Sumo Logic showed it is no slouch with its strong debut in September. The company completed its $368 million offering at an offer price of $22. The price of those shares rose 22% in their first day of trading, giving Sumo Logic a market value of $2.65 billion. The company’s market cap is only about seven to nine times forward sales multiples, which is much lower than fellow SV 150 newcomer Snowflake.

Affirm is yet another Silicon Valley technology company that experienced a big first-day price pop when it went public. Affirm’s shares nearly doubled on their first day of trading, rising from an offer price of $49 to $97.24.

The fintech company offers loans to online shoppers that allows them to divide their purchases into installments. Affirm partners with various merchants, with home exercise company Peloton representing about 30% of its revenue. Affirm had $670 million in total revenue in 2020. (SV 150 Rank: 103)

If you’re reading this on the Bloomberg Terminal, please run BLAW OUT<GO> in order to access the hyperlinked content, or click here to view a web version of the article.