The limitations on people’s social lives caused by Covid-19 have pushed many to try, or spend more time engaging in, Madden NFL, Epic Games Inc.'s Fortnite, and other online games that several new suits allege hook players on gambling.

Suits against game makers like EA and Epic Games, and platforms like and , liken transactions called “loot boxes” to Las Vegas-style slot machines, and assert they are illegal under California anti-gambling law.

The litigation over the items—digital grab bags that offer the chance to acquire virtual things like weapons and avatars—is expected to grow as the games attract new players and existing players spend more time online.

The psychological aspects of loot boxes encourage addictive behavior, the lawsuits say. The amounts at stake can be significant as some players allege they’ve spent hundreds of dollars on the virtual loot and the in-game currency used to get it. Some parents also say their kids have used their credit cards without their knowledge. 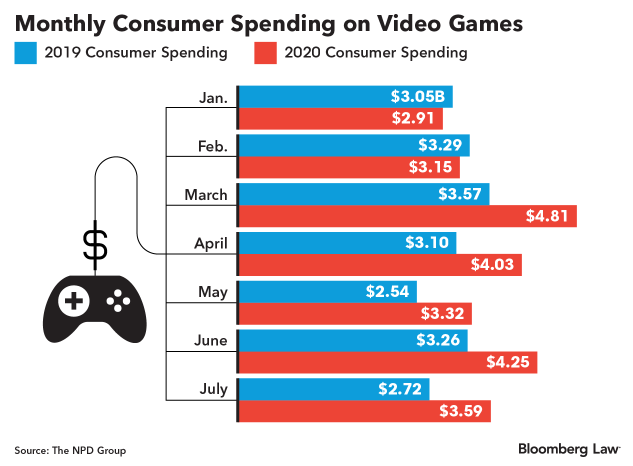 Children and adolescents are especially susceptible to the lure of loot boxes because they lack impulse control and financial judgment, the suits say.

“It’s sort of a hidden world,” said attorney Tim Blood, of Blood, Hurst & O’Reardon in San Diego, who has filed several new suits on behalf of minors and adults.

“People don’t talk about this stuff,” but “it’s a problem far more widespread than I would have expected,” Blood said.

More than 214 million people in the U.S. play video games for an hour or more every week, according to the Entertainment Software Association, which represents the U.S. video game industry. Some 75% of all households have at least one person who plays, the ESA said in a report released in July 2020.

But those figures predate the pandemic. Statistics from a marketing research organization provided to Bloomberg Law show a marked increase in consumer spending on videogaming in the months since the pandemic.

Consumer spending on video gaming in the U.S. reached a second quarter 2020 (April to June) $11.6 billion, an increase of 23% when compared to the same period last year, and a 6.3% increase over the first quarter’s $10.87 billion, according to data provided by the NPD Group.

Many popular games, including Fortnite, Brawl Stars, and Madden NFL, significantly boost their revenue by relying on real-world purchases of loot boxes, which use the same kinds of psychological manipulation that promotes gambling and other addictive behavior, the lawsuits allege.

Players don’t know what kind of virtual loot they paid for until the boxes are opened, and the most sought-after items are allegedly the least likely to be received.

Players can acquire loot during normal game play, but that can take a long time. They can speed up the process by using virtual game currency bought with real money, or by just paying directly for the loot boxes.

Blood’s firm filed class suits recently against game maker Supercell Oy over its Clash Royale and Brawl Stars games, and against Electronic over its FIFA soccer and Madden NFL games. The plaintiff in the EA suit alleges he spent some $600 on team pack loot boxes.

Meanwhile, and Epic have both been hit with suits over Fortnite. A California mother alleges in one complaint her son used her debit card without her permission to buy hundreds of dollars worth of “V-Bucks.”

The suits are similar to recent complaints against Apple and Google, which were targeted because they cover a large number of games, Blood said.

“You get an adrenaline rush, an endorphin rush as you’re waiting for it to open” and you see what’s inside, Blood said.

People react to “the bells and whistles, the slot machine effect of a loot box,” he said.

And the odds of getting a particular item “are constantly changing,” which makes it even worse than casino gambling because people don’t know their chances of winning, he said. With slot machines and many other games of chance, the odds are the same every time, Blood said.

In the U.S., much of the video game industry self-regulates through the ESA-created Entertainment Software Rating Board, which age-rates games according to language, violence, and other criteria.

“Using the ESRB ratings can help game companies demonstrate that they are taking reasonable measures to provide consumers with the information they need to make informed decisions,” said attorney Steven Blickensderfer of Carlton Fields in Miami.

“However, using the ratings does not guarantee protection from lawsuits,” said Blickensderfer, who is co-chair of the firm’s esports and electronic gaming practice but isn’t involved in defending any loot box suits. And, “we may not know how much protection” they do provide until the litigation has played out, he said.

Also uncertain is what, if anything, the Federal Trade Commission may do.

The report came from a commission-sponsored workshop held last summer.

But during the workshop the ESA announced that Microsoft, Nintendo, and Sony will begin requiring the disclosure of loot box odds for new games, and for existing games that add the features.

The designation, revealed in April, is an extension of the “In-Game Purchases” descriptor introduced in 2018 for use with games that have new levels and other additional features available for purchase.

A bump in litigation is expected partly because parents are becoming more aware their kids are playing games with loot boxes in them, Blickensderfer said. And, he said, a growing consensus is forming that in-game microtransactions need to be regulated.

“We do not know where things will go from here. But one thing’s for sure, this time the FTC will be watching,” Blickensderfer said.

Blood, however, said courts can force game developers to dampen some of the negative effects of loot box transactions. For example, he said, they can order makers to limit the amount of purchases over a specified time period, or have them remove some of the problematic features that may make them exciting, but also make them addictive.

Companies also be legally forced to improve parental controls, so game features like those related to buying loot are limited when younger players are playing, Blood said.

“The items purchased have no value outside of the game and are an optional element that can enhance the experience when playing skill-based video games,” ESA said.

Also, “The video game industry has long provided players and parents with tools and information to manage the amount of time and money that can be spent in a game and tailor these experiences for themselves and their families,” it said.

Blood said both arbitration clauses and class action bans are some of the biggest weapons being used to defend against the litigation. Those defenses have had mixed success.

Early this year, a Fortnite loot box suit against Epic was dismissed and the challenged transactions voided. But Epic agreed to refund the plaintiff’s money.

Epic is also currently seeking to dismiss still another suit in the Northern District of California, after a judge there denied its earlier arbitration motion.

Google and Apple, too, recently filed motions to dismiss suits against them. They argue partly that because they don’t create any games, they’re protected by the federal Communications Decency Act.

The companies, as well as Supercell, which said it will defend itself vigorously, also deny that loot boxes constitute gambling.

Electronic Arts said it had no comment on the litigation.