As the Supreme Court wrapped up its first high court term with its strengthened conservative majority, Chief Justice John Roberts cast the deciding votes in two 5-4 cases, handing high-profile wins to both conservatives and liberals.

But Roberts isn’t the only justice staking out a place in the court’s judicial middle.

Justice Elena Kagan has been in the majority of 6-3 decisions almost as often as Roberts during their years on the court, according to a Bloomberg Law analysis of the 116 rulings that broke 6-3 since the start of the 2005 term. And the court’s newest justice, Justice Brett Kavanaugh, showed signs of joining them.

Both Roberts and Kagan often scope out positions in the middle in order to make the court seem less political, said Ilya Shapiro, a frequent friend-of-the-court filer on behalf of the libertarian think-tank Cato Institute in Washington.

And “the numbers from [Kavanaugh’s] first term raise at least the possibility” that he will join the court’s center, said SCOTUS veteran Melissa Arbus Sherry, of Latham & Watkins’ Washington office. 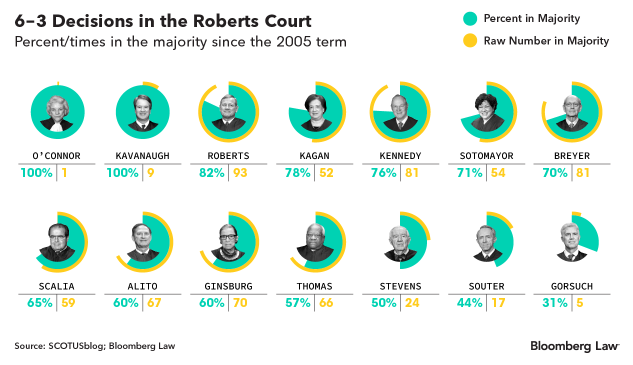 Roberts as a median justice isn’t really a surprise, University of Pennsylvania law professor Kermit Roosevelt said. He was anticipated to be the court’s new center following the retirement of Anthony Kennedy, the most frequent swing vote in 5-4 rulings.

But both Kagan and Stephen Breyer are consensus builders, too, said SCOTUS veteran Joseph Palmore, of Morrison & Foerster, Washington.

He pointed to the court’s recent decision allowing a large Latin cross to remain on public property. Breyer and Kagan—both appointed by Democratic presidents—joined their more conservative colleagues in a 7-2 decision finding that the cross, which serves as a World War I monument, doesn’t entangle government too much in religion.

Breyer has been the liberal justice who has most often crossed over to join the five conservatives in 6-3 decisions.

The Democratic appointees on the court—Justices Ruth Bader Ginsburg, Breyer, Sonia Sotomayor, and Kagan—have crossed over 31 times during the Roberts Court, according to Bloomberg Law data. Breyer has accounted for 16 of those, mainly in criminal matters or other areas in which the federal government is seeking judicial leeway.

But because Breyer took his high court seat in 1996, he’s been part of 6-3 majorities less often on a percentage basis than Kagan, who didn’t join until 2010. Even Sotomayor, who has staked out positions to the left of her colleagues most notably in criminal cases, has been in the majority in 6-3 decisions slightly more often than Breyer on a percentage basis.

Kagan’s higher percentage in the majority in 6-3 cases suggests she’s closer to the Supreme Court’s center.

In particular, Kagan has shown a willingness to side with her more conservative colleagues even where she might dislike the outcome—either because she thinks it’s required under prior precedent or compelled by the language Congress used in the governing statute.

With regard to precedent, for example, in 2012 Kagan sided with the Republican-appointed justices in a 6-3 decision upholding an earlier opinion finding that certain state claims were preempted by federal law.

Kagan said that she doubted that the current court would decide the case the same way today. “But [that earlier decision] governs so long as Congress lets it,” she said.

And in two habeas cases, Kagan joined her conservative colleagues in noting that the standard governing such relief was extremely high for criminal defendants challenging their incarcerations.

In those cases, Kagan joined opinions noting that the Antiterrorism and Effective Death Penalty Act is a statute “that some federal judges find too confining,” but that nevertheless forbids federal judges from overturning a state court decision “simply because the federal court disagrees with the state court.”

The numbers from Kavanaugh’s first term on the high court suggest that he too might be a median justice, said Latham’s Sherry.

Sherry cautioned against reading too much into that small sample, saying less “than a term of data is not enough time to identify any sort of longer-term trend.”

University of Pennsylvania’s Roosevelt said he suspects Kavanaugh will eventually lean more to the right than the middle.

But Cato’s Shapiro said that’s the question: Will Kavanaugh continue to vote mostly with the chief justice in those 6-3 cases or coalesce toward his more conservative colleagues?

The split in that regard is made clear by the data.

In the Roberts Court, the dissenting lineup in 6-3 decisions occurring the most often has been the late Justice Antonin Scalia joined by current Justices Clarence Thomas and Samuel Alito. That trio formed the dissent 14 times in the decade that they sat on the bench together.

But in just over two terms together, Thomas, Alito and Neil Gorsuch—President Trump’s first nominee—have done so seven times.

Shapiro said it speaks more to Roberts’s move to the center than about Thomas, Alito, and Gorsuch serving as a conservative anchor. But if that’s so, it speaks to Kavanaugh’s median status, too.

Gorsuch first took the bench while longtime median justice Kennedy was still there. Roberts, Kennedy, and their more liberal colleagues were the majority against Thomas, Alito, and Gorsuch in four 6-3 cases in the just over one term in which they sat together.

In nearly the same time, Kavanaugh has replaced Kennedy in that lineup three times.