Christopher Bandas, a lawyer who files objections to class settlements to try to extract payment, has held up a dozen big-money, big-company lawsuits in federal courts in California over an eight-year period, according to data collected by Bloomberg Law.

Bandas has objected in cases against , , , , , , and that involved settlement funds worth millions of dollars.

A look at the numbers provides a glimpse into the business model that has put Bandas in hot water: objecting to large settlements to extract a greenmail payment. This is just a small slice of the cases he has been involved in nationally.

Bloomberg Law analyzed every class action filed in federal courts in California—where about one-third of all class litigation is filed—between Jan. 1, 2010, and the end of March 2018.

Objectors show up in about 12 percent of the 1,120 settlements finalized during the study period. Many are one-time objectors—filing on their own behalf or with the assistance of counsel—who felt compelled by the settlement notice to voice their opposition.

But a group of five objectors accounts for 76 of the 135 objections in the data set. Bandas is fourth most prolific.

These numbers may understate Bandas’s influence. He is accused of ghostwriting objections, so his involvement never shows up on the docket in those cases.

One of his known associates is Darrell Palmer, the top objector in the data set, with 25 objections.

Bandas usually doesn’t object to settlements at the district court level, but instead represents objectors on appeal.

In eight out of the 12 cases in the data set, he voluntarily dismissed the appeal. There is no evidence in the record, but class action watchers agree that these dismissals likely signal that the parties paid him to go away. Until recently, objectors didn’t have to disclose the details of side-payments they received to drop an appeal with the court.

There’s no way to know how much money Bandas was paid to drop appeals in these cases, but anecdotal evidence suggests payments between $200,000 and $500,000 aren’t unusual. 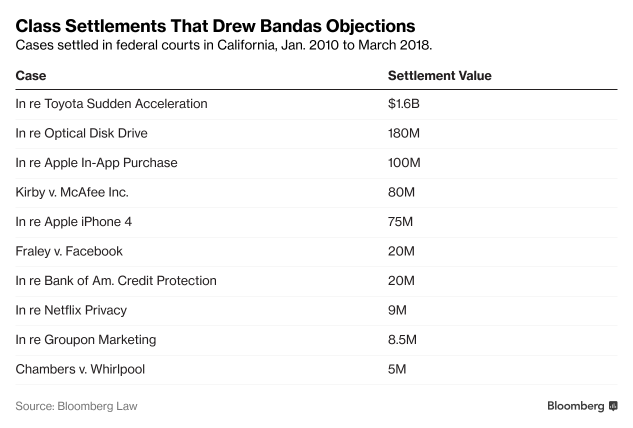