The Mississippi Supreme Court will ponder the definition of a congressional district as it considers whether a medical cannabis ballot initiative wrongly went to voters.

Chief Justice Michael Randolph pulled out a dictionary during Wednesday’s oral arguments as he questioned Justin Matheny of the Mississippi Attorney General’s Office about the state’s practice of using a four-district map to send representatives to Congress and a five-district map, as enshrined in state law, for other purposes.

“If the words are clear, commonly accepted, why do I go anywhere else to go look at statute or arguments about policy?” Randolph said. “What license do I have to go past the plain language?”

Legislators have made seven attempts to update that law, failing each time, according to court documents. 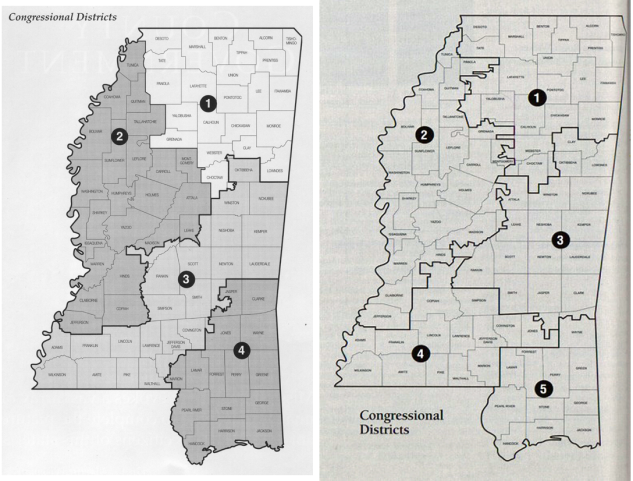 Current Mississippi congressional districts, left, and the map in place before 2001.
Source: Mississippi Secretary of State

Metheny told the court that the one-fifth signature requirement is key to understanding the intent of the language, and legislators could have worded the text differently if they intended something else, Matheny said.

“It’s not just what Merriam Webster says that a congressional district is. You always have to look somewhere to be able to know what it means here and satisfy the signature provisions,” Matheny said.

Since the signature math doesn’t add up under a strict interpretation of the language about congressional districts, the secretary of state shouldn’t have let the medical cannabis go onto the ballot, Kaytie Pickett of Jones Walker LLP, one of the mayor’s attorneys, told the justices.

“The Legislature cannot change the meaning of what a congressional district is by statute. That’s an amendment to the constitution without the approval of the electorate,” she said.

When the constitutional language is unambiguous, the court is bound to apply a plain language interpretation, she said.

Two successful Republican-backed citizens initiatives on the 2011 ballot followed the same process without facing legal challenges. One now requires Mississippi voters to show identification when they cast a ballot. The other stops state and local governments from taking private property through eminent domain for use by another private business or individual.

In November, over 73% of Mississippi’s voters approved the initiative creating a medical marijuana program for patients with certain conditions. The Mississippi State Department of Health has until July 1 to establish that program.

It’s unclear when the court will rule, though Randolph said, “We are handling this as quickly as possible.”

To contact the editors responsible for this story: at krizzo@bgov.com; at tmay@bloomberglaw.com