Health-care industry deals continue to increase during the first half of 2021, with health IT and software deals leading all sectors, according to Epstein Becker Green attorneys and health industry financial/investment analysts at KPMG and FocalPoint Partners. They predict a possible record year, but warn the surge in Delta variant Covid-19 cases and congressional action on initiatives, like prescription drug price controls, could impact some sectors.

The volume of announced and closed health-care industry deals through the first half of 2021 (1,444) are up 73% over the same period last year (830). Similarly, the number of deals in June (283) and Q2 (721) both exceeded previous recorded volumes. At this current pace, deal volume for the 2021 calendar year is expected to exceed 3,000, which would surpass the volume for any other year on record.

With the economy continuing to grow, we anticipate that investment activity will continue at a similar pace. However, the recent surge in Covid-19 cases, driven by the Delta variant, could create some headwinds, and congressional action on various initiatives, such as prescription drug price controls, could impact certain sectors of the health-care industry. 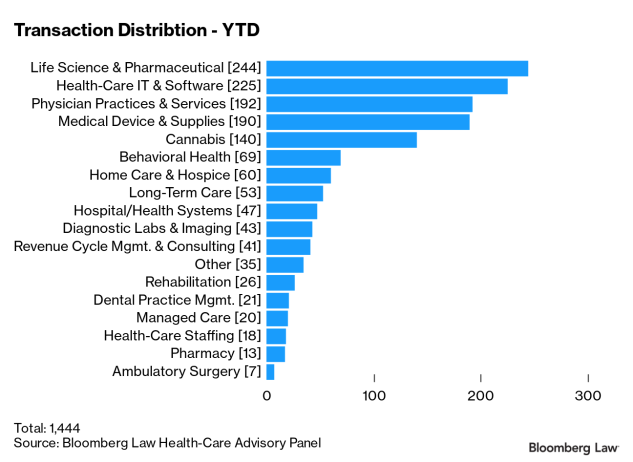 Health-care IT and software deals led all sectors with 50 announced or closed deals in June, the most of any month this year, and 225 transactions in the first half of 2021.

Although utilization of telehealth has been slowly declining for the past couple of months as patients return to traditional care settings, overall demand for innovative health IT remains higher than pre-pandemic levels as patients and providers continue to seek options to have care delivered in virtual environments or other contactless ways.

Some of this has been driven by the realization that there is “no going” back in some ways to the pre-Covid days in light of the possibility of more Covid cases from variants and other potential future pandemics, all of which have highlighted the need for providers and patients to be facile with the utilization of health IT products and platforms.

Some notable health IT transactions include the acquisition of PsyInnovations Inc., a provider of a platform for digital mental health solutions, by DarioHealth Corp., and the acquisition of Steady Health Inc., a fully integrated diabetes platform that uses data from continuous glucose monitoring devices to provide personalized medical care, by Carbon Health.

Physician practices and services saw 26 deals closed or announced in June, up from 16 in June 2020. The sector finished with 80 deals for the quarter, with nearly 200 physician group transactions in the first half of 2021.

In particular, a flurry of four deals were completed in the June by Gastro Health. The acquired gastroenterology practices are based in Northern Virginia and will help the Miami-based company continue to expand its footprint in the Mid-Atlantic region. The deals were closed following Gastro Health itself changing ownership earlier this year, with OMERS Private Equity purchasing the company from its former financial sponsor, Audax Group, and pursuing an aggressive ongoing M&A strategy.

Further, there continues to be an impressive uptick in orthopedic group transactions, as well as substantial continued activity in primary care and urgent care deals. 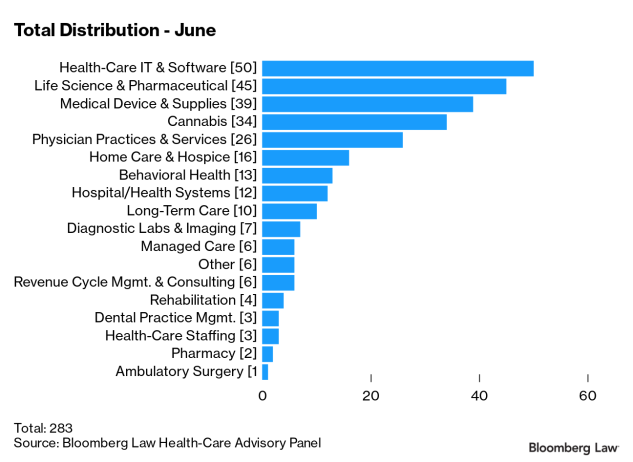 Twelve hospital and health system transactions were announced or closed in June, highlighted by the announcement of the planned merger of Spectrum Health and Beaumont Health, two of the largest health systems in Michigan. The combined entity would be the largest in the state with nearly $13B in revenues across 22 hospitals, 305 outpatient locations, and over 64,000 employees.

Deals of this scale are expected to accelerate in coming months as the Biden administration works to enact and enforce stricter antitrust laws, particularly within the health-care industry. An executive order signed in early July is intended to promote competition and slow consolidation in health-care and other key industries, and could accelerate near-term transaction activity within the hospital sector.

Life science and pharmaceutical had the second highest volume of announced or closed deals in June (45) and is on pace for nearly 500 transactions by the end of the year. Investment interest in the sector is expected to remain high, although this could shift fundamentally, as details on the severity and likelihood of price control measures emerge from Congress over the coming weeks.

Medical device and supplies had 39 announced/closed deals in June and 190 through the first half of 2021. The sector will continue to play an important role in continuing recovery from the pandemic, as well as supporting those areas of the country that are experiencing surges in cases.

Finally, the 34 cannabis transactions also hit a monthly record for this sector, which is skyrocketing around the country, as a majority of states now allow for medical marijuana and/or recreational use. The 140 deals in the first half of 2021 are almost double that of 2020 (73), and will likely reach close to 300 transactions by year-end. Activity is driven in part by the value of the industry, with Q2 2021 marking the second quarter in a row that sales across both medicinal and recreational cannabis surpassed $5 billion.

Carole Streicher
KPMG US
© 2021 The Bureau of National Affairs, Inc.
All Rights Reserved