Proposed abortion restrictions deemed too extreme by a major Louisiana anti-abortion group were pulled from consideration Thursday in the state House after Republican lawmakers tried to weaken them.

The sponsor of the bill (H.B. 813) that would allow homicide charges against those who end pregnancies objected to an amendment from his fellow Republicans to protect pregnant women from criminal penalties and shelved the legislation after the amendment passed.

Rep. Danny McCormick drafted the legislation with assistance from a pastor and the Texas-based Foundation to Abolish Abortion.

Louisiana Right to Life and Gov. John Bel Edwards, an anti-abortion Democrat, opposed the original version of the bill because it didn’t exempt mothers from criminal charges.

The anti-abortion group supported an amendment from Rep. Alan Seabaugh (R) that would allow criminal charges only against abortion providers. Those penalties would take effect if the U.S. Supreme Court overturns its 1973 Roe v. Wade decision, which also would trigger a 2006 Louisiana law banning abortion. 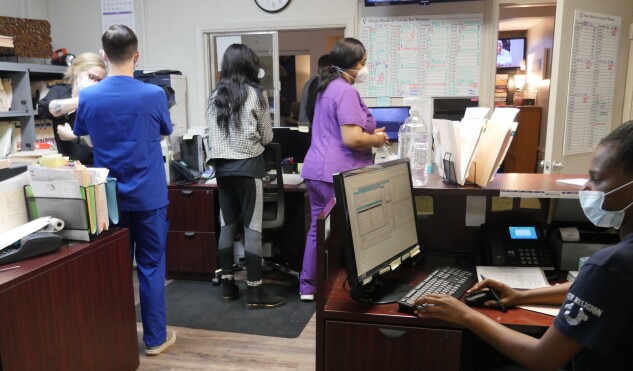 Employees work at the Hope Medical Group for Women in Shreveport, La., on April 19, 2022.
Photographer: François Picard/AFP via Getty Images

Seabaugh’s amendment mirrored a similar proposal (S.B. 342) the state Senate passed specifying that the state’s definition of abortion wouldn’t include miscarriages, ectopic pregnancies, or efforts to save the life of the mother. It also would exempt pregnant women and the use of contraceptives from criminal prosecution.

“The amendment would also be consistent with current law that addresses abortion separately from birth control and in-vitro fertilization,” Louisiana Right to Life said in an emailed statement.

McCormick’s original legislation had “constitutional problems” with its declaration that Louisiana had the right to ignore U.S. Supreme Court decisions involving abortion, as well as threats to impeach state judges who attempted to stay or overrule any of its provisions, Seabaugh said on the House floor.

Louisiana Republicans, who usually support stringent abortion restrictions, should be celebrating because a draft opinion leaked last week indicated that the U.S. Supreme Court could soon overrule the seminal cases establishing a constitutional right to end a pregnancy before viability, he said.

“We should not be at each other’s throats over a bill that is blatantly unconstitutional, makes criminals out of women, and would not prevent a single abortion, and as far as I can tell was only presented to give a couple of misguided people a platform,” Seabaugh said.

The House passed Seabaugh’s amendment 65 to 26.

McCormick then asked for the bill to be returned to the calendar without a final vote.