Gabrielle Higgins has represented patent owners and challengers more than 100 times at the U.S. Patent and Trademark Office. And every time, her lead opposing counsel has been male.

“I cannot think of a single occasion where my opponent against whom I am arguing has been a woman,” said Higgins, a partner with Ropes & Gray LLP’s intellectual property practice.

So Higgins and other female patent attorneys said they weren’t surprised by a recent report that found women account for only 10% of total attorney appearances in post-grant proceedings before the agency’s Patent Trial and Appeal Board. The study, by the PTAB Bar Association, also revealed that women composed only 6 of the top 100 lawyers appearing in the most PTAB trials, while 20% to 30% of registered patent attorneys are women.

“Many of us that practice there have the experience of having a room full of people and being only woman in the room,” said Michelle Armond, a founding partner at Armond Wilson LLP who has served as lead counsel at PTAB administrative trials.

Practitioners blame the dearth of women practicing at the PTAB in part on pipeline problems. Fewer women enter science, technology, engineering, and mathematics—known as STEM fields—from which many patent attorneys emerge.

That leads to patent practices where men take the lead and handle most of the cases, attorneys say.

“We’re missing out on a lot of talent. A lot of law firms and clients go to the same usual suspects over and over,” Armond said. “There are lots of women out there that have long pedigrees and good tech knowledge. I think that’s getting overlooked, and that’s a shame.” 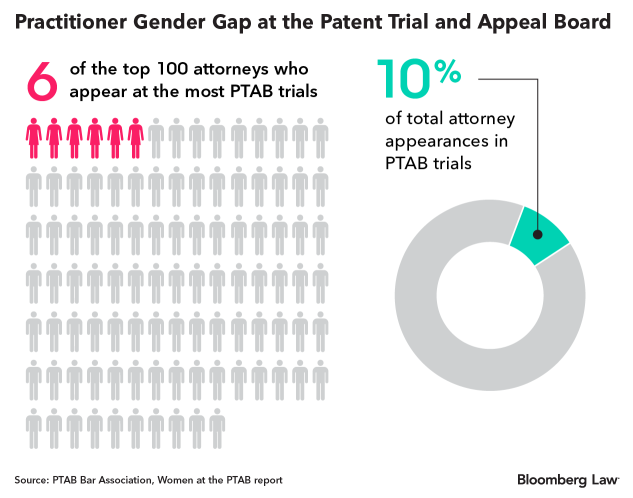 The lack of female participation in PTAB disputes was noticed far before the report was released in November.

Erika Arner, a former PTAB Bar Association president, said the gender disparity was apparent at the group’s first annual meeting in March 2017, where attendance was about 450-500 people.

“When you looked around that room, it was predominately male. It was hard to miss,” said Arner, a partner at Finnegan, Henderson, Farabow, Garrett & Dunner, LLP.

After Arner became president in 2018, she asked the board of directors to consider forming what ended up becoming the Women’s Committee to address gender issues in the PTAB practice.

The report found that among law firms and entities that have appeared in PTAB disputes, more than 1,300 have never had a women appear on their behalf. Women accounted for just 21% of total attorney appearances in biotech proceedings and 8% in semiconductor proceedings at the PTAB among the top 100 firms by number of each area, according to the report.

PTAB practitioners contend that part of the problem stems from the pipeline leading people to practicing before the board.

“You have to be a patent attorney, and to do so you need scientific or engineering training,” Armond said.

Those fields are lacking in female participation, attorneys say.

“There’s always been a dearth of women in those fields,” said Marcella Bodner, an intellectual property special counsel at Cole Schotz P.C. She works on matters decided by the PTAB but hasn’t personally appeared before the board.

“When I went to engineering school, I was one of three women in the class,” Bodner said, referring to each particular course.

Bridget Smith, a Lowenstein & Weatherwax LLP attorney who is serving as lead counsel in PTAB proceedings, said she “can’t recall running into another woman in a deposition.”

The patent office, however, has a better track record with gender diversity hires. About a third of the PTAB’s 267 judges are women, PTO spokesman Paul Fucito said in an email. He also said women compose nearly 30% of the agency’s 9,224 patent examiners.

Practitioners have noticed. “The judges they’ve hired, they do a good job trying to hire diversely,” Smith said.

The PTAB Bar Association, in its report and among its members, are suggesting ways to increase the number of women partaking in board proceedings.

One route is for practitioners to encourage law firms or companies to choose women to represent their interests at the PTAB. Higgins said she’s been given opportunities by her firm and is fortunate to have clients supporting diversity.

Higgins, who has served as co-chair of the PTAB Bar Association Diversity Committee, said that when she pitches a team to represent clients in disputes, “it’s going to be diverse.” She noted the importance of pushing to maintain a diverse team through an entire proceeding, including the oral argument.

Another is starting with the board itself, particularly by asking the panel of judges to allow a party to split their argument with a junior member of their team.

“I will stand up and say, ‘If it’s okay with the board, I’m going to have my co-counsel, Ms. So-and-So, argue this particular issue. And they’ve been absolutely on board with that,” Higgins said.

Some advocate for a greater push to get women involved in STEM fields.