The firm is letting associates work from wherever they please—permanently. It’s either brilliantly forward-thinking or gimmickry.

I never know whether Quinn Emanuel is more creative than your average Big Law firm or just savvy in grabbing attention.

In case you missed it, John Quinn, the firm’s founder, just announced this week that all its lawyers, including those babes fresh out of law school, can “work from anywhere”—permanently.

While the rest of Big Law is all in a dither about when and how to return to the office, Quinn Emanuel is telling its lawyers to roam wild and free. Death to the office! Remote work forever!

Depending on your vantage point, it’s either the most progressive policy to hit Big Law since paid paternity leave and free egg freezing or it’s a disaster in the making that will leave young associates untrained, unmentored, and unmoored. It could also spell the end of workplace culture (good or bad) as most of us know it.

So is this brilliantly forward-thinking or sheer gimmickry to gin up recruits in a competitive market?

“You can call it a gimmick if you like,” Quinn replied to me. “But if you want to work remotely, people will find a way. And we’re out there with it.” He went on to say that he intends to find talent wherever it might be. “There are lawyers who can make great additions to our firms who are outside of the 13 places where we have offices,” he said. “There might be someone who’s in Boise, Idaho who wants to do this kind of practice but wants to do it remotely.”

Quinn mentioned that hypothetical lawyer in Boise so often during our conversation that it made me wonder whether that Midwest city is a prime recruiting ground. It also triggered another question: Is the firm dangling the shiny object of work-where-you-please policy because it’s losing lawyers?

“False!” Quinn replied. “We don’t have the [high] turnover that others do. It’s rare that someone will leave our practice for another large firm to do litigation. I’m not saying it doesn’t happen but it’s rare.” The firm’s spokesperson said its lawyer headcount increased from 810 in October 2020 to 865 in October 2021)

One thing I’ve learned about Quinn over the years is that he relishes being an iconoclast. And he always seems certain that he’s on the cutting edge. “No other firm will adopt this [permanent remote work policy] because the legal profession is slow and conservative,” he told me. “They look backwards.”

Sometimes the firm’s wacky ways prove prescient. For instance, the firm got rid of dress codes long before “business casual” became a Big Law staple. In fact, it’s carried “casual” to the extreme—right to the edge of sloppiness. (I remember lawyers roaming about in its New York office in flip flops and shorts—a jarring sight back in 2011.) 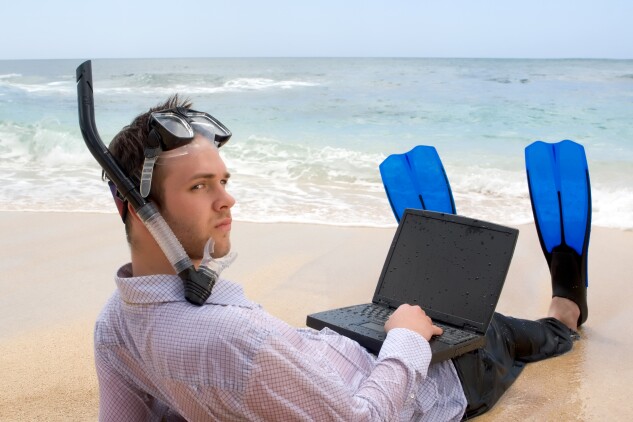 Being ahead on sartorial matters is one thing but is a permanent remote work arrangement doable or desirable?

“There is powerful evidence from 20 years of AmLaw financial data, modeled by Evan Parker of Parker Analytics, that geographic concentration—[meaning] lots of lawyers clustered together in one or just a few big offices—is a powerful predictor of profitability,” says William Henderson, a professor at Indiana University’s Maurer School of Law. He adds that complex matters require “high-bandwidth collaboration, which is what a big office provides.”

But Henderson isn’t discounting Quinn Emanuel’s remote work model: “I applaud Quinn for experimenting,” adding that he feels “it will eventually work if the teams of litigators periodically come together for in-person meetings and training sessions.”

In fact, Quinn says he envisions just that, though the details are vague at this point. “Initially, people will need to spend time in the office,” he said. “The specifics have not been worked out yet.” In any case, he stresses that this will be a universal policy, covering even the most junior lawyer: “Everyone will be eligible. It’s not just for those who’ve been here for a certain number of years.”

That might sound appealing and empowering but is it all that it’s cracked up to be? Some see the freedom to work from Boise or Timbuktu as a positive in the work/life balance equation, others not so much. One third-year associate at another Big Law firm in New York calls permanent remote work a “smart” idea. “If I’m working with a team in DC, I don’t see what’s gained by being in a Manhattan office as opposed to my Brooklyn [home] office,” he says. Another associate—a first year at a different New York firm who went through her summer associate internship without setting foot in the office—dreads the policy: “It’s worse when there’s no guideline when to show up because you have no idea what you’re supposed to do.”

So is this forever remote policy an illusory perk like unlimited vacations, which Quinn Emanuel also offers? Over the years, some associates have told me that unlimited vacations are loathed because lawyers end up taking far less vacation time than the traditional four-weeks. “It’s a total scam because everyone is scared about taking vacations,” says one mid-level associate.

When I asked Quinn about the unlimited vacation analogy, he replied: “Boy, you are cynical!” He also assured me that the firm encourages lawyers to take vacations.

I plead guilty to being cynical but I come by it honestly.

One thing we’ve learned from the pandemic is that it’s possible to be a high-producer in legal practice while barely having any human contact beyond the faces on the computer screen. Perhaps that is the future and physical offices will be as quaint as a Brooks Brothers suit.

I only wonder if that’s to be celebrated.