She’s been a disaster for women. Thank goodness, the jury didn’t buy her abuse victim schtick.

Hallelujah. Elizabeth Holmes is going to the slammer.

Granted, she hasn’t been sentenced yet but the bet is she’ll be serving time. It’ll likely be a minimum security facility but it’s prison nonetheless.

That might sound harsh but I think that captures the sentiment of many women who’ve been working in the trenches of law, business, and other male dominated professions. It’s not that women are gleeful that the founder and CEO of Theranos got slapped with a guilty verdict for duping investors. It’s more like relief.

“I was obsessed with all the tentacles of the trial,” says a partner at a Big Law firm in New York who specializes in biotech work. She adds that she worried that Holmes would be exonerated despite the evidence. “I am glad she was convicted on at least some counts.” (Holmes was found guilty of four counts of investor fraud but cleared of fraud against patients. The jury deadlocked on three additional charges.)

Let’s not mince words: Holmes has been an unmitigated disaster for women. First, she styled herself as Steve Jobs reincarnated, cloaking herself in androgynous black turtlenecks (though often wearing bright red lipstick), feeding our fantasy that she was the female messiah of Silicon Valley. It was superb theater—and not much else.

While some Silicon Valley commentators, like Ellen Pao, have argued that it’s sexist to nail Holmes for hyping her product when male tech entrepreneurs do it all the time without consequence, the fact remains that Holmes did women no favors with her lies. Fair or not, women are held to a higher standard at this juncture.

“Any major or even minor failure of a woman leader in tech is generally not helpful to other women in tech,” says the head of IP at a major law firm in the Bay Area, noting the scarcity of women in that sector. “I certainly worry that we have taken several steps back, and it may take a long time to recover,” she adds.

And what was almost as bodacious as the high-tech snake oil that Holmes peddled? Her metamorphosis from confident Girl Boss to naif/abuse victim during her trial. Gone were the severe black turtlenecks and pulled back hair. Instead, she strode into court sporting nondescript suit ensembles that could have come from the sales rack at Ann Taylor, with her blond tresses softly framing her face. What’s more, she often entered and exited the courthouse clutching the hands of her mother or boyfriend (sometimes both)—signaling her vulnerability and neediness. 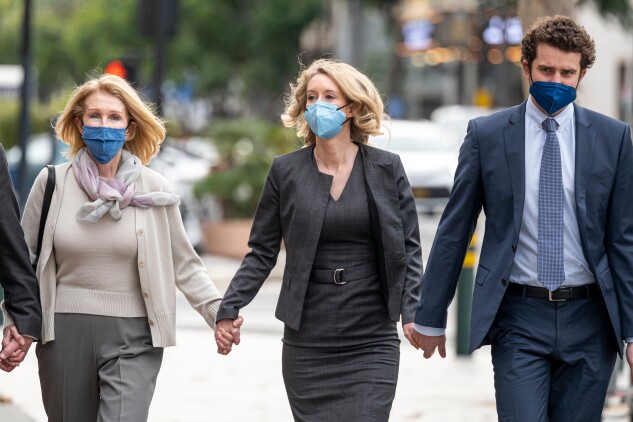 But what I find particularly offensive and galling was how she exploited the abuse of women and attempted to ride the MeToo wave, as if by declaring herself a victim, we should stop in our tracks and heavily discount the evidence of her lies.

During her trial, Holmes recounted—with tears—how she suffered abuse at the hands of Ramesh “Sunny” Balwani, her Pakistani-born former lover and business partner, who’s also nearly 20 years her senior. Holmes said he controlled her life: “He impacted everything about who I was,” adding, “and I don’t fully understand that.” She also alleged that he raped her: “He would force me to have sex with him when I didn’t want to because he would say that he wanted me to know he still loved me.”

Holmes also dropped a related bombshell during her trial: She said she had been raped during her freshman year—which, she explained, is why she dropped out of Stanford University and poured her heart and soul into Theranos. That revelation also suggests that Holmes is a long-haul abuse victim who might be suffering from trauma.

Before I go on, let’s be clear that it’s possible for anyone, including high achievers, to be victims of abuse. But we’ll probably never know about the power dynamics between Holmes and Balwani or the truth behind the Stanford rape allegation. According to CNBC, police agencies had no report of the Stanford rape under Holmes’ name. Query: why was that testimony allowed in at all?

All this is to say that there’s room for skepticism about Holmes’ victimization package. It’s important to believe women but that doesn’t mean a blank check.

As for Holmes’ I’m-too-damaged-to-be-capable-of-intentional-fraud argument? Well, that might have been a Hail Mary defense—which is her right to make. Yet, it was nonetheless cynical and sexist. Wasn’t Holmes suggesting, by her own example, that even the most self-assured, powerful woman is an imposter controlled by a master puppeteer—probably a man? So why bother putting women in positions of responsibility?

The message that Holmes and her defense team sent was dangerous and demeaning to women. Luckily, the jury didn’t buy it. The damsel in distress bit seems to be out of style even for someone who played the role so beautifully—and that’s a sign of progress itself.