Big Law bonus season is in full swing, with top law firms handing out up to $140,000 in extra payments to associate attorneys.

This year, associates at the country’s elite law firms can expect a pair of bonuses. Some firms already gave lawyers up to $40,000 in special bonuses during the coronavirus pandemic, while others are playing catch up. That’s in addition to annual bonuses that top out at $100,000.

In a year marked by pandemic-driven cost cutting across the industry, associates welcome the extra cash, which is a possible sign firms have weathered the crisis.

Although payments fluctuated over the last decade, bonuses are one of the most important levers firms can pull to keep young lawyers happy and compete for talent.

How do Big Law associates get paid?

Many firms follow a lockstep compensation model for associates, paying non-partners based on their number of years out of law school.

The system, known as the “Cravath scale,” is named after the Wall Street firm Cravath Swaine & Moore, which historically has set the compensation pace for the industry.

Where do bonuses fit in?

Big Law firms typically also pay end-of-year bonuses to associates, as well as occasional additional awards. Unlike salaries, bonuses are discretionary and may be tied to stringent billing requirements that at times can exceed 2,000 hours per year.

“You have naturally earned that bonus and want to stay to collect that,” Holt said.

Salaries and bonuses have since rebounded, with senior associates seeing their compensation climb at a faster rate than others. This year, total bonuses top out at about 12% of salaries for first-year associates, compared with 41% for senior associates. 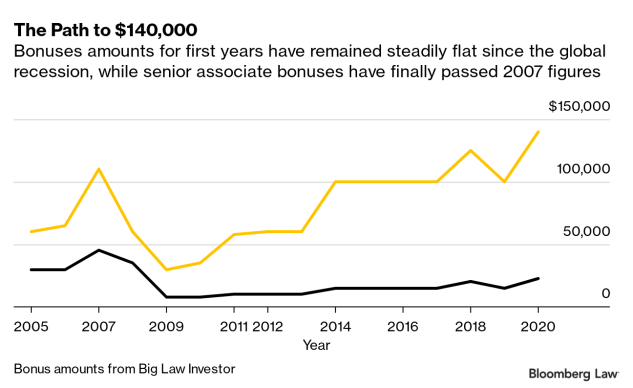 But first-year associates are actually making less than they did in 2007, when adjusted for inflation, Holt said, while senior associate compensation has remained relatively flat.

Why do firms match the Cravath scale?

The race to match bonuses reflects a highly competitive market among top firms for legal talent, whether that’s graduating law students or experienced lawyers that are billing goldmines. Firms want to be seen as paying top of market.

But matching bonuses is not without financial risks, said Kent Zimmermann, a strategic advisor at the Zeughauser Group.

“If you are running a firm that is having a disappointing year,” he said, “and you are competing directly with firms that are setting the market on comp, these bonus announcements and those that follow may cause some heartburn.”

To contact the editors responsible for this story: at copfer@bloomberglaw.com;