Zach Hafer was part of the team of prosecutors that took on crime boss White Bulger.
Ethan Miller/Getty Images

Cooley LLP is continuing to bulk up on trial lawyers, adding former federal prosecutor and Justice Department official Zachary Hafer to the firm as a partner in Boston.

Hafer joins from the U.S. Attorney’s Office for the District of Massachusetts, where he was chief of the criminal division. He will focus his practice on complex litigation, white collar defense and investigations, and trial work, the firm said.

During his 14 years as a federal prosecutor, Hafer handled a wide range of criminal matters, including the 2013 prosecution of James “Whitey” Bulger. The organized crime boss and FBI informant was tried on 32 counts of racketeering, money laundering and other charges as well as complicity in 19 murders. He later was killed in prison.

“Zach has served at the highest levels of government service in one of the most respected U.S. Attorney’s Offices in the country. He has led the investigation and prosecution of some of the highest-profile and complex cases in New England and the U.S.,” said Michael Attanasio, chair of Cooley’s global litigation department, in a statement.

The 101-year-old firm founded in San Francisco has hired 30 new partners for its litigation group in offices across the country over the last three years, said Luke Cadigan, Cooley’s head of business litigation for the East Coast, in an interview. The additions include former prosecutors like Russell Capone, who joined the Cooley in July after a decade in the Manhattan U.S. Attorney’s office.

Cooley brought in nearly $1.6 billion in gross revenue last year, according to data reported to the The American Lawyer, ranking it among the 20 largest firms in the country. The firm’s revenue has jumped by one-third over the last three years, while its headcount was up 13% to nearly 1,100 lawyers during the same span. 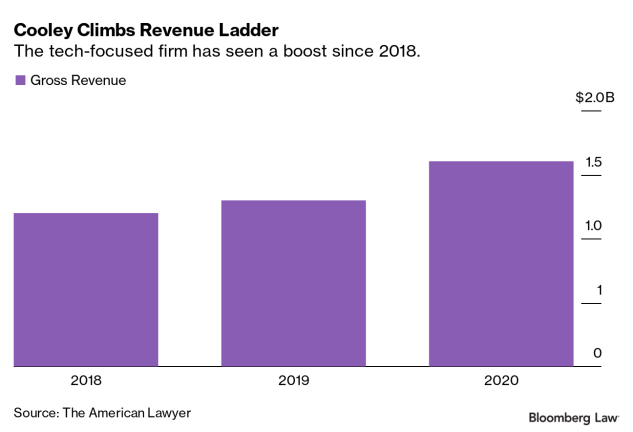 The firm maintains one of the highest regarded emerging companies practices in the country, recently advising upstarts like Zoom Video Communications, Snapchat Inc., and Allbirds. Its litigators have recently represented , , and cryptocurrency exchange Coinbase Global Inc. in court, according to a review of federal dockets.

As chief of the criminal division of the U.S. Attorney’s Office starting in early 2018, Hafer oversaw approximately 100 assistant U.S. attorneys He also supervised all criminal investigations and charging decisions.

Hafer was a law clerk for a federal district court judge before joining Debevoise & Plimpton as a litigation associate. He then joined the U.S. Attorney’s Office for the District of Massachusetts.

“There’s an energy, momentum, and excitement,” Hafer said in explaining why he joined Cooley. “I ’ve been impressed by Cooley’s dedication to building out its litigation and white-collar capabilities on the East Coast and nationally,” he told Bloomberg Law.

“The firm is identified with exciting companies in technology, biopharma, and life sciences,” Hafer said, and has a “growing team of top-tier practitioners, many of whom are fellow former prosecutors and high-ranking government officials.”

(Updated to include additional information on Cooley's recent growth.)

To contact the editor on this story: at copfer@bloombergindustry.co