On a Friday morning in June 2009, Walmart’s then-Chief Executive Officer stood in front of thousands of employees and shareholders at a star-studded corporate gala and announced that the world’s largest retailer needed more female leaders. His pledge to make changes would have a major unintended consequence — a setback for Black representation.

Duke that day unveiled a global women’s council designed to help boost the share of women in senior leadership roles, then at 27%—a glaring disparity, when women made up more than half of Walmart’s U.S. workforce. Jump forward 11 years, and Walmart has boosted that share to nearly one-third. Meantime, the share of Black leadership roles has recently declined.

Walmart’s focus on women—spurred by a class-action gender —left Black men and women on the outside looking in, according to a half-dozen African-American former associates who worked at Walmart’s headquarters in Bentonville, Arkansas. These people, who requested anonymity as some still live there and all fear retribution for criticizing the nation’s largest employer, depicted an environment where promising Black staffers repeatedly failed to break into the company’s officer ranks, while White women gained, buttressed by a strong career-development network. 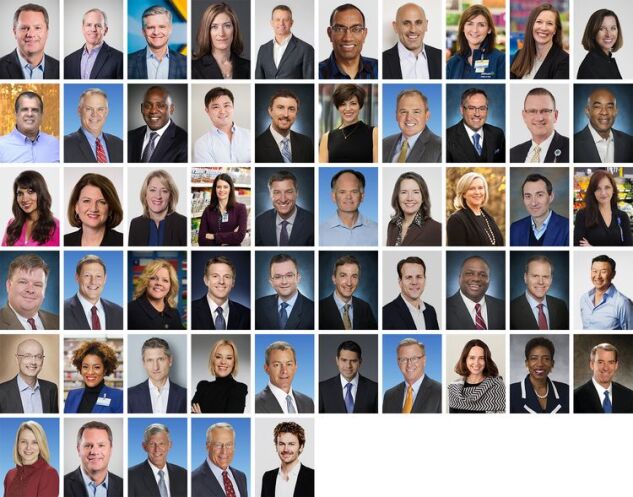 Walmart’s executive management and board of directors.
Source: Walmart

What happened inside Walmart offers a lesson for other companies trying to diversify their management ranks. As the nation’s biggest private employer, Walmart sets a standard with its workforce policies that other big employers typically follow. The retailer also has held itself up as a leader this year by making one of the largest corporate commitments to battling racial inequality, with a $100 million pledge.

isn’t the only retailer with a poor track record on race: At Target Corp., its cheap-chic rival, only three of the top 54 executives are Black. Costco had no Black senior executives as of 2018, according to the most recent data available, and the leadership team at electronics retailer Best Buy Co. is also dominated by White faces. Elevating women while neglecting Black employees’ career advancement is also endemic across much of U.S. industry, including on corporate boards, where White women have made in recent years while racial minorities have lagged behind.

Black workers say they recall being aggressively recruited to join Walmart, then quickly realizing once they arrived that they weren’t part of the predominantly White informal networks—based on local university and church affiliations—that supply a disproportionate share of Walmart’s top leaders. Over the years, Walmart has often sought advice from noted Black leaders such as the Reverend Al Sharpton, but failed to listen closely enough to those in its own ranks. 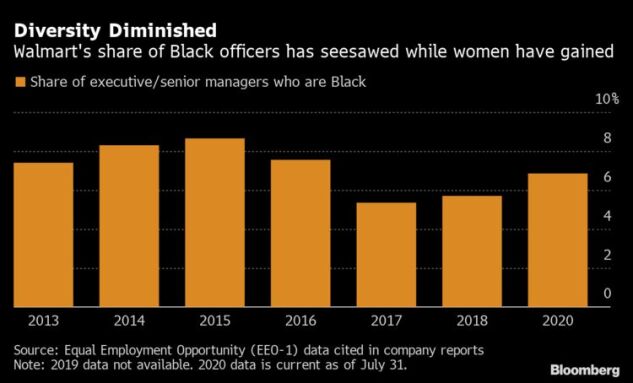 For those reasons and others, from 2015 until the middle of this year, the share of Black people in officer roles declined from 8.7% to 6.9%, in a 1.5 million-strong Walmart U.S. workforce that now is 21% Black. Their share of middle-management jobs hasn’t budged in five years, according to Walmart. (A Bloomberg request for data going back to 2005, when Walmart first began disclosing diversity figures to the Equal Employment Opportunity Commission, was denied due to a lack of “bandwidth.”) 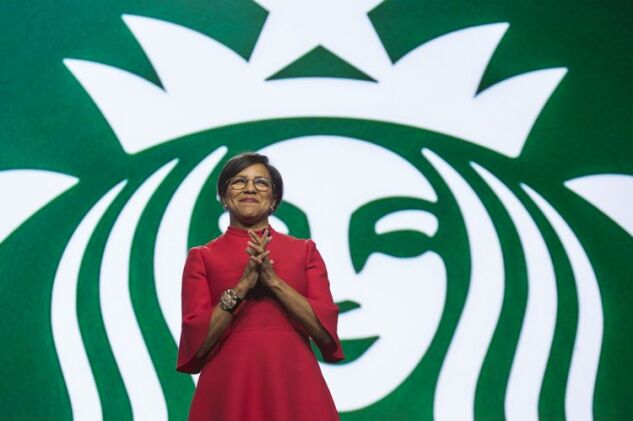 Walmart’s Chief People Officer Donna Morris denies that the gains made by women came at the expense of Black staffers, but acknowledged that the company’s efforts to identify and promote talented minorities needs to improve. A few have risen recently, like Dacona Smith, now COO of the U.S. business.

But many of Walmart’s promising Black leaders have left to lead other organizations: , who once ran the company’s Sam’s Club warehouse division, is now the chief operating officer of Starbucks Corp. and sits on the board of Walmart arch-rival Amazon.com Inc. , a logistics expert and onetime COO of Sam’s Club, now oversees the supply chain for home-improvement retailer Lowe’s Cos. , a former executive vice president and treasurer, now leads the nation’s biggest food bank. , once the chief financial officer of the U.S. business, left to be the finance chief of Olive Garden parent Darden Restaurants Inc. before returning to the retail sector., Walmart’s former head of legal operations, is now the top lawyer for the American Red Cross.

Walmart’s shortchanging of Black managers, however unintentional, is jarring in light of its recent $100 million plan in the wake of George Floyd’s killing to create a center on racial equity, which promises to “use the power of Walmart” to find ways to address systemic racism. CEO , in announcing the pledge, said the company also needed to “actively shape our culture to be more inclusive” and warned that managers who didn’t promote diversity would need to find work elsewhere.

“Words and feelings matter but they are not enough,” said McMillon, who also is chairman of Business Roundtable, giving him one of the loudest bullhorns in corporate America. “More action is required.” 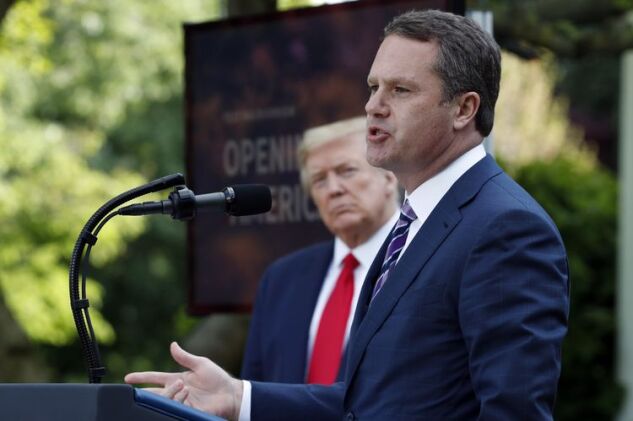 Walmart has taken some action already. It has promised to post all job openings at the vice-president level and below internally first, to encourage in-house candidates. It will also release its diversity and inclusion statistics twice a year rather than annually.

“I want Walmart to be known for its people practices,” said Morris, who joined the company in February from Adobe Inc. “I’m not sure if we are now.”

Walmart, in its campaign to elevate women, isn’t the first big company to experience unintended fallout from a well-intentioned diversity initiative. Research on why these efforts fail has become a cottage industry in academia.

For starters, such initiatives often are reactive—a response to high-profile litigation, as in Walmart’s case, or fear of embarrassing revelations. Second, the programs themselves force-feed diversity to reluctant managers, according to a 2016 Harvard Business Review article, which can “activate bias rather than stamp it out.” The authors, Frank Dobbin and Alexandra Kalev, analyzed 816 U.S. companies and found that popular interventions such as mandatory diversity training and grievance systems actually made those businesses less diverse over five years.

“You won’t get managers on board by blaming and shaming them with rules and reeducation,” Dobbin and Kalev wrote. “People often respond to compulsory courses with anger and resistance—and many participants actually report more animosity toward other groups afterward.”

Walmart’s error was channeling its firepower to fix one glaring problem in response to the gender discrimination suit, then failing to do the same for its 340,000 Black U.S. employees, a population nearly the size of Cleveland. Such tunnel vision is common, according to experts in the field. 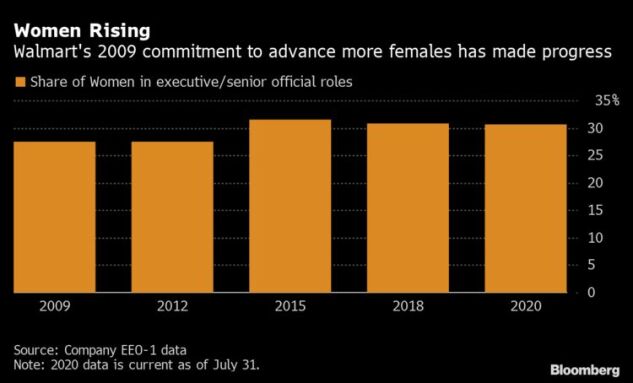 “They go all in on some aspect of diversity,” says Steve Bucherati, the former chief diversity officer at Coca-Cola Co., “and take their eye off the ball when it comes to the broader aspects of the work.”

While organizations spend billions of dollars every year on diversity programs, consultants and conferences, the problem persists, especially for Black managers.

Meanwhile, women have enjoyed gains over that same period, as they have at Walmart. Women now hold almost a third of executive roles, up from 27% when Duke made his commitment in 2009.

But most of the women are White, including the four who report directly to the CEO. There are no Black women or men in those high-profile roles, which lead to the top slot. Walmart has just one Black director, down from two a decade ago.

Walmart’s focus on women is apparent from the infrastructure it has to support them. Along with the global council that Duke launched 11 years ago—which has morphed into a broader “inclusion” council—there’s the Women’s Resource Community, a Women’s Officer Caucus, and a Women in Retail Field Development Program for those outside the U.S.

Much of this was an outgrowth of some advice Walmart got from another big company, Coke. In 2000, the beverage giant settled a claiming widespread racial discrimination in pay and promotions, and thereafter became a model for diversity. Leaders in Walmart’s human-resources department contacted Bucherati, who designed Coke’s diversity initiatives in the wake of the settlement. He had created a global women’s council at Coke, and Walmart asked for his assistance as it developed one of its own.

In contrast, there are fewer groups inside Walmart that specifically focus on the development of Black employees.

That’s not to say Walmart doesn’t want to hear from them: In 2018 McMillon led a two-day “immersive listening tour” of Montgomery, Alabama, where he and other leaders visited sites made famous by the civil-rights movement. Last year he screened “The Hate U Give” multiple times for Walmart employees, and invited the movie’s director George Tillman Jr. for a town hall conversation.

And in the wake of George Floyd’s death, Walmart said it would hold “associate listening sessions” where rank-and-file employees can tell senior leaders “how you’re feeling,” according to an internal memo from Morris.

That’s not enough, says Pamela Newkirk, author of “Diversity, Inc.: The Failed Promise of a Billion-Dollar Business,” which explains why corporate diversity efforts haven’t really accomplished much. “OK, you are listening now,” she says. “But what are you hearing and what will you do with the information?”

Some parts of Walmart have done well by Black employees, at least for a while. Its legal department during the 2000s recruited Black and Latino lawyers under the guidance of then-General Counsel Tom Mars. But the progress fizzled when a new general counsel took over in 2009, the same year Duke began his women’s initiative, according to people who worked there at the time. 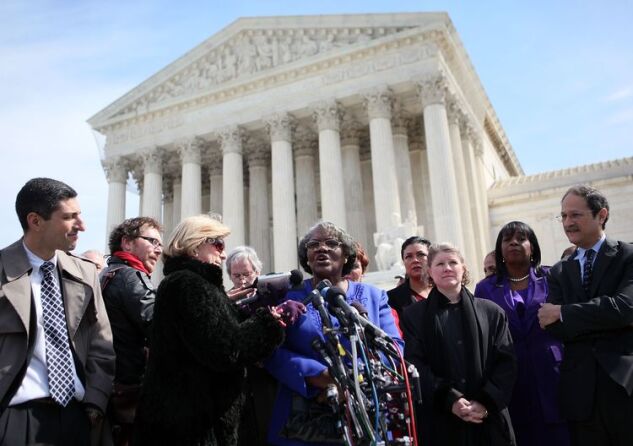 Betty Dukes (center), one of the six named plaintiffs in the Dukes v. Wal-Mart case, speaks to the media in front of the U.S. Supreme Court in 2011.
Photographer: Alex Wong/Getty Images

Walmart’s uneven progress on diversity didn’t get much attention before. Now, though, the stakes are higher, as the Black Lives Matter movement gains a foothold in the corporate mainstream. Signs of change are palpable, even in Walmart’s hometown: The statue of a Confederate soldier in Bentonville’s City Square, which faced the Walmart Museum, was hauled away to a less prominent location earlier this month. The town celebrated for the first time this year. “Whatever is happening in the U.S., is happening to us,” Morris says.

Walmart says it will accelerate its outreach toward all minorities. But Duke said the same thing in 2009, as did McMillon when he became CEO in 2014. CEOs often talk about moving faster on diversity, but where to? How do you convince those employees who are unwilling to act? And how do you create an environment where minorities can speak up without fear of retribution?

These are the questions Walmart now has to ask itself.

To contact the author of this story:
in New York at mboyle20@bloomberg.net

To contact the editor responsible for this story:
at jgreiff@bloomberg.net