The TikTok logo sits displayed on a smartphone in this arranged photograph in London on Aug. 3.
Photographer: Hollie Adams/Bloomberg

has teamed up with in a joint bid to acquire TikTok, a surprise move that signals the retail giant’s desire to become a force in technology and media and reach younger shoppers.

Walmart said in an emailed statement that the move could help grow its third-party online marketplace unit along with its nascent advertising arm, two areas that Chief Executive Officer has said he’d like to expand. The two companies already work together, as Walmart uses Microsoft’s Azure cloud platform across the entire company.

Walmart’s shares jumped as much as 3.6% to $135.47 in New York following news of the joint pursuit of TikTok, the biggest intraday gain since July 7. 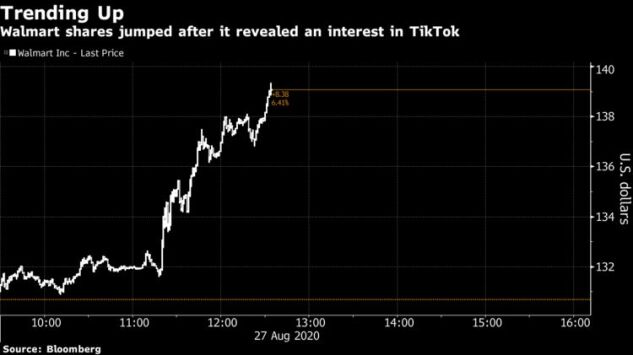 Microsoft has been in discussions for weeks to buy TikTok’s business in the U.S., Canada, Australia and New Zealand. Other companies have also emerged as potential bidders, including Oracle Corp. and Twitter Inc. It’s unclear how far those discussions have gone. Microsoft is the only company to publicly confirm acquisition talks.

Walmart’s interest in the popular app shows how serious McMillon is about moving the world’s biggest retailer into the faster-growing arena of media and online content. It has partnered, and bought a stake in, Israeli video-production company Eko, which has developed things like interactive toy catalogs for Walmart.

Other moves have failed, though: Walmart sold it video-streaming service Vudu earlier this year, as the business had been leapfrogged by subscription services like Netflix and Hulu.

TikTok, owned by China-based ByteDance Ltd., is fielding interest in its operations in the U.S. and a handful of other countries. President Donald Trump recently ordered ByteDance to sell TikTok’s U.S. assets within 90 days.

To contact the reporter on this story:
in New York at mboyle20@bloomberg.net