Perennial top dealmakers Wachtell Lipton Rosen & Katz and Kirkland & Ellis led the M&A pack by handling the highest deal volume as principal legal advisers during a busy first quarter of 2021, building off the momentum from the end of last year.

Global M&A activity reached $1.1 trillion in the first three months of 2021, a 52.8% increase over the same period last year that was driven in part by a special purpose acquisition company boom. M&A activity ground to a near standstill in the first quarter of last year as the coronavirus pandemic spread.

The new figures mark the best start of the year for deal making since at least 1998, according to data compiledby Bloomberg. The outlook for the rest of the year is similarly sunny, giving Big Law’s transactional lawyers reason for optimism, especially after a mixed 2020 that was characterized by M&A lawyers as “a tale of two halves.”

“Interest rates are going to be low, there’s likely going to be a lot of government spending, and the consumer has come back,” said Stephen Arcano, an M&A partner and global head of Skadden Arps Slate Meagher & Flom’s transactions practices.

“I think that’s the kind of environment where you could see an extended period of strong M&A activity,” he added.

The pandemic and its ensuing economic slowdown halted many deals in the early part of 2020, Market activity began to rebound in the third quarter, buoyed by strong performances in the technology and life sciences sectors.

“When the market started to pick back up after the initial months of Covid, the deals were really focused on the work-from-home plays, technology, and healthcare and there was too much uncertainty in the rest of the economy for there to be a ton of activity there,” said Kirkland M&A partner Edward Lee.

While technology and software are still front and center, interest in M&A has expanded to include traditional industrial sectors and the consumer sector, according to Lee, who joined Kirkland in a rare lateral exit from Wachtell last spring.

“They’ve now adjusted to what the world looks like today in 2021 and businesses are feeling like they have a better line of sight into what the next year or two might look like and what broader changes might be in store that they need to position themselves for,” Lee said.

Wachtell worked on the highest dollar amount of global deals as principal advisers in the first quarter of 2021, according to newly released M&A advisory legal tables from Bloomberg. As principal, the firm worked on 24 deals worth $110.4 billion, including Kansas City Southern’s proposed merger with Canadian Pacific Railway worth roughly $29 billion. 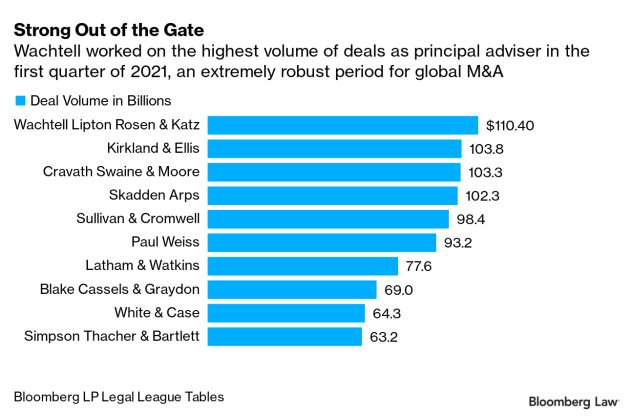 “Coming into this year there was a huge backlog and good momentum,” said Kirkland & Ellis M&A partner Daniel Wolf.

“Every part of our practice and I think every sector of the market is hitting at the same time which doesn’t always happen,” he said. Wolf noted strong performances by Kirkland’s private equity, public company, and capital markets practices.

Cravath Swaine & Moore, Skadden, and Sullivan & Cromwell rounded out the top five law firms in deals by volume by principal adviser for the first three months of 2021. On the deal count side, Latham & Watkins came in second to Kirkland, advising on 143 deals, followed by White & Case, Jones Day, and Goodwin Procter.

Another 2020 trend that has continued to surge through the first quarter of this year is deal making by SPACs.

“The SPAC IPO and resulting M&A markets have been really, really busy throughout this quarter and just unbelievably so,” said Damien Zoubek, an M&A partner at Cravath.

The analysis showed four law firms — Latham, Kirkland, Skadden, and White & Case — have advised in the first quarter of 2021 on more than 20 pending or completed takeover deals by U.S.-listed SPAC acquirers that went public on or after January 1, 2019.

In examining the same grouping of pending or completed deals announced in the first quarter of 2021, Latham, Davis Polk & Wardwell, Kirkland, Skadden, and Weil Gotshal & Manges were among the top SPAC M&A legal advisers as ranked by market share. 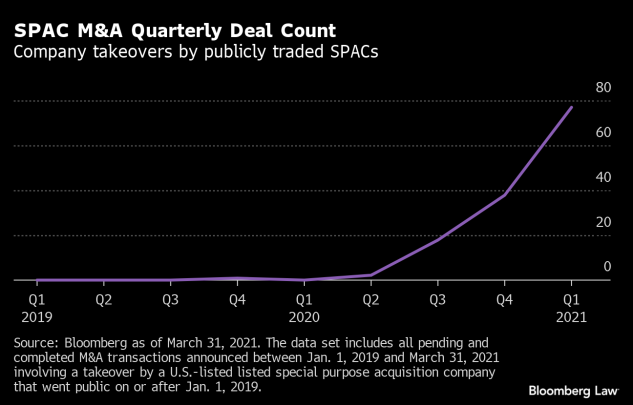 For some firms, that transactional volume could have impacted their league table rankings.

“Looking at the handful of firms that did a lot of the SPAC work, for some of them it boosted their numbers, but they were going to make it into their top spots anyway, like Latham and Kirkland,” said Grace Maral Burnett, Bloomberg Law legal analyst.

“But I think for a few firms like White & Case and Davis Polk, the SPAC numbers may have really made a difference for them in terms of their market share,” she added.

“A year ago, when we were having this conversation, we were not talking about SPAC M&A deals because they were barely even a rounding error at that point in time. So this is a huge change in the market,” said Diane Holt, Bloomberg Law analyst and former corporate transactions lawyer.

Big Law firms, and some smaller shops, have also made major cash advising SPACs in going public, which is distinct from the M&A or “de-SPAC” transaction that follows.

Dealmakers are starting to see some cooling down in the SPAC IPO market and a bit in the de-SPAC space, which isn’t surprising considering how hot the markets had become, according to Zoubek.

There are still questions about the long term future of the SPAC market, as well as unknowns in the regulatory landscape for deals, which may see shifts under the Biden administration. But deal lawyers said they’re confident that M&A’s current upward trajectory will continue through 2021 and beyond.

“My sense is we’re in a growth phase of the business cycle that forecasts suggest will likely continue for couple of years,” Arcano said.