Christopher McCleary was planning to spend the year supporting more than 600 American athletes headed to Tokyo this summer for the Olympics. Instead, the U.S. Olympic and Paralympic Committee’s general counsel and his lawyers are trying to renegotiate contracts and juggle other issues after the coronavirus pandemic pushed the games to 2021.

“There’s a whole set of logistical work around what we do to build our delegation to Tokyo, and then protect those people and get them there, and make sure the athletes can have the best experience they can and then get them home safely,” McCleary said. “We thought we knew what we were going to do, but all of that is in play.”

McCleary joined the USOPC, based in Colorado Springs, Colo., in 2015 as general counsel and ethics officer. He previously spent nearly two decades in various roles with San Francisco-based Visa, Inc., and its subsidiaries after starting his career as an associate with Brobeck, Phleger & Harrison.

He spoke with Bloomberg Law about how his narrowing of USOPC’s outside counsel panel helped lead to a roughly 30% decrease in overall legal spend earlier in his tenure, how the global pandemic has impacted the USOPC and his legal team, and the “magic” of the Olympic and Paralympic Games.

Bloomberg Law: The 2020 Tokyo Olympics have been postponed to next summer due to Covid-19, and it’s been reported that the USOPC might lose millions in revenue as a result. How has the pandemic affected your work?

Christopher McCleary: It’s very complex. There are some revenues that are just going to be eliminated, and then there are going to be some that are postponed, and they ride with the games. The scenario that we’re all hoping for now is a successful and fulsome Tokyo Olympic and Paralympic Games in 2021. Some of that money that we’re talking about should come to us in 2021, but I think all of us need to be prepared for a little bit of a different games in Tokyo, based on the ongoing pandemic and the economic impacts of all this stuff.

BL: Have you had to ask your outside firms for steeper discounts this year as a result of this revenue uncertainty?

CM: We have not done that. We’re pretty lean, both in-house and in the way we use outside counsel. Our budget is not the biggest one by any means in the organization, and so when we are in a moment like this, do you just go and ask for more discounts? I hate to do that to a firm that’s already doing good work for us with very good value. 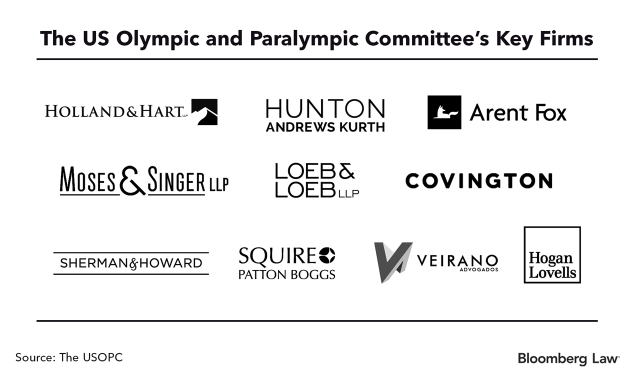 BL: Has the postponement caused any legal issues?

CM: Absolutely. Like everyone else in our organization, and like every sport organization, we’re facing all kinds of questions that I don’t think anybody foresaw. There are contracts that pertain to every bit of our revenue, philanthropy, broadcast revenue, sponsorship, revenue licensing revenue. One kind of legal work that has been spawned this year is endless negotiations and renegotiations of some of those agreements, their timing, and the terms under which we’ve had sponsors.

The business we’re in is ultimately supporting athletes, particularly as they get ready to go and compete in elite international competitions and Tokyo. There’s a whole set of logistical work around what we do to build our delegation to Tokyo, and then protect those people and get them there, and make sure the athletes can have the best experience they can and then get them home safely. We thought we knew what we were going to do, but all of that is in play.

BL: What’s the biggest difference between working in-house at a large corporation and a smaller, nonprofit like the USOPC?

CM: Every organization would say that they’re concerned about managing costs and getting efficiencies out of service. We had our eye on that at Visa too. But in a nonprofit, we are mission driven. We’re never going to make anyone rich. We’re not trying to make money for the sake of making money. And I don’t mean to say that’s a bad motivator for people to get up and go to work, but we’re not working to a quarterly number to pay shareholders where more and more is better. No, my mission is to support athletes.

Unless I can justify spending money on outside counsel because it’s going to help me support athletes, it’s a terrible waste. It’s not just that a waste of money is unforgivable because we’re a nonprofit, but we’re also a federally chartered organization. We are the Olympic and Paralympic Committee because of an act of Congress, which means that they gave us a kind of public trust. So if I have that trust, I’ve got to justify spending on admin overhead, and that includes outside counsel.

BL: How does this mindset affect your work with the USOPC’s outside counsel?

CM: When I came in, we narrowed the relationships we had with law firms from around three dozen to about a dozen deeper relationships—where only half a dozen do ongoing day-to-day work for us—and we in the firm became more important to each other. That helped us sharpen the relationships with these different firms. That was part of the reason that, by my second year with the USOPC, we were probably running at 30% lower overall legal spend.

As a nonprofit, we are very sensitive to value for service. Not just low fees, but a high value. We focused on those firms that really had the same kind of commitment to our mission that we do, so that really substantive partners in these accomplished firms wanted to spend time with us on our work. That leads to arrangements on fees and things too.

People come to a nonprofit like this not because they want to make more money—because nobody’s going to—and law firms need to kind of come with a similar spirit. Nonprofit is hardly ever going to be your biggest or most profitable client. There’s got to be something other than that that generates value for your firm.

BL: Do outside firms often give you discounts or alternative fee arrangements since you are a nonprofit?

CM: Different firms have different attitudes about working with us. Some charged us like every other client, some were trying to give us discounts as a nonprofit or because they liked being part of the movement. Some were giving us pro bono work on certain areas.

Now, we have a sort of bespoke discount arrangement with each firm based on the nature of the work they do for us, who they staff on our matters, and how much work we’re generating. So even if we don’t have any other alternative billing arrangement, there’s going to be a flat discount off their rack rates.

BL: Why are you so dedicated to the Olympics and this mission of supporting athletes?

CM: It sounds like I drank the Kool Aid, but that little bit of magic that goes with the Olympics and the Paralympics is no joke. That moment where you see people of similar achievement and commitment connect across cultures, that really is magic.