Vinson & Elkins’ new four-member executive committee is navigating two major transitions at once: from traditional oil and gas work to renewable energy, and from a major Texas firm to a national player.

Energy has been central to the firm since its Houston founding in 1917 during an oil boom. Now it seeks to ride an alternative-fuel wave, exemplified by its investment last year in a four-partner renewable energy finance team from Wilson Sonsini Goodrich & Rosati.

Vinson & Elkins wants to grow headcount to 1,000 lawyers from around 700 now and seeks to increasingly compete with larger rivals. It’s eyeing growth in New York, Washington, California, and London.

“We really have the infrastructure in place to run a law firm that’s a third bigger,” said Keith Fullenweider, a Houston private equity partner who took the firm’s chair position at the start of the year. “The real key is driving the demand on the client side and making that happen.”

In a wide-ranging interview with Bloomberg Law’s editorial board, Fullenweider and executive committee members Hilary Preston and Michael Holmes also spoke about the current tight market for Big Law lawyers; their plans to improve diverse staffing on client matters; and how the legal market in Texas has changed with an influx of out-of-town competitors.

Vinson & Elkins is coming off a strong 2021, growing revenue more than 16% to $912 million while increasing profits per equity partner 19% to $3.5 million, according to an AmLaw report.

Vinson & Elkins’ energy practice has led all law firms by the value and number of energy industry M&A deals it advised in North America over the past decade, according to data compiled by Bloomberg.

The firm worked on more than 385 deals valued at nearly $585 billion over that period. That’s more than its closest competitors by more than 130 deals and $165 billion, the data show. 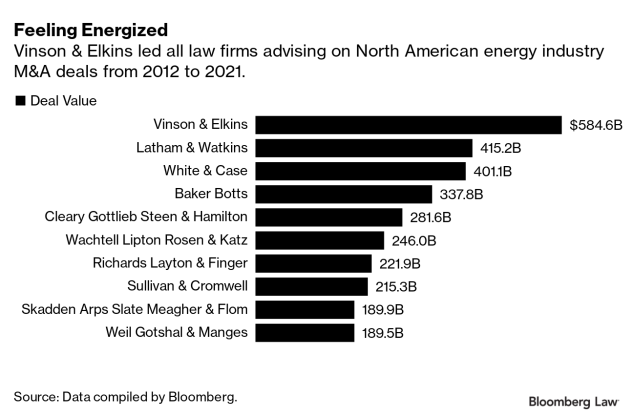 But the market has grown more competitive as top firms like Latham & Watkins, Kirkland & Ellis, Sidley Austin and others have widened their Texas operations to take a slice of that lucrative deal work.

The global energy market is also shifting, with billions of dollars in investments pouring into renewable projects. There is an “urgency” among governments and investors to move to new energy sources, Fullenweider said, though the “vast” traditional sector will need support during the transition.

Preston—a litigator who splits her time between New York and Austin, Texas—said new energy sources will also drive litigation and intellectual property work. She pointed to disputes such as ownership battles over lithium ion battery technology.

“Those are going to be very significant fights,” Preston said. “On the M&A and transactional side, and on the litigation side, we’re trying to help our clients think through both ways of navigating those issues.”

Fullenweider said the firm has no people in Russia or Ukraine, and no significant project work in either country. It’s too early to tell how the Russian invasion of Ukraine will impact law firms, he said, noting that clients in debt and equity markets are “pretty antsy” about the situation.

Vinson & Elkins ranks just outside the 50 largest law firms by revenue. That elite group has significantly outperformed its smaller peers in recent years, and that’s one major reason many managing partners want to get bigger.

“Our firm needs to grow,” Fullenweider said. “It’s simply scale. It’s not excellence. It’s not geographic reach. It’s not the number of practices.”

His executive group, which also includes New York-based corporate partner Jim Fox, took over from a two-member team that ran the firm for a decade, the maximum tenure for firm leaders.

Growing headcount to 1,000 lawyers, Fullenweider said, can be accomplished in significantly less time than the 10 years they could be at the helm. The firm wants to grow both revenue and profitability, he said.

Adding significant numbers of lawyers would be a reversal from the past decade, when headcount at Vinson & Elkins was stagnant. The firm had more than 700 lawyers in 2011, when revenue was roughly $600 million, according to AmLaw data.

Big Law is experiencing record attrition amid burgeoning workloads over the past two years. Vinson & Elkins said it had added a net of about 30 associates during a time when attrition has been reported as high as one in four leaving last year.

A host of law firms have opened offices in Austin in recent months, mimicking the outside entrants that piled into Houston starting around a decade ago. In Houston’s transactions market, Fullenweider noted the firm competes for client matters with some of the world’s top dealmakers: Latham & Watkins, Kirkland & Austin, Simpson Thacher & Bartlett, and Sidley Austin.

Some of the new Austin offices have opened with the express purpose of hiring top lawyers from the University of Texas law school, to which Vinson & Elkins gave $1 million this year to help boost its number of diverse students.

“Over the last decade there’s been no way to sort of sit back and be comfortable when you see some of the world’s best law firms trying to come to town and the supply of excellent lawyers in Texas hasn’t suddenly changed,” Fullenweider said.

The firm said it maintains the top pay scale for associates, which has been spiraling ever higher over the past two years. It announced that it is matching the new pay scale set by Cravath Swaine & Moore, which tops out at $415,000 for the most senior associates.

But Preston said compensation alone isn’t enough to keep associates in today’s environment. She said the firm stresses offering opportunities to young lawyers and helping them build relationships inside the firm.

“There’s no doubt there’s more competition,” said Holmes, the firm’s Dallas-based vice chair. “But I think we feel like we’re in a really good spot from the recruiting standpoint.”

Firm leaders said they are planning to invest in administrative roles to help diverse associates get mentoring and staffing opportunities. Vinson & Elkins in November hired Hy Pomerance from Cleary Gottlieb to serve as its new chief talent officer.

It’s not clear how many staff positions the firm intends to fill, what specific job responsibilities the roles will entail, or to whom those selected for the jobs will report.

If someone’s not getting the right mix of experience, Preston said, the program will be a “built-in system for correcting that.” It will likely stop short of something as rigid as a “work assignment coordinator” system, she said.

The firm has had success recruiting diverse associates, Fullenweider said, but “we certainly think we have more work to do” when it comes to “advancement through the associate ranks and promotion to partnership.”

Law firms have struggled to retain diverse lawyers, and the number of Black partners in law firms is just over 2% nationally, according to the National Association for Law Placement. One frequently cited issue has been that partners often hand work to people who look like them—creating fewer opportunities for diverse attorneys.

“Nobody intends for it not to go well, but there’ve been too many examples where it has not gone well,” Fullenweider said of distributing work equitably. “And so we’ve made the policy decision that we’re going have to take a more interventionist or active approach in that.”