A Postmates sticker is displayed on the window of a restaurant on July 06, 2020 in San Francisco, Calif. Uber announced plans to buy the restaurant delivery company Postmates.
Photographer: Justin Sullivan/Getty Images

Neither nor are profitable. They’re hoping that a combination of the two businesses will somehow get them there.

Uber said Monday it will spend $2.65 billion for the San Francisco-based food delivery company Postmates. The all-stock transaction is a bid to accelerate a path to profitability set by Uber Chief Executive Officer and deliver growth rates once typical of Uber’s ride-hailing operation. Both aspects of that strategy rely on food delivery, which has gotten a boost from the coronavirus pandemic.

The deal is a relatively modest outcome for Postmates, a pioneer of the gig economy that was outmaneuvered by deep-pocketed competitors. The privately held company had been at $2.4 billion in an investment last year, a person with knowledge of the matter said at the time. 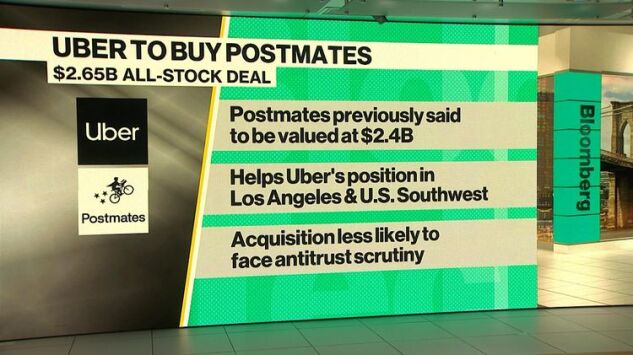 For Uber, the purchase comes at a reasonable price and could help lead to a rational—and perhaps someday, profitable—market, said Benjamin Black, an analyst at Evercore ISI. “You had four players who were very aggressive on price and were essentially giving away food for free,” said Black. “Rational pricing will start to kick in after consolidation.”

Uber estimates that it will issue about 84 million shares of common stock for 100% of the fully diluted equity of Postmates, the company said in a Monday. Shares of Uber rose about 5% during trading Monday.

Since the start of the pandemic, Uber has cut more than a quarter of its staff and exited or pared back some businesses, such as electric bikes and financial services, so it could focus on core areas: ride-hailing and food delivery. Growth in Uber’s core rides business was slowing even before the pandemic drove a first ever decline in bookings in the first quarter. Global rides plummeted 70%, Khosrowshahi in June.

Uber Eats has been a bright spot for the company as stay-at-home orders and restaurant closures have prompted more customers to order in. Food-delivery bookings more than doubled for Uber in the second quarter and rose about 67% for Postmates, Khosrowshahi said in the statement Monday.

The company sees advantages from the Postmates deal beyond meal delivery. Postmates was a pioneer in so-called delivery-as-a-service, complementing Uber’s efforts in shuttling groceries, essentials and other goods, the company said. Restaurants and other retailers will benefit from tools and technology to connect with a bigger customer base, according to the statement.

“Platforms like ours can power much more than just food delivery—they can be a hugely important part of local commerce and communities, all the more important during crises like Covid-19,” Khosrowshahi said.

Postmates wasn’t Uber’s first choice. A proposed acquisition of Grubhub fell through last month when European rival Just Eat Takeaway.com NV bought it instead for $7.3 billion. Uber’s bid for Grubhub, one of the larger players in the U.S. food delivery market, was likely to have , according to industry analysts. The two together would have controlled more than half the U.S. market.

An acquisition of Postmates is less likely to raise regulatory scrutiny because it wouldn’t change the market as much. Postmates, a distant fourth, would give Uber a firm lead over Grubhub, but the combined company would still trail SoftBank-backed , the nationwide leader. Postmates would strengthen Uber’s position in Los Angeles and the American Southwest, two markets where the brand is strongest.

Still, the deal has drawn some criticism. “Uber and Postmates’s business model is built on the exploitation of restaurants, workers, and consumers,” said Sarah Miller, executive director of the anti-monopoly group American Economic Liberties Project. “The Federal Trade Commission should refuse to rubber stamp this power grab.”

Uber executives have been vocal for months about wanting to drive consolidation in the food delivery market. JPMorgan Chase & Co. was the financial adviser to Postmates, and Latham & Watkins LLP was its legal counsel. Uber’s legal counsel was Wachtell, Lipton, Rosen & Katz.

The acquisition of Postmates is expected to close in the first quarter of 2021, pending regulatory approval, Uber said. , the head of Uber’s food-delivery business, is expected to remain in that role, a person with knowledge of the plan said Sunday night. Under , Postmates co-founder and his team will stay on to manage the Postmates service, said another person, both of whom asked not to be identified discussing a private deal.

In its statement, Uber said it plans to keep the Postmates app running separately, supported by a more efficient, combined merchant and delivery network.

(Updates with profit context in the sixth paragraph.)

To contact the reporters on this story:
in San Francisco at lchapman19@bloomberg.net;
in Portland at mtobin37@bloomberg.net