The Commerce Department said Friday it would require licenses before allowing U.S. technology to be used by the Chinese tech company or its 114 subsidiaries, including it chip-design unit .

The move is designed to inhibit Huawei from producing and designing its own chips, a senior department official said. U.S. officials accuse Huawei of being a security threat tied to the Beijing government, an allegation the company denies.

“We must amend our rules exploited by Huawei and HiSilicon and prevent U.S. technologies from enabling malign activities contrary to U.S. national security and foreign policy interests,” Commerce Secretary Wilbur Ross said in .

The new rules require any foreign chipmaker that uses American gear to get a license before they can sell to companies on a U.S. blacklist, a roster that includes Huawei and other prominent Chinese tech giants such as and

The restrictions may constrain the entire contract chipmaking industry because it uses equipment from U.S. vendors , and in wafer fabrication plants. It steps up an ongoing White House campaign to contain Chinese technology giants viewed as a threat to national security, particularly Huawei -- the company at the heart of a global fifth-generation network rollout and Beijing’s Made in China 2025 effort to lead the development of future technologies.

All global chipmakers, including TSMC and China’s own , need gear from U.S.-based companies to fabricate chips for everything from smartphones to supercomputers. But the latest measure affects TSMC disproportionately because it counts on Huawei for about 10% of its revenue, according to Bloomberg’s supply chain estimates.

“We are following the U.S. export rule change closely,” TSMC said in a statement. “The semiconductor industry supply chain is extremely complex, and is served by a broad collection of international suppliers. As part of the global semiconductor ecosystem, TSMC maintains long-term collaborations with equipment partners around the world including those located in the United States.”

China and Huawei have threatened retaliation should the U.S. enact further measures to constrain the country’s largest tech company. On Friday, the -- a Chinese tabloid run by the flagship newspaper of the Communist Party -- that Beijing stood ready to initiate a series of countermeasures without elaborating.

“This will have a very substantial impact on Huawei’s ability to manufacture chips both in its smartphones as well as in its base stations, which make up 85 or 90% of its overall revenue,” said Beijing-based Gavekal Dragonomics analyst Dan Wang. “There’s quite a big possibility that these rules will cut off almost 90% of its revenue.”

Last year, citing those concerns, the U.S. put Huawei on an “Entity List,” requiring U.S. companies to obtain a special license to sell products to the Chinese company. The move has largely frozen Huawei out of getting some of the computer chips it needs to make equipment integral to new high-speed wireless networks.

Huawei continued to use U.S. software and technology to design semiconductors by their production in overseas facilities using U.S. equipment, said in a statement Friday.

A Huawei representative said the company had no immediate comment.

Materials in production today will get a 120 day grace period to not interrupt business continuity, a senior U.S. Commerce Department official said.

A senior State Department official said the action doesn’t mean all licenses will be denied.

More U.S. restrictions could inflict further damage on Huawei. The Shenzhen-based company in April growth had all but evaporated in the first quarter, after the Covid-19 pandemic wiped out demand for the gadgets that drive its revenue. Huawei’s is capable of crafting cutting-edge semiconductors that power its mobile devices and base stations, a key part of 5G infrastructure, but it depends on TSMC for production. Huawei may able to source some of its lower-end chip orders back to local foundry Semiconductor Manufacturing International Corp., but has no recourse in the advanced processors for which TSMC was the sole manufacturer. 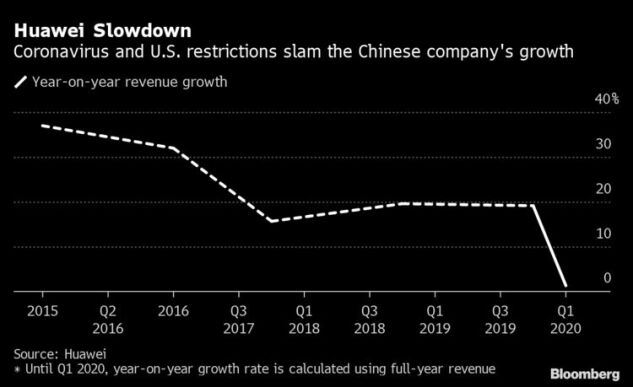 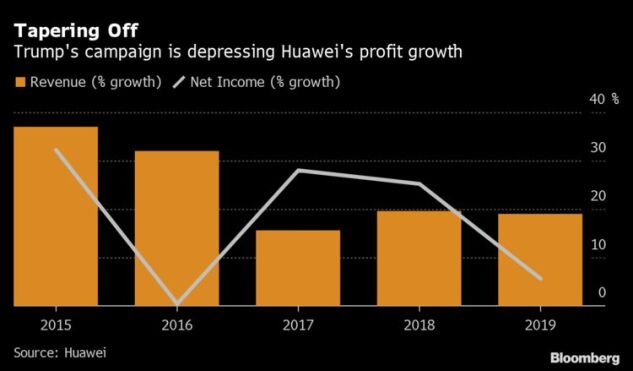 (Updates with details from U.S. briefing beginning in second paragraph.)

To contact the reporters on this story:
in Taipei at dwu278@bloomberg.net;
in Washington at tshields3@bloomberg.net