President said he briefly put on a face mask during a tour of a Honeywell International Inc. mask factory on Tuesday, out of sight of cameras -- until the company’s leader told him he didn’t need it.

Trump declined to wear a mask during a tour of the Phoenix plant, despite signs inside the facility reminding visitors that they should wear the face coverings. Some public health experts say that Trump’s refusal to wear a mask undermines federal recommendations that Americans cover their faces in public to combat the coronavirus outbreak. 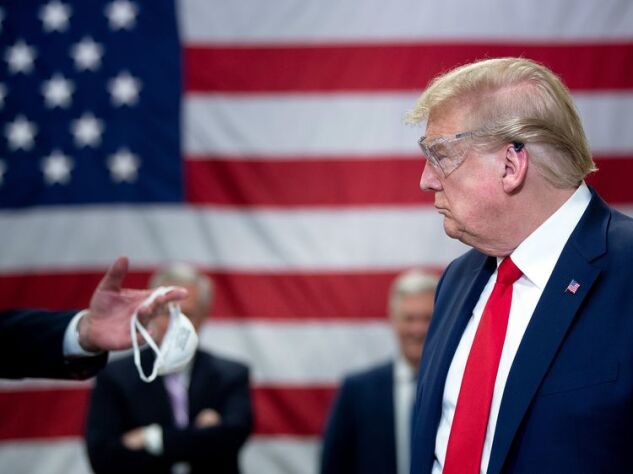 But on Wednesday, Trump told reporters that he “put on a mask for a period of time” before asking a person he identified as the head of Honeywell whether he needed it. Trump said he was told no.

He said he didn’t have the mask on long and only wore it “backstage,” after a reporter asked.

Some of the company’s employees and Trump’s staff also didn’t wear masks, while most members of an audience gathered for the president’s remarks had face coverings, including reporters.

“Following White House recommended protocol, a small number of individuals directly interfacing with the president on Tuesday were tested for COVID-19 immediately prior to the event, received negative test results and were permitted to not wear masks during portions of the visit based on that medical screening,” Honeywell spokesman Eric Krantz said in an email.

“All others present were wearing masks and social distancing in accordance with Honeywell’s site policy,” he said.

Krantz was not able to immediately say whether , the company’s chief executive officer, chairman and president, had told Trump he didn’t need one.

To contact the reporters on this story:
in Washington at jfabian6@bloomberg.net;
in Dallas at tblack@bloomberg.net