Women lead the blockchain practice groups in more than a half-dozen leading law firms, including Goodwin Procter, Morrison & Foerster, and McDermott Will & Emery.

That number could grow as newer female lawyers, including associates moving up the ranks, take interest in the burgeoning blockchain field.

Blockchain and cryptocurrency is still male-dominated, women lawyers say—which has sparked concerns about “boys’ club"-type behaviors, such as throwing industry conferences at strip clubs, for example. But the emergence of these technologies has given women a new opportunity to shine in Big Law, a chance many did not have in tech booms of decades past.

The world is different for women at law firms than it was during the Internet boom and dotcom bubble, when male lawyers were at the helm of the significant majority of tech-related law firm practice groups, said Judith Rinearson, who co-leads K&L Gates’s blockchain practice group.

“We’re not about to wait for someone to tell us, it’s okay to come on in,” said Rinearson. When we saw blockchain coming down the pike, we jumped on it.”

Blockchain allows digital information to be distributed but not copied through the use of cryptography in decentralized and difficult to hack digital ledgers.

The technology was originally designed to serve as a ledger for Bitcoin and other digital currency transactions, but food suppliers, drug makers and other corporations have since adopted it for a variety of uses, including as digital supply chains that have unchangeable audit trails.

The lawyers then began asking themselves who the leader in the field was at their firm, concluding more often than not that the role was “open,” said Gitlitz, who is also a co-founder of the New York-based nonprofit group Diversity in Blockchain.

One reason for the ascendance of women attorneys in the field, several said, is simple: There are more women attorneys at Big Law firms than in the past—and more of them are eager to lead.

“Having women lead in a field where you have critical mass is vitally important,” said Joshua Klayman, U.S. head of fintech and head of blockchain and digital assets for Linklaters. “It inspires others, and can show them, ‘You can learn this. You can do this.’”

“There are more seats at the table,” she said, “but now, there are also more tables.”

Lilya Tessler, head of Sidley Austin’s FinTech and Blockchain group, said in an email interview that another driver of women’s leadership in this space is a new type of client.

“We also have a new client base emerging of young entrepreneurs who do not have established relationships with certain lawyers or law firms,” said Tessler.

“They value diverse perspectives,” which she said provides opportunities for women attorneys to be their primary relationship at the firm and win their business. 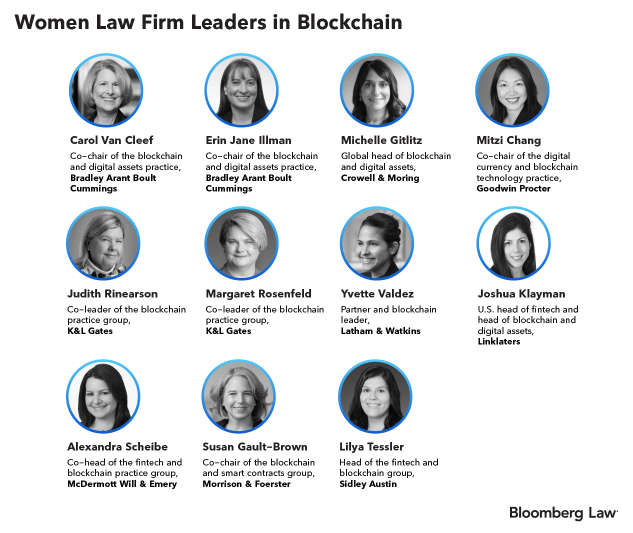 The blockchain and crypto industries are still no doubt male dominated. A boys’ club atmosphere can ensue, like in 2018 when, according to Bloomberg News, women in the industry criticized a bitcoin conference for holding a networking session at a Miami strip club.

Yvette Valdez, a Latham & Watkins partner in New York and a blockchain leader at the firm, said her blockchain and cryptocurrency practice currently includes one female blockchain CEO as a client, against the backdrop of many more male client CEOs of blockchain or crypto companies.

That said, Valdez notes that there are many more women in these companies “really doing what they can” to build them, including some who hold senior roles such as general counsel.

Along with Diversity in Blockchain, another group called Collective Future also advocates for global diversity in the fields of blockchain and cryptoassets. One of the founders was Carol Van Cleef, co-chair of Bradley Arant Boult Cummings’s blockchain and digital assets practice along with another woman at the firm, partner Erin Jane Illman.

A recent report from Diversity in Blockchain found that women and people of color have been underrepresented in blockchain company leadership positions, and among blockchain conference speakers and university blockchain and cryptocurrency professors.

The flip side of the equation is that their minority status has led women blockchain attorneys to band together. “We’re all cross-promoting each other,” said Klayman.

More and more Big Law partners seem to want in, at least to gain an understanding of the technology and how it affects their practice. K&L Gates’ Rinearson said she’s led standing room only educational sessions on blockchain during recent partner retreats.

Blockchain’s range of corporate uses is growing, women blockchain practice leaders say because of the advent of “smart” supply chain contracts, which establish and manage digital agreements between parties, as well as through the use of billions of Internet of Things-connected devices.

“I’m busier now than I’ve ever been,” said Sarah Shtylman, a Silicon Valley-based counsel with Perkins Coie, which has one of the larger blockchain and digital currency practice groups.