Special purpose acquisition companies are no longer raising record levels of new cash, but that’s OK with Joel Rubinstein. The White & Case partner is optimistic the summer vacations many capital markets lawyers missed out on a year ago might return this August.

“The cadence has slowed in these transactions, which I think is healthy,” Rubinstein told Bloomberg Law. “The frenzy was really unsustainable.”

As SPACs’ popularity exploded last year, Big Law firms rushed into a market they’d historically avoided. But the number of new SPAC IPOs has slowed to a trickle in recent months, raising questions about whether these transactions will fuel revenue going forward or be remembered as a one-hit wonder.

The SPAC IPO boom peaked in February, when nearly 130 blank check companies hit public markets and raised more than $43 billion. But increased regulatory scrutiny led to a raft of SPAC financial restatements. There were only five SPAC IPOs in May and eight in June, according to data compiled by Bloomberg, levels that align closely with pre-2020 historic activity.

While the wave of SPAC IPOs seems to have gone out as fast as it came, some Big Law capital markets attorneys have moved on to the more lucrative, second step in the SPAC process—advising blank check companies in their go-public acquisitions, known as “de-SPACs.”

The mere option of a de-SPAC has created additional work on traditional IPOs, lawyers said, since private companies often pursue both tracks of going public simultaneously. As a result, the capital markets practice is developing new lingo: The “Quad Track.” Preparing a private company for an IPO or a strategic sale was considered a “dual track” process. SPACs became the third option, and direct listings are now considered a fourth.

“We have some quad tracks going on,” Gregg Noel, the head of Skadden’s West Coast capital markets practice, said in an interview. “The good part is people have choices as it relates to the type of liquidity event they are looking for.” 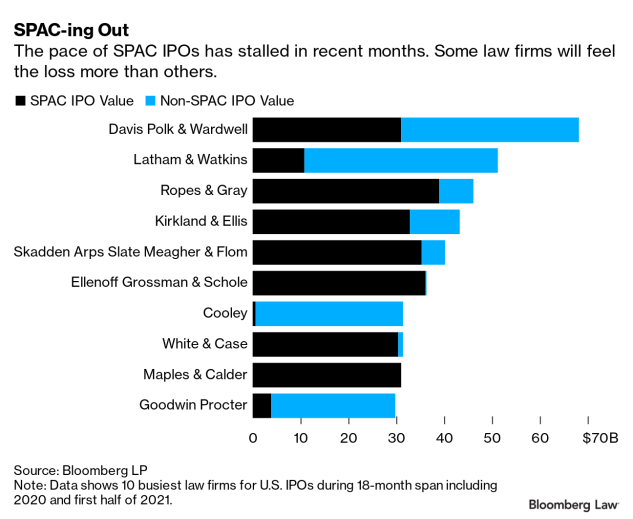 Capital markets lawyers have seen a series of products turn red hot since the start of the pandemic.

In the first half of 2020, lawyers helped companies load up on debt to fortify balance sheets during what they expected to be a prolonged recession. SPACs started raising record sums in the third quarter last year. And even with the decline in recent months, SPACs will raise a record amount this year thanks to the boom in the first quarter.

That activity spurred many Wall Street firms to huge revenue and profit growth last year. Davis Polk & Wardwell led the way on that score, with revenue spiking 22% to $1.77 billion and profits per equity partner soaring 40% to $6.35 million, according to the latest AmLaw data.

In recent months, the traditional IPO market has been on a tear, with Bloomberg reporting an all-time high of nearly $350 billion raised globally through the first six months of the year.

“You’re going to see it throughout the rest of this year, there is a really large backlog of companies that are going to be coming to market,” said Ian Schuman, global chair of Latham & Watkins’ capital markets practice. “The equity capital markets are so strong.” 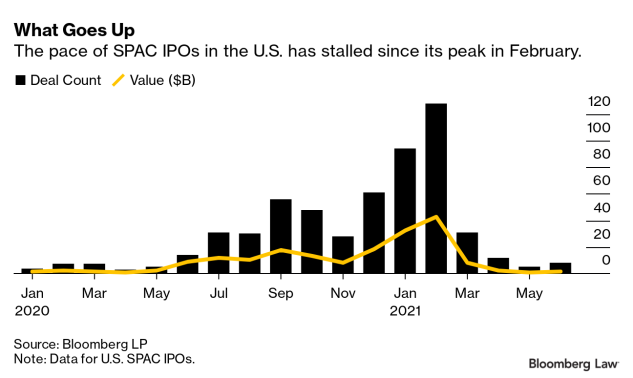 Big Law managing partners would gladly trade a slowdown in SPAC IPOs for a boom in the traditional route for going public, if only for one reason: The fees are much higher.

Simpson Thacher & Bartlett earned $6.5 million for its work advising dating app Bumble Inc. in one of the biggest IPOs this year, according to data compiled by Bloomberg. Working on one of the biggest SPAC IPOs, KKR Acquisition Holdings, Ropes & Gray earned $400,000, the data show.

“The capital markets across industries and across product areas continue to be at peak activity levels,” Richard Truesdell Jr., co-head of the capital markets practice at Davis Polk, said in an interview. “It is not as crazy as it had been at times when the pandemic began and at various points during the pandemic. We had some real peaks. But it is still very robust.”

Not all firms are missing the SPAC IPO work.

Cooley, a California-founded firm with a history representing technology and life sciences clients, chose to avoid the SPAC IPO boom, its capital markets co-chairs, Charlie Kim and Dave Peinsipp, said in an interview.

“We represent disruptive companies. We weren’t just taking every SPAC that was coming in during that period,” Kim said. “We think more about the de-SPAC piece. And that is where we are really active and our clients are looking to dual track.”

Others expect SPAC IPOs to rebound once the current round of blank check companies find merger partners. Given the regulatory scrutiny in the space, investors are likely to be more cautious with which SPAC sponsors they are willing to back, lawyers said. Part of the initial SPAC IPO craze was boosted by celebrity involvement including athlete-entrepreneurs Serena Williams and Alex Rodriguez, who have both backed individual SPACs.

“SPAC acquisitions will remain busy through the end of 2022 and SPAC IPOs should start to rebound further as the year progresses,” Douglas Ellenoff of Ellenoff Grossman & Schole, one of the earliest lawyers to represent SPACs, said in an email.

Paul Tropp, a co-head of Ropes & Gray’s capital markets group in New York, said it’s “a real question” whether lawyers will get their long-awaited August reprieve, given the active IPO market. Even if investors take vacations, Tropp said lawyers may be stuck at their workstations preparing for deals to launch on the heels of Labor Day.

“It could end up being another very busy end of summer,” he said.