Welcome back to the Big Law Business column on the changing legal marketplace written by me, Roy Strom. Today, we look at how much money law firms generate from company-side IPO work, and why it’s important for law firms to diversify their business models. Sign up to receive this column in your Inbox on Thursday mornings. Programming note: Big Law Business will be off next week.

Everybody knows it’s a bad year for corporate M&A and initial public offerings. What we don’t know is just how much that will bite into Big Law’s record financial success from last year. I’m going to try and put some numbers on it.

We’re usually left to extrapolate law firms’ financial results from the sheer volume of important work they handle. This week, Bloomberg Law reported that demand for two major Big Law “products” is on a sharp decline. Mergers and acquisitions are down 28.5% through three quarters, and initial public offerings are off by a whopping 90% from this time last year.

Law firm partners routinely insist that these kinds of steep drops don’t come with a one-to-one financial hit to their top line. They have plenty of work to stay busy, capital markets lawyers say, even if it’s not showing up as completed deals in the league tables.

I’m sure there’s truth in that. Lawyers do a lot of work for clients aside from closing major deals.

But a unique feature of IPOs allows us to quantify how the drop in those deals has hit law firms in their wallets. Newly public companies are required to tell the Securities and Exchange Commission how much they paid lawyers to help list their shares.

Those figures are a rough estimate, to be sure, as securities lawyers have told me over the years. They also only track one side of IPO deals: how much the company going public paid its lawyers. The disclosures don’t include how much banks that underwrite the deals pay their counsel, another lucrative part of the market.

With those caveats out of the way, let’s crunch some numbers.

A total of 724 US companies paid their lawyers $640 million for work on IPO registrations in the first three quarters of last year, according to data compiled by Bloomberg and an analysis by Bloomberg Law.

The drop-off this year is eye-watering: A mere 66 companies reported paying their lawyers $64 million.

The plummeting legal fees mark an end to a steady expansion of company-side IPO legal fees for US law firms. Fees had grown from $207 million in 2018 to $308 million in 2020 before more than doubling last year, amid a boom in IPOs and blank-check companies, which raise money through a publicly traded company that’s spent purchasing a private business. 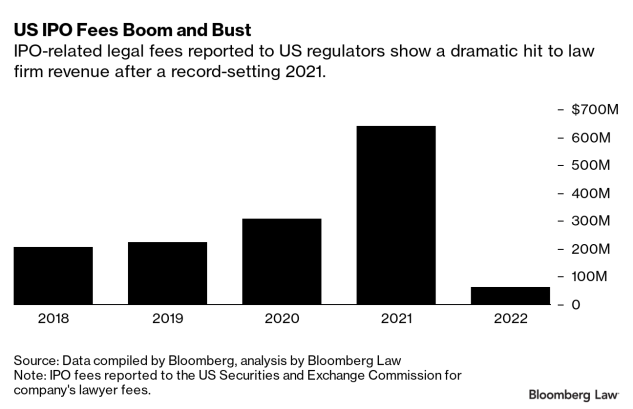 What does a $575 million decline in law firm revenue look like?

It’s about the same amount that Barnes & Thornburg, the 78th largest firm in the country, brought in last year.

Law firms, of course, rely on various revenue streams. Still, it’s tough not to wonder what the ramifications would be if a single firm handled all company-side IPO work.

Let’s call that hypothetical firm “Initial, Public and Offering LLP.” IPO LLP has $575 million in revenue and the average financial metrics of the 18 AmLaw firms that advised the most companies going public last year. These are some of the most successful firms, including the likes of Kirkland & Ellis, Latham & Watkins, Davis Polk & Wardwell.

By those metrics, Initial, Public and Offering LLP during last year’s boom would have generated nearly $300 million in profits for its equity partners, thanks to a 51% profit margin—good work if you can get it.

Paying its average equity partner $4.8 million, the average among the top IPO firms, those profits could support 61 equity partners. Using the top firms’ average revenue per lawyer figure (around $1.5 million), it would take about 400 lawyers to generate $575 million in revenue. 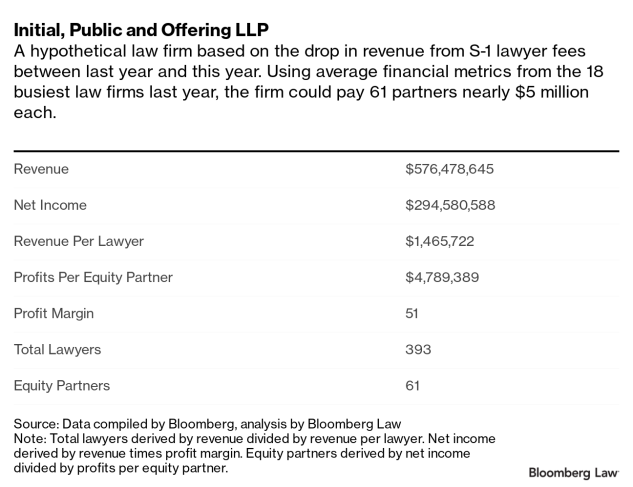 That was last year.

This year, Initial, Public and Offering LLP would be facing some very serious questions. How many associate do we need to lay off? (A lot.) How many partners are scrambling for the exits? (Without a competitor, where would they go?) Should we just call it quits and liquidate? (Probably, yes.)

These problems aren’t as dire in the real world, since the IPO market is served by a slew of firms that also handle a wide variety of other legal work.

None of the 18 busiest firms from 2021 suffered a more than 3% decline in revenue when subtracting their record company-side IPO fees last year from their total revenue.

If nothing else, the exercise shows how important it is for law firms to diversify their businesses and rely on more than one boom-and-bust-prone product line.

It also shows how important it is for lawyers to be true partners in their business. If 61 highly paid IPO partners are having a slow year, the hundreds of others in the firm need to be committed to picking up the slack. Otherwise, they’ll miss out on that highly profitable work when it returns.

On Musk’s Lawyers: Lawyers are the big losers in Elon Musk’s decision to close his purchase of Twitter as his original price, Bloomberg’s Chris Dolmetsch and Jef Feeley report. The dispute could have racked up a total of $1 billion in legal fees, a Columbia University law professor said.

On Crypto Lawyers: A federal judge in New York called Roche Freedman co-founding partner’s leaked comments about his firm’s relationship with a crypto startup “uniquely stupid,” Justin Wise reports, in a hearing that will lead to a decision whether the law firm should be booted from the case.